The anti-repression protest march of Thursday 24 of September organised by the Neighborhood Committee of Exarcheia, the radical enclave of central Athens, took place in response to increasing police pressure on the area and its inhabitants as well as recurring incidents of police brutality across Athens, culminating at the public torture of a 20 year old man on September the 5th, when tied to a tree policemen beat the man up to the point of breaking a rib and piercing his lung.

The protest mobilised around a thousand people, in stark contrast to a fascist demo in the parastate controlled area of Agios Panteleimonas the previous day where racist bigotry under heavy police protection managed to gather less than 100 people, plain clothed policemen included.

The demo in Exarcheia took place in defiance to the state-terror climate since the police raids which led to the arrest of 4 people earlier this week in relation to urban guerrilla warfare. Police has been ever since building armed blockades across Athens, and has been announcing further arrests in a pre-election stunt of efficiency by the outgoing ridiculed right-wing government.

The demo marched through Exarcheia and towards the well fortified local police station in the outskirts of the area, where 200 of the protesters attacked the premises with stones, leading to police tear-gas retaliation. Soon the melee developed into full street-battle, with flaming barricades erected throughout the area. No arrests or serious injuries have been reported. 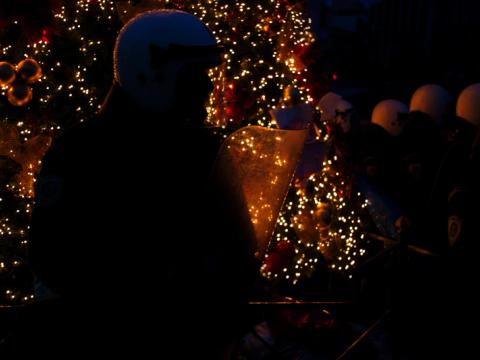 Despite escalating psychological warfare waged against the insurgency, protesters are keeping the…

Police-state threats of extraordinary measures of repression and control fail to hamper social antagonism in Greece.