Early this morning (10 September) taser-armed police from the Essex special mobile force stationed at Boreham, accompanied by a search team, entered the home of veteran Romani movement activist Grattan Puxon. They included officers who took part in the mass eviction at Dale Farm in October last year. Both Puxon and his wife Eileen were shown a warrant before a seven-hour search was made of the small cottage. Three computers, three mobile phones and quantities of files, diaries and other papers were removed. Puxon was subjected to a body search and his wife was supervised while dressing. No explaination was offered by the police beyond saying an investigation is ongoing. No charges have been brought. The search team arrived in two minibuses and a police car. A hired van was later added. At least a dozen officers were involved. Puxon was first told he could not leave the house but at about 9am was permitted to attend a doctor's appointment. 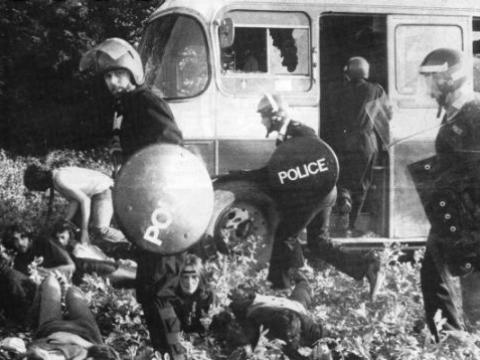 A short account of the brutal police attack on a convoy of travellers and others on their way to the annual the Stonehenge Free Festival.