The corporate plunder of Iraq

The looting of billions of dollars of Iraq’s oil wealth is unprecedented in the history of corporate crime, writes criminologist Dave Whyte.

The neo-liberal transformation of Iraq is portrayed as a humanitarian venture. Western corporations and occupying governments now talk of the liberation of Iraq from the “tyranny of Saddam’s planned economy”.

On the day that major hostilities were declared over, Tony Blair told the Iraqi people, “Saddam Hussein and his regime plundered your nation’s wealth. While many of you live in poverty, they have the lives of luxury. The money from Iraqi oil will be yours – to be used to build prosperity for you and your families.”

This has turned out to be another shameless lie. Saddam’s regime was undoubtedly corrupt, in the sense that he established a system of patronage and rewards for the elite that remained closest to him. But the scale and intensity of the corruption and fraud perpetrated by the occupation is unprecedented in modern history.

The largest part of the money spent by the US-British occupation was not US or international donor funds, but oil revenue that belongs to the Iraqi people. During the period of direct rule the US spent, or committed to spend, around £11.3 billion, most of which was disbursed to US corporations.

Of this expenditure, £5 billion is unaccounted for. From the available evidence we know that much of it has vanished into the hands of corporations, corrupt public officials and elite Iraqi deal fixers.

During 14 months of its existence the Coalition Provisional Authority (CPA) – the body set up to rule Iraq and headed up by Bush favourite Paul Bremer – issued 100 legal orders by decree.

Those orders, implemented without the consent of Iraqi people, represent a pure form of neo-liberal orthodoxy that has had profound and irreversible consequences for the Iraqi economy.

Within a few days of the order being passed, mass produced chicken legs were dumped on the Iraqi economy by US companies, forcing the market price of chicken down to 71p a kilogram, below the cheapest price that Iraqi producers could sustain.

The intention is that over 200 state owned enterprises – including electricity, telecommunications and the pharmaceuticals industry – will be sold off, permitting 100 percent foreign ownership of banks, mines and factories. The decree allowed these firms to move their profits out of the country.

Order 81 created a patent regime to ensure that agriculture would depend on foreign agri-biotech firms. It outlawed the sharing of seeds, forcing farmers to use the protected varieties sold to them by transnational corporations.

There can be no doubt that the occupation has presided over a progressive weakening of Iraq’s industrial and commercial base.

In one period between 2003 and 2004, more than 80 percent of prime contracts were given to US firms, with the remainder split between British, Australian, Italian, Israeli, Jordanian and Iraqi firms. One source estimates the total received by Iraqi firms during the CPA’s rule at around 2 percent.

The CPA managed to concentrate funds in the hands of US firms by issuing non-competitive bids. From records of expenditure we can estimate that around 66 percent of contracts between April 2003 and April 2004 were issued non-competitively to hand-picked favourite companies.

SMASH AND GRAB
The restructuring of the Iraqi economy is best characterised as a “smash and grab” operation.

The “smash” involved the imposition of a set of administrative instruments which established US and other western contractors as the prime agents of reconstruction thus marginalising and undermining Iraqi capital.

The appropriation (the “grab”) of Iraq’s oil wealth ensured that the rapid entry of foreign capital was underwritten by Iraqi revenue. It has been executed with a guarantee of immunity.

On the same day that the CPA came into being, Bush signed Executive Order 13303 which exempted the Development Fund for Iraq (DFI) – the agency set up to distribute reconstruction contracts – from all legal proceedings and judicial oversight. The order effectively granted the CPA immunity from prosecution and judicial interference.

The CPA kept no list of companies it issued contracts to, and it had no system for metering the oil that it exported and sold. Officials were authorised to disperse revenue with little or no adequate system of monitoring or accounting.

Very deliberately the US delayed the establishment of auditing bodies and then refused to cooperate with their inquiries. A full 11 months after the CPA took control of the Iraqi economy, they appointed Stuart Bowden, a close associate of Bush, to audit the authority. Bowden served Bush in the Texas ­governor’s office in the early 1990s and latterly as a White House official.

Despite the fact that the dice was loaded in favour of the CPA, the US and UN audit reports that eventually appeared still read like a textbook of corporate accounting fraud.

Iraqi oil revenue was flown in to the CPA in $100 dollar bills, shrink wrapped in $100,000 (£57,000) bundles of “cash bricks” (see picture, right of bosses posing with the cash). One CPA official has described how cash was distributed to contractors from the back of a lorry.

The use of cash payments enabled the CPA to distribute the reconstruction funds without leaving a paper trail.

One review found that a payment made by the CPA to the Kurdish regional government for £794 million was entered under the budget heading “transfer payments”.

The Kurdish authorities insisted that the money was not spent but could not provide any evidence to support this. It was widely reported that this payment was delivered by Blackhawk helicopters to a courier in the Kurdish city of Erbil who subsequently disappeared.

Apparently no one even bothered to record the courier’s name.

One audit found 37 contracts totalling more than £105 million for which no contracting files could be located. It noted a case where an unauthorised advance of almost £1.7 million was paid out by a CPA senior advisor, and a case in which the CPA appointed head of the ministry of health could not account for £346,000 worth of spending under his direct control.

A total of £5 billion of Development Fund for Iraq funds cannot be properly accounted for.

Iraqi business people report that they had to pay “middle men” substantial bribes even to be allowed to bid for contracts.

The routine kickbacks and bribes demanded by the CPA officials fuelled a culture of corporate corruption.

The lack of basic record keeping and monitoring, and the culture of cash handouts that emerged inside the CPA, created fertile conditions for corporate crime to flourish.

BAGS OF CASH
In one of the most reported cases, the private military firm Custer Battles collected £8.5 million to provide security for Iraq’s civilian airline.

Custer Battles was one of hundreds of firms that were set up specifically to get a slice of the war spoils. This company was established by Mike Battle and Scott Custer, reputedly a descendant of general George Custer of Little Big Horn fame.

One CPA official giving evidence to a US senate committee, told Custer Battles to “bring a bag” to pick up their cash.

He produced a picture of two company officials smiling to the camera as they loaded up duffel bags with over £1.1 million of Iraqi oil money.

Custer Battles never did the job they were contracted for, but ran off with the cash, using it instead to set up barrack accommodation for cheap imported labourers that they hired out to other Western firms.

Over-charging was routine in reconstruction contracts.

An audit of Kellogg, Brown and Root’s (KRB) contract to restore Iraqi oil fields found £61 million in “unresolved costs” (spending that had not been properly accounted for).

In one incident KBR charged the US army more than £15.3 million for transporting £46,500 worth of fuel from Kuwait.

This was merely one in a long line of audits that uncovered millions of dollars worth of discrepancies.

The firm implicated in the Abu Ghraib tortures, CACI International, was accused by the US General Accounting Office of billing for inflated employee hours and falsely upgrading job descriptions to inflate the wage bill.

Ghost armies of employees are everywhere in Iraq and payrolls are inflated as a matter of routine.

The invasion of Iraq was a brutal act of criminal violence on the part of Bush and Blair.

This war crime has been sustained by the systematic economic criminality of the occupying governments and their corporations.

GATEKEEPERS OF BAGHDAD
The largest part of the billions of dollars in reconstruction funds were disbursed to the US prime contractors.

The prime contractors act as “gatekeepers”, controlling entry into the Iraqi market.

Almost all of the foreign delegates at the Rebuild Iraq 2005 conference held in Jordan were doing business with US prime contractors rather than with Iraqi firms.

According to the British delegations, not one deal was tied up with an Iraqi business over the four days.

When William Lash, the US undersecretary of state for commerce, finished his presentation to the 2005 conference, he was confronted by Assad al-Khudhairi, the head of the Iraqi Contractors Federation.

Al-Khudhairi castigated the occupation for the damage done to the economy and complained that “product dumping” had forced 25,000 local businesses to the wall.

MONEY
£4.5bn – The value of contracts awarded to Halliburton subsidiary Kellogg, Brown and Root in Iraq for 2003

£1.4bn – Moeller-Maersk profits for 2004. The Danish company was awarded the contract to run Iraq’s major oil terminal. It sacked the local workers and replaced them with foreign labour

£386m – The value of contracts awarded to the Bechtel Group. The contracts will eventually be worth around £56.7 billion, to be paid from Iraqi oil revenues

* Dave Whyte is a lecturer in criminology at the University of Stirling. To read Cash from Chaos, Dave Whyte’s reports on corporate crime in Iraq, go to www.dass.stir.ac.uk/staff/d-whyte/davewhyte.php 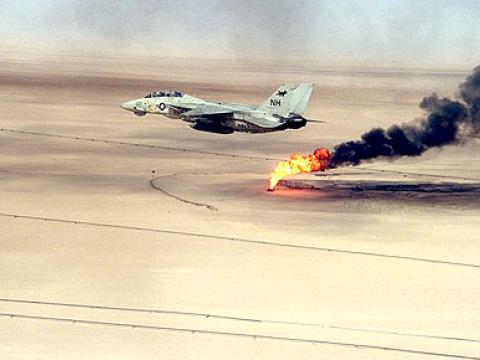 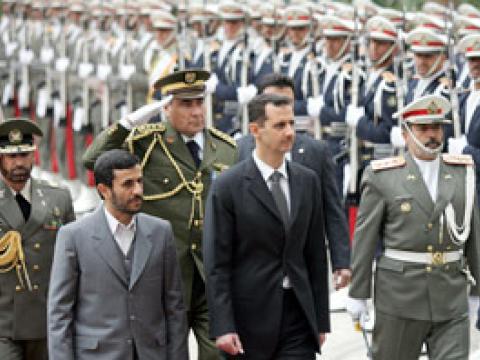 Lebanon, Iran and the ‘Long War’ in the ‘Wider Middle East’

Aufheben analyse the long-term geopolitical aims of the US in the Middle East, following the…