Ha-Joon Chang is a leading heterodox development economist. He is probably best known for his 2002 book 'Kicking away the ladder', which convincingly demolishes free market development myths. Chang shows that the countries which successfully industrialised in the 20th century were those which pursued activist state development policies. These included infant industry protection, subsidies, and protection of the domestic market. Such states, like South Korea, Brazil, China and India only opened up gradually to competition on the world market once their domestic manufacturing base was established and could effectively compete.

By contrast, states which pursued rapid and early market liberalisations and where the state did not pursue proactive industrial policies - such as the sub-Saharan African states - suffered economic stagnation and failed to build modern industrialised economies. Thus Chang accused the early industrialised states of 'kicking away the ladder', denying to the developing world the very same policies by which the US, Europe and Japan became rich.

Chang's argument is persuasive, and has the merit of matching actual historical development, where partisans of free market, rapid liberalisation can only cite David Ricardo's parsimonious theory of comparative advantage.1 But there's a darker side to state-led development. The countries which successfully industrialised all did so not just on the basis of subsidies and trade barriers, but on political and wage repression. It is no coincidence that South Korea, Brazil, China all went through, or remain in, periods of repressive dictatorship. And where wages rose, and political freedoms were won, this was a result of working class struggle, as Beverly Silver's excellent work on the global car industry shows.

In other words, Chang's heterodoxy is the other side of the neoliberal orthodoxy, but both together form the capitalist doxa. They quibble over the relative balance of state and market initiative, and the pace of trade liberalisation, but leave fundamental questions of social property relations and class struggle untouched. This blind-spot leads to theories of development that tacitly endorse political and wage repression, at least in the early industrialisation phase. Development is, after all, another name for the accumulation of capital.

This brings us to Chang's piece in yesterday's Guardian Comment is Free. In it, he argues that it's a "no-brainer" for the state and businesses to invest in productivity gains in order to boost production and raise wages. This he argues benefits everyone in the longer term: businesses improve productivity, workers earn more wages. In this view, there is a fundamental harmony of interests in society, and the problem is one of short-sighted mismanagment. The antagonism between capital and labour can be overcome by swapping Cameron for Miliband.

For Chang, this reflects Germany's advantage in productivity, which itself reflects investments in education, engineering, and technology. To see what's wrong with this perspective, we need to think about what productivity actually is. 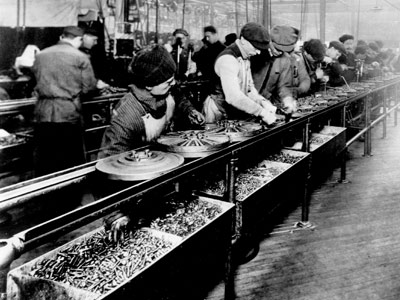 Productivity is a ratio of outputs to unit of input. Commonly, output per worker. Since - education notwithstanding - human physiological and cognitive capacities are more or less uniform, and the day is only 24 hours long - the principal way to raise productivity is to invest in machinery.2 This multiplies the output per worker. In other words, increasing productivity means moving from labour-intensive to capital-intensive production.

This means increasing productivity tends to shed labour. I could only find recent data on employment in the German car industry, showing a small decline 2001-2007. But this is even clearer when you look at Germany's competitors, like the British and US car manufacturers, which have massively downsized in order to compete. Conventional wisdom ascribes Germany's productivity to a happy social partnership between workers and employers (via the works councils). For example the BBC says:

In Germany, management and unions worked closely together in the interests of the common good. (...) In Britain, by contrast, car factories in the 1960s and 1970s became daily battlegrounds, where militant shop stewards and complacent managers fought out an overt class war.

This is in plain contradiction to Beverly Silver's detailed empirical work on class conflict in the car industry, which shows a definite link between class struggle and workers' conditions. The more strikes and riots, the bigger the economic and political concessions workers were able to extract - until firms uprooted and moved somewhere with a more repressive wage and political regime. The reality of German social partnership is more apparent by reading what the bosses have to say when talking amongst themselves. According to a German business portal report, aimed at investors:

Competitive Labor Market
High productivity rates and steady wage levels make Germany an attractive investment location. Labor cost increases have been the lowest in Europe in recent years, with a modest annual increase rate of 1.6 percent. German productivity rates are almost ten percent greater than the average of the EU’s 15 core national economies and almost one quarter higher than the OECD average. 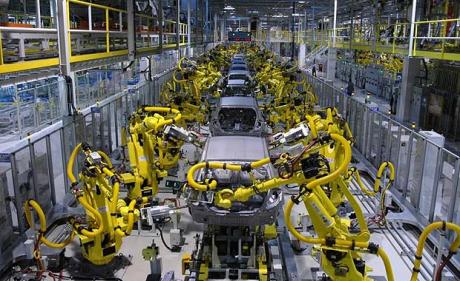 In other words, the fruits of social partnership are harvested by capital. But let's entertain Chang's argument. It is possible for automation to lead to higher wages. In heavily mechanised industry, the labour that's automated away is typically low skill, low wage assembly work, while the labour remaining is that which can't easily be replaced by machines (for now at least). You can see this dynamic in the financial sector, where automated trading algorithms have replaced traders, but created jobs for physicists and mathematicians. And it may well hold true for the German car sector too.

However, this is only a gain in productivity because it does more with less. Such jobs necessarily come at the cost of layoffs (or losses by attrition) for lower skilled workers - certainly this has been the long term trend in car manufacturing. And what becomes of the labour thrown off by capital-intensive, high productivity industry? It is no coincidence that Germany, where there's no minimum wage, has a proliferation of 'mini-jobs', with unemployment kept down by ultra-low wage, precarious work. Reuters report that "one out of five jobs is a now a "mini-job," earning workers a maximum 400 euros a month tax-free. For nearly 5 million, this is their main job."

In essence, Chang commits a fallacy of composition: assuming that what's true of a part can be true of the whole. It is true that it isn't always in capital's interests to drive down wages to the bare minimum.3 Indeed, investment in highly capital-intensive manufacturing probably does create a small number of well paid jobs. But such a productivity-raising dynamic is dependent on making production more capital-intensive, throwing off labour, and what Reuters call "wage deflationary policies" in the wider economy.

Productivity gains and zero-hours contracts aren't mutually exclusive as Chang suggests. They're two aspects of the same dynamic. The harmonious vision of higher wages in general benefiting both capital and labour is a mirage.

Great piece, as always. I do have a question, though. Keynesian economists like to talk about "aggregate demand" - i.e. that rising wages increase overall spending power and, thus, allow for continued growth. This, in fact, formed part of the argument FDR's New Deal labor policies: greater worker spending power, achieved through orderly collective bargaining, would help bring the US out of the depression.

Now, I've also heard a more Marxist take on this same thing. Namely, that capital became so productive that, in order tor to ensure the sheer amount of produce churned out could be consumed, capital was compelled allow some of that wealth to filter down into the ranks of the working class (state/superstructure) to justify further production and accumulation.

Or, in other words, capital had met the limits of consumption with in the production process itself and needed to shift some of that wealth to the producing class to purchase consumer goods. Do you think there's any truth to this analysis?

@ Chilli sause:
Have a look at this article:
Post-Work: Zombie Social Democracy with a Human Face?, and especially at the comments by Andrew Kliman at the end of the text.

Chili, aggregate demand includes state spending, so not just workers' wages, which can't be enough to stimulate the economy. The point is that the state must be active and even pursue deficit spending. /nitpickcking

To expand a bit on the points raised in the article, doesn't the myth of northern European-style higher wages/"healthier capitalism" also rely on low wage intensive labor and environmental destruction in resource extraction, transportation networks and other associated labor of the global south? To say nothing of immigrant labor within its own borders (like in the case of Germany and the extensive use of eastern/southern European immigrants in a labor base for their post-war industrial boom).

Sorry, but I thought Marx did all the spadework so we don't have to bother ourselves with all this shit. Call me 'lazy' and vulgar!

Yeah but what would you rather use in a tool in a conversation? Linking a friend this or saying 'read capital then get back to me'.

Chang commits a fallacy of composition ...such a productivity-raising dynamic is dependent on making production more capital-intensive, throwing off labour, and wage deflationary policies in the wider economy. 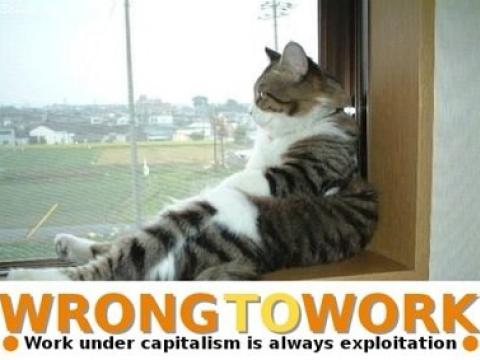