Democracy in my experience

Philani Zungu offers a brief but powerful account of the lived experience of life as a shack dweller under democracy in South Africa.

People have different definitions of democracy.

Some people say that democracy means freeing everyone to do whatever they want, regardless of rule or controls, with no instructions or boundaries, no importance to whether what is done is wrong or right.

Some people say democracy is the power of the state to decide things, acting in the interests of those who hold state power, its behaviour designed to suit their demands. In this vision, society is always in a position of compliance with orders from the state.

Some people say democracy is about rights. After the Freedom Charter was created, people came to know about their particular rights. The more they understood their rights, the freer they became. We never expected to be disappointed in turning these rights into reality. But we were.

Some people say democracy is for all of us - as society. They say it is a reason to improve and protect our lives. It is equality, whereby all should participate in building a better society and achieving a better life for all.

Let me share my experience of democracy since 1994 as a shackdweller in Durban.

I stayed with my mother, step-father and my younger brother in a small house, four by four meters. We were tightly squeezed up. The eThekwini Department of Housing decided that we could no longer build or extend shack structures. We had no choice. If we built, they would come and demolish the same day, or soon after.

I also felt the shame of women giving birth in the shacks. This they did after not attending clinic for a long time, because nurses shout at them, and when they are admitted, are not being attended to in good faith.

New to unemployment, my parents had no finance to support us; so I had to come from school and look for work, such as car washing and gardening.

I had to stop school at grade 9. When I was 20 years old, I needed to be independent, so I tried to build a house. It was demolished, and inside it was everything I owned. I was was assaulted by the land invasion unit, and had to be admitted to Addington Hospital. I was denied a right to housing.

This happened purely because it was already decided for me, in advance,without any redress or consultation, how I could live.

I was arrested for demonstrating against the lack of delivery, and lack of of consultation in 2005.

In 2006, I was arrested again. This time, I was being searched by a police officer on the way to a radio interview. I asked why I was being searched. It was a relevant question to ask, in case I might have some information to assist on a particular case. But the policeman replied that a black man is always a suspect. And then they arrested me. This time I was arrested for asking why I could not be treated like a human being, with rights, in a democracy. Once again I was assaulted, this time in the Sydenham Police station.

In 2007 I was arrested for not agreeing to treated like an animal by the police. The police had come to my home and demanded to search me after I had built myself a new home so that I and my wife and child could move out of my mothers' house where I had lived for 16 years. I had nothing to hide. I had written a letter to the Land Invasions Unit and the Housing Department telling them that I was going to build my own house and why. I just asked the police why they wanted to search me and their response was arrest. Formal warnings were issued by the Sydenham police Station.

I can see that in the future, I'm expected to accept the unacceptable. That is the reality of democracy of the state and democracy of human rights in my experience. My only remaining hope for an acceptable future is hope in the democracy of society. 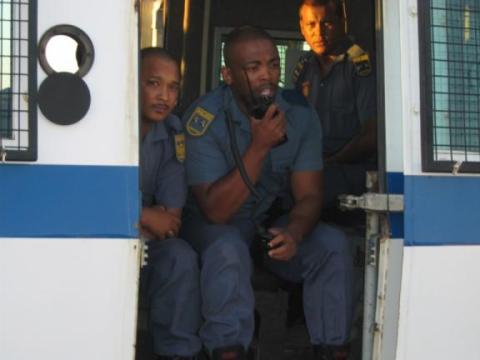