The coal heavers have refused to coal the SS Jolly George on May 10th 1920. They struck better than they knew!…The strike on the SS Jolly George has given a new inspiration to the whole working class movement. On May 15th, the munitions are unloaded back onto the dock side, and on the side of one case is a very familiar sticky-back, ‘Hands Off Russia!’ It is very small, but that day it was big enough to be read all over the world.
- Harry Pollitt, 1935

The London dockers’ boycott of the SS Jolly George was the most tangible success of Hands Off Russia! – a campaign that had held meetings and demonstrations for many months. In May 1920, dock workers refused to load this ship with British armaments bound for Poland to be used by Russia’s anti-Bolshevik White Armies. They resisted orders, and significantly, the District Secretary of the official Dockers’ Union, led by Fred Thompson, backed their action.

The dockers’ refusal to load the SS Jolly George with weapons destined for the White Terror was a powerful show of solidarity, but their radicalisation did not happen overnight. Along with Harry Pollitt, Sylvia Pankhurst was instrumental in preparing the groundwork. Pankhurst was a prominent communist and led the Workers’ Socialist Federation of which Pollitt was a member. In the months before the SS Jolly George incident they undertook a campaign of relentless agitation: handing out pro-soviet literature, making links with unions, and radicalising the dock workers. Pankhurst reportedly handed out thousands of copies of Lenin’s Appeal to the Toiling Masses around the docklands for several months beforehand, at the risk of arrest, as the text was on the Home Office blacklist. A year later, in 1921, Pankhurst was arrested and imprisoned for stirring up anti-establishment feeling amongst the dockers.

In his autobiography Serving My Time, Pollitt also credits the propaganda of an unsung figure: Mrs. Walker of Poplar.

She toiled like a Trojan. If on a shopping morning you went down Chrisp Street, Poplar, you could rely upon seeing Mrs. Walker talking to groups of women, telling them about Russia, how we must help them, and asking them to tell their husbands to keep their eyes skinned to see that no munitions went to help those who were trying to crush the Russian Revolution.

The SS Jolly George incident united anti-war, anti-arms and anti-capitalist agitation in a common goal, for a moment a least. This was in part due to the timing of events. Anti-war and anti-arms sentiment was much more prevalent amongst the rank and file workers following the devastation of the First World War. The dockers were not necessarily committed Bolsheviks; it was the threat of another war ‘of imperialist plunder,’ and its consequences for labour, that convinced them to strike.

Churchill was eventually put off armed intervention by the hostility of the workers. ‘Defence of White Russia began to be identified with defence of the trade unions against Lloyd George.’ Although it was highly unlikely that any allied intervention in Russia would have led to a full scale war, Pollitt really believed they had stopped a war, and so did many of his rank and file supporters. This illustrates the state of fear and mistrust of British military decision making at the time. 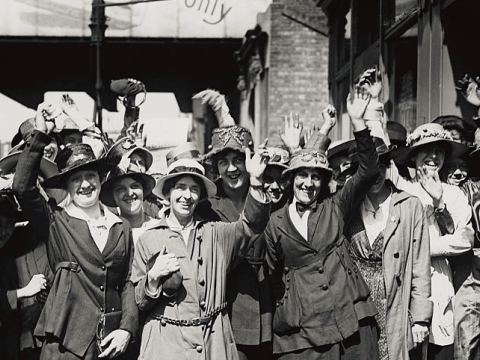