The End of San Francisco (or, how to play with its ruins)

A city is nothing more than the sum of its constraints. Its walls are at the same time the barriers to our lives and our desires. Every day, we act out a routine within its streets and buildings, but despite all our activity, nothing ever really happens. Our work, our shopping, our education, are just so much boredom, and we already know it. Our misery finds its concentrated expression in the city, and we can never really escape it. The whole show is controlled by the same people who order us around during the day--the bosses and bureaucrats who benefit from the way things are organized. But it is our habits as much as anything else that keep us where we are--we have been led to believe that everything's always going to be the way it is, and there's nothing we can do about it. However, beneath the surface there exists a hidden discontent which is only waiting for the right moment to express itself.

Yesterday, we published three posters, each dealing with an aspect of this daily life, a daily life which appears mysterious even though its actions are repeated so often. We attacked simultaneously work (Do You Ever Feel Like Killing Your Boss?)1 , shopping (Do You Ever Want to Steal Everything?)2 , and welfare (Is There Life Before Death?)3 . We also distributed a phony "survival coupon" throughout the city. By presenting each poster as an official document written and signed by various civic leaders, we attempted to call these institutions by their true names, cutting through the lies that surround them to reveal what people actually go through every day. We parodied bureaucratic language in order to expose the matters such language deliberately conceals. At the same time, we distributed a pamphlet (Space Travel)4 to commuters and bus riders, which used the same format to communicate the real purpose of travel in a direct and personal way. We pointed out that the circulation of people, like everything else in society, is determined by the circulation of things.

In carrying out these actions, we did not intend to pull off some kind of elaborate practical joke. Our aims were far more serious: we wanted to present our ideas in such a way as to make it impossible for anybody to ignore what we did, including the authorities. We used the entire city as a base for subversion, attacking work, shopping, welfare, and travel as important examples of how we all spend our time, not as isolated "problems." Our lives are largely determined a by these categories, and in communicating our disgust with the existing world, we made it clear that anything we did could only be a starting point towards the development of large-scale action against society as a whole. In a time when sideshows like the "Watergate scandal" command public attention, the real scandal of how we live has been constantly suppressed, and it is precisely this reality that our actions tried to expose.

Our goals are as radical as our methods; for us, revolution means nothing less than the transformation of everything. Unlike those who merely want to exchange one set of leaders for another, who talk of socialism and the "vanguard party" in the same breath, we want to live without bosses. We do not seek to impose ourselves at the head of any movement or to manipulate it for our own ends. If the present order of things is to be eliminated, the majority of people will have to assert their domination over the urban environment that presently controls them. To make the world truly ours--to talk to other people about the things we have always wanted to talk about--we must begin to create our own free space in the city, constructing it as a real extension of our desires. This space, however, cannot be restricted to one area; it can only be created throughout all of society in the process of radical struggle. The destruction of capitalism and the class that maintains it must be accompanied by the establishment of our own power, democratic workers' councils where all of us can participate in running our lives without outside interference. Self-management in a society we have organized ourselves is the common project that yesterday's actions have tried to indicate.

The end of San Francisco as a place of isolation and separation, then, will only come about when people abolish these conditions through their own actions. What we have accomplished may be small in comparison with what remains to be done, but from now on, things cannot continue as before. Sooner or later, people will have to pursue their dissatisfaction to its final conclusion. The spontaneous, individual revolts against authority which occur every day throughout the city, in offices, factories, and schools, must become generalized if they are to pose a genuine threat to capitalist society. The defenders of the existing order, from the tired old bureaucrats in City Hall to all the young reformers who want to "make the system work," can expect the worst. The future will belong to those who have no present. 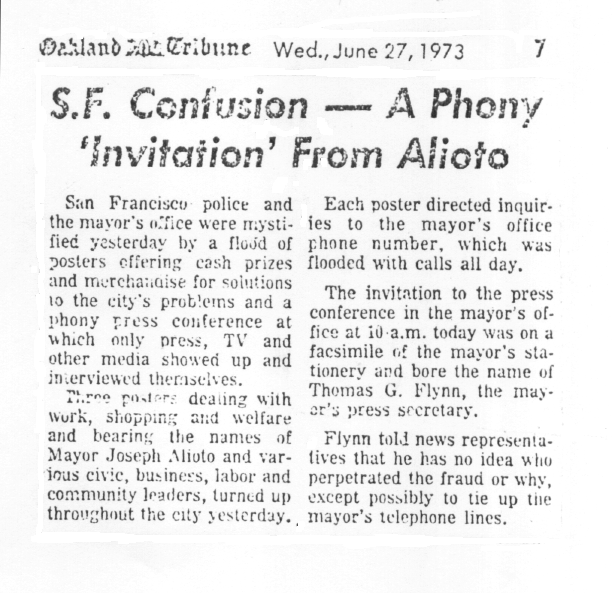 We used the entire city as a base for subversion, attacking work, shopping, welfare, and travel as important examples of how we all spend our time, not as isolated "problems." 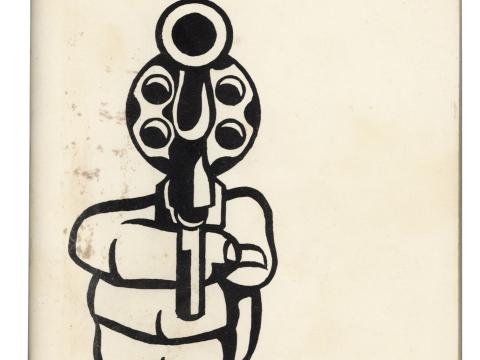 Only issue of the journal of the San Francisco situationist group Point Blank. 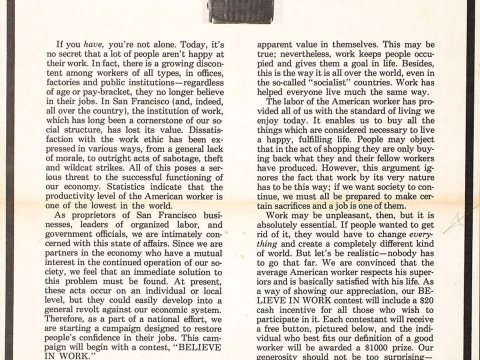 Do You Ever Feel Like Killing Your Boss? - Point Blank! 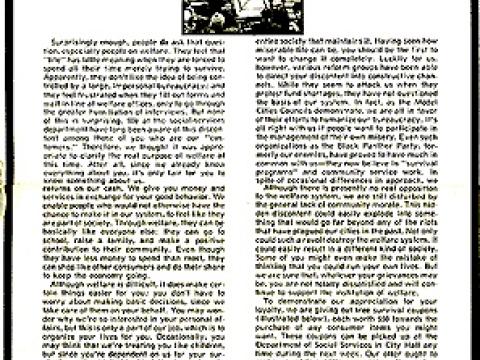 Is There Life Before Death? - Point Blank! 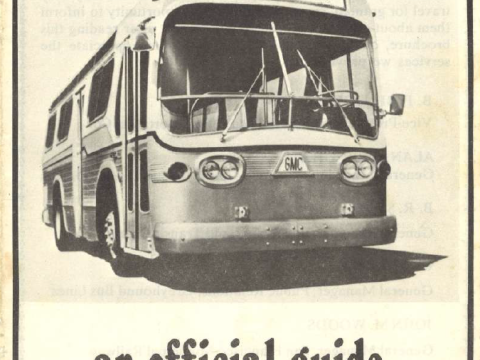