An article by Zac Smith comparing politics between Oklahoma and France.

Oklahoma and France are obviously at opposite ends of many spectrums. In Oklahoma, to be a socialist is to be regarded with curiosity and a little hostility, like a follower of an obscure, cultish religion. In France, it is no more eyebrow-raising to say, “I’m a socialist!” than it is in Oklahoma to say, “I’m a conservative!” Among the French, one never expects someone to say, “Then why don’t you move to Russia?” as a response.

Arriving in Paris last May, I was struck for the first time since reading “Das Kapital” with the sensation of being not entirely outside the political mainstream. Descending into the Métro, I saw an antipolice graffito signed with a hammer and sickle. On a subway car, I noticed a man reading Lenin’s “The State and Revolution.” He did not look like a student intellectual or a bohemian. On a train to Lille, my neighbor finding that I was American, delivered a long and complicated lecture on the principles of socialism, mostly designed to dispel the impression that socialism was synonymous with Stalinism, to which I listened patiently. This was all within the first few weeks following my arrival, and soon these things no longer seemed remarkable.

The moderate socialists I met in France had something in common with our conservatives. They displayed a casual openness about their beliefs. Even members of the Parti Communiste—a small group relative to the far more conservative Parti Socialiste— explained themselves in this easy, frank way.

Even the most confident and well-read American socialists have to declare their beliefs knowing that, likely as not, they’ll be met with a stream of wildly misinformed objections. In this environment it becomes common practice to express one’s views in a way that anticipates these objections and attempts to head them off. It is a rare person who can, having grown up in the United States, publicly express a belief in socialism without some degree of defensiveness.

However, in France the chaussure is on the other foot. One of the very few French Protestants I met, a very neatlygroomed student with whom I had lunch in a Vichy café, explained his views to me in the same defensive, uncomfortable manner common to American leftists. He was a supporter of the Front National, a major right-wing party whose platform revolves around blaming Muslim immigrants for all of society’s problems. He hastened to explain to me that Muslims make up the majority of France’s prison population and that the Front National had achieved a strong 20 percent in the last presidential election. Of course, in Oklahoma, no Republican would feel the need to follow up “I’m a Republican!” with “also, a conservative Republican candidate got 48 percent in the last election!”

It’s clear which attitude conveys a more appealing impression. Maybe then, as difficult as it may be to listen to the same ridiculous objections unfold over and over without interrupting, it is necessary to establish a relationship that is not adversarial.

Those of us who were not born into a radical household must remember the mistaken ideas we had before we discovered socialism. Just a few years ago, I believed that communism meant totalitarianism and, for some reason, that Marx and Lenin were contemporaries. In order to reach out to members of the mainstream we must engage them patiently, remembering that even though we may have heard their objections with monotonous regularity, it may be the first time they have had a chance to voice them.

We who wish to grow to a majority could benefit from carrying ourselves as if we already had. 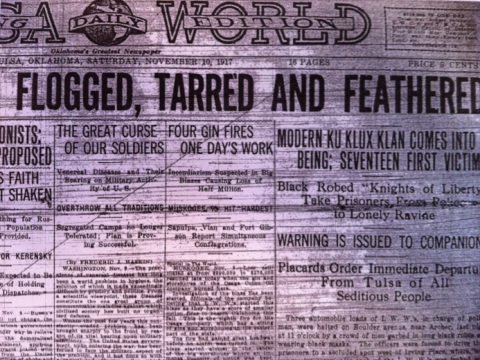 We are the heirs to the Tulsa Outrage

An article by a member of the restablished Tulsa IWW about the Tulsa Outrage, an incident in 1917 in which Wobblies were tarred and feathered by…
Image

About the CPE France blog

A short article explaining what libcom.org's coverage of the anti-CPE movement and what you can do to help.