We are the heirs to the Tulsa Outrage

An article by a member of the restablished Tulsa IWW about the Tulsa Outrage, an incident in 1917 in which Wobblies were tarred and feathered by pro-war vigilantes.

On 9 November 1917, the day after the Bolsheviks seized power in Russia, 16 IWW men sat in a jail cell in Tulsa, Oklahoma. On paper, they were convicted of vagrancy. In reality, the charge was defiance of the capitalist class.

Oklahoma was infamous as a hotbed of radicalism, home to at least three IWW locals and more members of the Socialist Party than any other state. The state’s official symbols– a red flag with a white star, and the motto, “Labor conquers all things,”– made this working-class militancy official. Oklahoma was a place of institutionalized radicalism.

Three months earlier, hundreds of Oklahoman tenant farmers had armed themselves and marched to overthrow Woodrow Wilson and end US participation in the Great War. The Green Corn Rebellion, as it would later become known, was quickly defeated, but it set authorities on edge against radicals across the state. As Judge T.D. Evans, presiding over the case of the Tulsan Wobblies, remarked, “These are no ordinary times.”

The spread of unionism among oil workers and farmers also moved Oklahoma authorities to anxiety. As ever, the press performed loyally, condemning the IWW as terroristic while simultaneously calling on readers to lynch IWW organizers.

“It is no time to dally with the enemies of the country,” read a November 1917 Tulsa World editorial. “The unrestricted production of petroleum is as necessary to the winning of the war as the unrestricted production of gunpowder. We are either going to whip Germany or Germany is going to whip us. The first step in the whipping of Germany is to strangle the I. W. W.’s. Kill them, just as you would kill any other kind of a snake. Don’t scotch ‘em; kill ‘em. And kill ‘em dead. It is no time to waste money on trials and continuances and things like that. All that is necessary is the evidence and a firing squad.”

It was in this atmosphere of working-class militancy pitted against patriotic hysteria that 16 IWW men found themselves imprisoned in Tulsa. With them was one Jack Sneed, a non-member who had been thrown in jail, apparently by accident, during a group arrest of IWWs.

As midnight approached, the prisoners were removed from their cells and driven away from the jail in three police vehicles. The New York Times later claimed that the prisoners were intended to be “taken by a roundabout route to I.W.W. headquarters,” though the IWW Tulsa branch secretary, who was among the prisoners, later told the National Civil Liberties Bureau that he believed the subsequent incident was planned ahead of time by the police.

Shortly after departing, the convoy met a group of armed men dressed in black robes and masks. They identified themselves as the “Knights of Liberty,” which the Tulsa World described as a minor offshoot of the Ku Klux Klan. The police delivered the prisoners and vehicles into the custody of the Knights, who tied the prisoners’ hands and drove them to a secluded ravine west of the city. At the ravine, they were met by a crowd of additional armed Knights.

By the headlights of the police vehicles, the prisoners were stripped. One by one, they were tied to a tree and lashed with pieces of rope until blood ran down their backs. Then came the action for which the incident would become best known: the 16 IWWs– and the one unfortunate bystander– were tarred and feathered.

“After each one was whipped another man applied the tar with a large brush, from the head to the seat,” wrote the Tulsa branch secretary. “Then a brute smeared feathers over and rubbed them in… After they had satisfied themselves that our bodies were well abused, our clothing was thrown into a pile, gasoline poured on it, and a match applied. By the light of our earthly possessions, we were ordered to leave Tulsa, and leave running and never come back.”

In the 94 years following the Tulsa Outrage, the worst nightmares of the Tulsan IWWs became reality. Oklahoma has become the X in “We must struggle so that X never happens.” For many, Oklahoma is synonymous with hopeless backwardness, its socialist history buried by an evangelical state government which, this April, proposed to alter the state motto from “Labor conquers all things” to “Oklahoma – in God we trust!” The Knights of Liberty now run things in the capitol as well as on the streets.

But the red flame of Wobbly radicalism has also returned to the Sooner State. On January 12, the Tulsa General Membership Branch was constituted with 13 charter members from across Oklahoma. We’ve spent the past four months concentrating on the minutiae of establishing ourselves– setting schedules, hammering out meeting protocol, printing assessment stickers, announcing our existence to the community at large and working to clear up misconceptions of who we are and what we’re about.

We’ve also focused on providing training for our members, many of whom are, like myself, quite new to organizing. Since chartering, we have participated in Organizer Training 101s held by the Omaha and Kansas City, Kansas GMBs, and have arranged to send a branch member to this June’s Work People’s College in Minnesota. We’re currently in the process of coordinating our own Organizer Training 101 to be held here in Tulsa later this month.

The Tulsa GMB has taken as its symbol the Purple Martin, a bird known for its alleged habit of spreading rapidly into new areas. We hope that, with the new resources available to us as a branch, we will be able to help spread the philosophy of working-class emancipation across Oklahoma. Oklahoma has never been afflicted by political moderacy. It is a place where the injustices of capitalism are sharply felt. Oklahoma ranks 45th among the states in terms of standard of living and third in terms of incarceration rate, according to the American Human Development Project and the Department of Justice, respectively. The Oklahoman people are impatient for change, and many are ready to mobilize against the immigrants, the welfare recipients and the “socialists” whom they believe to be the primary exploiters within society.

To some onlookers, particularly those unaware of Oklahoman history, reactionary attitude in the state appears monolithic and impenetrable. However, anyone who visits Oklahoma’s workplaces will inevitably hear self-describedly conservative workers express, sometimes in surprisingly specific terms, a desire for worker control of industry. Once, one of my coworkers at a Norman, Oklahoma supermarket, while complaining about our stingy wages, explained to me an idea basically identical to Marx’s concept of surplus value– and this despite her being a self-identified “hardcore Republican.” Some of the people who have been most successfully inoculated against the grotesque strawman of “socialism” are basically in favor of socialistic development.

We believe, then, that another transitional phase may be approaching– that it is not written in the stars that Oklahoma must always be ruled by the spirit of fanaticism and ignorance that incited the Tulsa Outrage. The Tulsa GMB invites the rest of the One Big Union to support us in our efforts to organize a land that is always tempestuous and often hostile, but never without the promise of unexpected new developments. 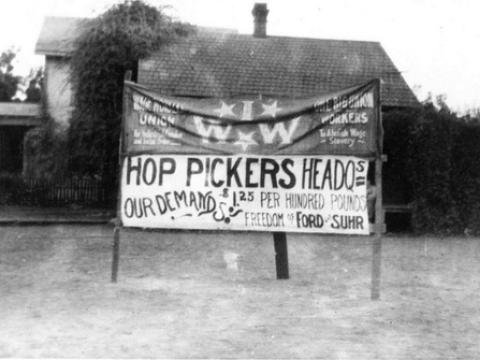 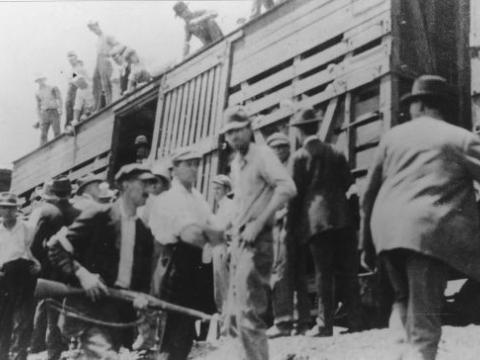 Images from the 1917 Bisbee deportation, where an armed, anti-union 'Citizen's Protective League', in alliance with law enforcement, forced…
Image 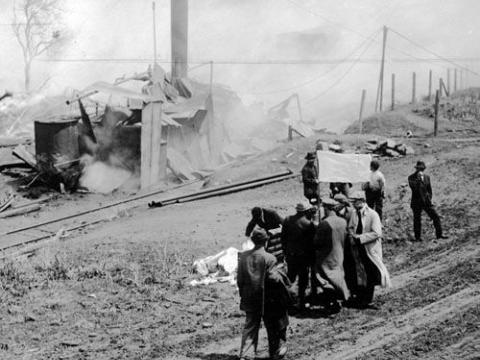 A contemporary response to the 1914 massacre of striking miners at Ludlow Colorado.