As the recession begins to bite in France, transport, education and other services are brought to a halt by a national strike demanding action on unemployment and the rising cost of living.

In what is turning into the largest such action since President Nicolas Sarkozy was elected in May 2007, the unions are demanding that the government do more to counter rising unemployment and falling purchasing power as France enters its first recession in 16 years. The eight unions represent the bulk of France’s 1.9 million-strong unionized workforce. Unions only represent a small proportion of the workforce in France, but strikes are always observed by many more workers.

“The government needs to change its methods,” Jean- Claude Mailly, general secretary of the Force Ouvriere union, said today in an interview on Canal Plus television. “There are real worries about purchasing power. All unions are united on the need to take action.” Roads around Paris were packed with cars in the early hours of the morning as commuters sought to get an early start to avoid traffic jams. Fewer train lines were in service and as many as 30 percent of flights in and out of the French capital were cancelled. Unions plan 200 demonstrations and protest marches in cities across the country later today.

Employees of companies including Electricite de France SA and French units of International Business Machines Corp. and Hewlett-Packard Co. are among those participating in the strike. Public schools are expecting as many as 70 percent of their employees to strike, with unions for teachers, doctors and other civil servants asking for “urgent measures for employment and wages” and a further boost to the economy.

Popular Backing
Unions say measures announced by the government so far are inadequate. Sarkozy unveiled a 26 billion-euro ($34.4 billion) economic-stimulus package in December. About 69 percent of the French people back the strike, according to a poll by CSA-Opinion for newspaper Le Parisien on Jan. 25. Forty-six percent support the strike, while 23 percent “sympathize,” with the union call, Le Parisien said. Of those interviewed, 12 percent were opposed or hostile to the strike. It’s the first time in Sarkozy’s presidency that a “social movement” has had such public approval, Stephane Rozes, head of CSA-Opinion told the daily.

The French economy, the euro area’s second largest, may contract 1.8 percent this year, the worst performance since World War II, the European Union projected on Jan. 19. Companies are cutting jobs as the credit crunch derails purchases of homes, cars and factory machinery. The EU sees France’s unemployment rate at 9.8 percent this year and 10.6 percent next year. The number of jobseekers in France has risen for seven months, recording the biggest jump on record in November.

Train Traffic
Societe Nationale des Chemins de Fer Francais, or SNCF, France’s national railway, where workers began the strike last night at 8 p.m., said about 60 percent of the regional TER train services and 40 percent of high-speed TGV lines will be disrupted. Eurostar and Thalys services to London and Brussels are running normally, SNCF said. All overnight domestic and international trains have been canceled except for a Berlin- Paris train arriving in the French capital on Jan. 30. Up to 50 percent of domestic high-speed services from and to Paris and 70 percent of the Corail domestic trains were canceled, the railroad said.

RATP, the Paris transport authority, said the city’s subway service was normal on about half its 14 lines. On the remaining lines, service ranged from 50 percent to 75 percent. One out of five RER A regional trains was running, with no service on RER B. Three out four buses were running.

Calls for Concessions
DGAC, the French aviation authority, recommended that airlines flying into and out of the Paris-Orly airport pare flights by 30 percent, while those going through Paris-Charles de Gaulle by 10 percent. Air France-KLM Group said last night that it plans to maintain all long-haul flights, while canceling 30 percent and 10 percent, respectively, of its short- and medium-haul flights from Orly and Charles de Gaulle. Power and gas supplies may be hit after EDF and GDF Suez SA employees said they are participating in the work stoppage. Previous strikes have led to lower electricity output at power producer EDF. French Prime Minister Francois Fillon earlier this week dismissed calls for concessions to appease the strikers. “It’s not the government’s role to make gestures,” Fillon said on France 2 television. “It’s the government’s role to keep reforms on track.” 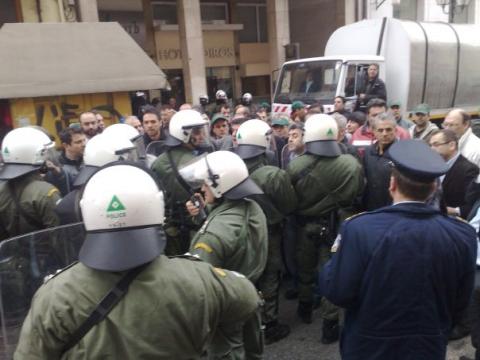