The launch of what unions have labelled an 'indefinite' strike in Nigeria, has led to many injuries and deaths as security forces clash with strikers and protestors. Despite Nigeria having substantial oil reserves, petrol prices have more than doubled in a week, in a country where the vast majority of the population live on less than $2 a day.

Violence has erupted today in Nigeria. The police have clashed with protestors who are demonstrating over rising fuel prices. So far the violence has seen at least six people killed.

As part of a general strike, tens of thousands of people have taken to the streets throughout the country. Unions are claiming that it is the start of an ‘indefinite strike’

In Kano, one of Nigeria’s largest cities, thousands of people surrounded the state governor’s office. The police responded by firing tear gas at the crowd, and shot live rounds into the air.

Protestors set several vehicles alight, and attempted to burn down the home of the chief of the central bank, before security forces intervened. Protestors then moved onto the office of the secretary of the state government, causing severe fire damage.

The Red Cross have reported treating 30 people in Kano, including 18 for gun-shot wounds. Two of them later died of their injuries.

The government have imposed a night time curfew, yet thousands remain on the streets. At the moment, it is unclear whether security forces will enforce the curfew.

Violence has escalated across many other cities in Nigeria. There are numerous reports of police brutality, with many people being treated for gun-shot wounds.

The strike is in response to the government’s decision to end fuel subsidies on January 1st, which has meant that petrol prices more than doubled overnight. This rise has had a profound impact on the vast majority of Nigerians, who live on less than $2 a day. As you would expect, the ‘knock on’ effect of fuel rises has been the sharp increase in the price of food

The government has proudly announced that the countries daily oil production of 2.4 million barrels has not been affected. One of the main complaints of Nigerians is that Nigeria should a relatively wealthy country based on its revenue from oil. However, none of the wealth has been passed on to its people. Rather, it has been creamed off by generations of corrupt governments, leaving ordinary Nigerians in squalor.

Unions have criticised the shootings and police brutality, and have vowed to ‘push ahead’ with their strikes, stating that, “The federal government unleashed its security machinery against the people”.

Troubles in Nigeria have been exacerbated by on-going religious violence between its Muslim and Christian populations.

Indefinite? No shit. Anyone know what percentage or the country are unionised and if the strike has been respected outside the unions?

More details on the struggle are available here: http://www.marxist.com/nigeria-not-a-kobo-increase-in-fuel-price.htm

Posted this on the other thread but thought I'd chuck it here as well as it's interesting.. some Nigerians in London protesting:

As well as a blog post and photos from a neighbourhood protest in Lagos..

Watch from minute 27 - a nigerian describes the role of religion in reinforcing corruption within the state, and passivity on the part of the population...

One of the main complaints of Nigerians is that Nigeria should a relatively wealthy country based on its revenue from oil. However, none of the wealth has been passed on to its people. Rather, it has been creamed off by generations of corrupt governments, leaving ordinary Nigerians in squalor.

Corruption of what? The problem is our occupation by Property!

Nigerians took to the streets across the country for a fourth day running on Thursday to protest against the government's decision to remove popular fuel subsidies, which more than doubled the price of petrol.

As tens of thousands joined demonstrations, unions showed no signs of backing down on their threat to paralyse the country with an indefinite strike and shut down oil production in Africa's top crude producer.

Industry officials doubted unions would be able to stop crude exports completely, but even a minor outage could have a significant impact on the economy.

Nigerian oil unions vow to paralyse output to back strike

The Nupeng union said today it has withdrawn its workers from oil fields, while the other, Pengassan, said yesterday it told its 24,000 members to “be on red alert” in preparation for a shutdown of fields operated by companies such as Royal Dutch Shell Plc.

Jonathan’s move to abolish the subsidy on Jan. 1, which more than doubled gasoline prices, is key to government reforms needed for an upgrade of Nigeria’s B+ rating, Christian Esters, a sovereign analyst at S&P, said in a phone interview from Frankfurt yesterday.
[...]
“Getting rid of the fuel subsidies is part of that reform program,” Esters said. “The potential upgrade is linked to whether the government implements its reform program.”

Two Nigerian trade unions accused the country's president of using "armed thugs" to attack protesters, and urged demonstrators to continue their nationwide strike against high fuel prices on Wednesday and beyond.

"In a Mubarak-style response to the peoples' protests, the Jonathan administration brought into Abuja, thugs armed with various weapons including guns," the Nigeria Labour Congress and the Trade Union Congress of Nigeria said in a joint statement late Tuesday night.

Most of the country supports not just the strikes but also the Occupy Nigeria movement which seeks to seriously challenge the status quo and once and for all end the rule by kleptocracy.

On Monday 9 January, the first day of the Nigerian nationwide indefinite strike, my fellow blogger, Emmanuel Iduma, wrote a post 'See, The Nigerian Revolution Has Begun'. Emmanuel is a young man, a writer, modest and maybe a little shy. Sometimes there is hesitancy about his writing, as if he is not quite sure whether the stone he steps on will bear his weight or if his foot slips he will maintain his balance. But the important thing is, he never fails to take that step. 'See, The Nigerian Revolution Has Began' is an eloquent, assured statement of a young Nigerian at the point of a new beginning. Behind him lies years of scorn, thievery, greed, opportunism, political thuggery, untold violence, scammers, the occasional great football team and some of the world's most innovative and accomplished musicians.

'The revolution has begun. I am part of it. Do not be fooled that it begins and ends with placards, strikes, Twitter hashtags. I am certainly wiser than that. Yes, I will keep hashtagging, placarding, striking, until I am convinced that I have been de-stereotyped. Until I am convinced that I am not a matterless blur in the narrative of my country.'

Yes, we can play football and we can make music and dance! But now we can also make revolutions, or can we?

For me, well I am older, though not necessarily wiser, and most definitely less optimistic. It's day nine of Nigeria's uprising and the sheer energy, rapidness and velocity of hundreds of voices seconds apart on Twitter is exhausting. So reading anything that is at least one paragraph or more is sheer relief. I have noted two types of writing on the uprising. Those that stick to the superficial and easy summations repeated from similar commentary on Tunisia and Egypt and those that try to look deeper and raise questions relevant to the geopolitical entity called Nigeria. I am not a historian of revolutions, but since when were revolutions not predominantly acted by young people with a few elders thrown in for good measure? Hardly an original observation. My intention here is to attempt to provide a summary of what has taken place to date and to raise questions by bringing together some of the facts and analysis...

Labor leaders have rejected the Nigerian government's concession Monday to drop fuel prices after a nationwide strike paralyzed the country last week. Abiodum Aremu of the Nigeria Labour Congress said the group will only accept a return to prices before the government ended fuel subsidies on January 1.

Fuel prices used to be about 65 nairas (40 cents) per liter, but the end of subsidies doubled gas prices and sent the costs of other goods skyrocketing.

"Given the hardships being suffered by Nigerians, and after consideration and consultations with state governors and the leadership of the National Assembly, (the) government has approved the reduction of the pump price of petrol to 97 nairas (60 cents) a liter," Jonathan said in his speech.
[…]
But Aremu said his group will only accept the previous fuel price of 65 nairas per liter.
[....]
Union sources are calling for citizens to continue protests Monday in the form of "sit-ins" at home and in neighborhoods -- rather than in main city squares, for security reasons -- even though the government ordered all federal civil servants to report to work or risk losing their jobs...

Edit: but lots of reports on Twitter that the NLC has now called off the strike. I'm not sure if this is confirmed. 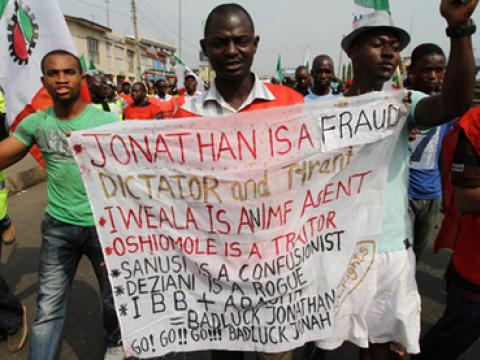 Nigerian unions have issued the government with an ultimatum. Either re-introduce the fuel subsidy that was scrapped at the beginning of the…
Image 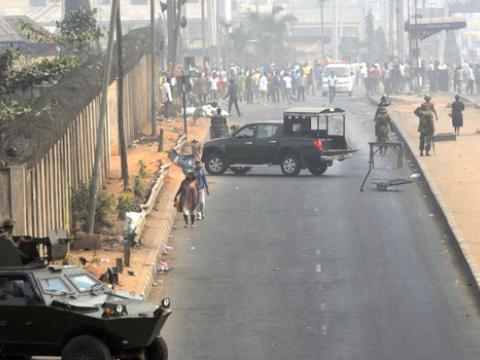 Nigerian unions have called off their national strike after a turbulent week. The Nigerian government have been forced into a partial climbdown,…
Image 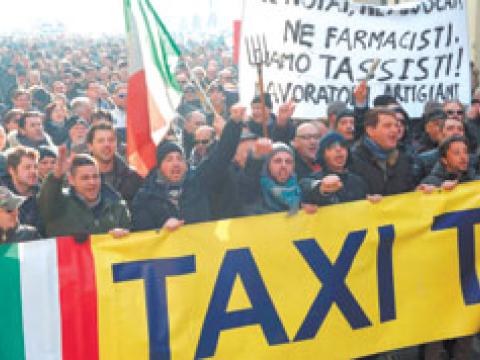 Taxi drivers and truckers across Italy set up road blocks in a protests against record fuel prices,…
Image 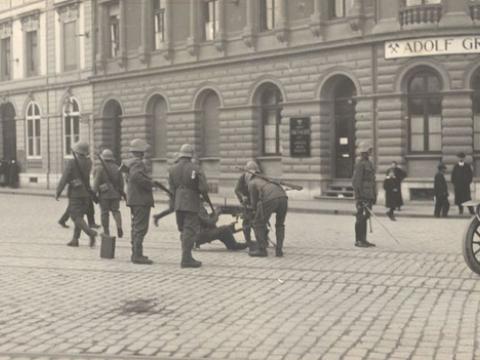