In the spring of 2013, a 40 day strike by 500 dockworkers at the Hong Kong Port aroused massive support in Hong Kong society and throughout the world. The target was one of the world's richest and most powerful men - oligarch Li Kai-shing.

The Hong Kong dockworkers, suffering years of frozen wages and inhumane conditions, divided by a subcontracting system meant to deflect labor unity, with no legal access to collective bargaining, in heart of the global capital's leading city... struggled and prevailed, giving us a clear view of the power of workers against not merely one boss, but a system that is generating inequality everywhere it spreads. Their tenacity, militancy and ultimate victory provides a moment of inspiration for citizens and workers universally.

Stephan Chan is a rank & file dockworker, employed as a sub-contracted checker in the Kwai Tung terminal. He helped to organize the Union of Hong Kong Dockers (UHKD) in 2005 and served as its first chairperson. He remains one of the core leaders of the union and played a vital role during the April 2013 strike.

Loy Wong is an organizing secretary of Hong Kong Confederation of Trade Unions (HKCTU), with more than 12 years of experience in the trade union. He leads the organizing and support work for unions in the transportation and logistics sector, including the Union of Hong Kong Dockworkers.

The San Francisco event will have an additional speaker, a docker from Chile:

Nelson Leopoldo Francino Valdes has been the president of the FeTraPI, the Federacion de Trabajadores Portuarios de Iquique, and has served in this position while being a rank-and-file casual at the Port of Iquique since December 2012.

The Union Portuarios de Chile, which is the national port federation, has had several important nation-wide strikes in the past couple of years; the most recent being in January when a three-week strike at the peak of the agricultural harvest and export season won the dockworkers back-pay for stolen lunch breaks.

The Union Portuarios de Iquique is a member of this federation.The Port of Iquique is important strategically in the global trade of copper as it's Chile's biggest export node of that commodity; Chile exports more copper than any other country.

I attended the event in seattle last night and it was great to hear these brothers testimony and build solidarity with workers from across the ocean. Their strike was a success in some regards but they clearly still have a long way to go to organize the port terminals in Hong Kong. They kept driving the point home that regardless of any wage increases or improvements in working conditions that were made, one of the real "treasures" of the strike was seeing direct democracy in their work place.

Here are some pictures of the event in San Francisco on Tuesday night (April 8, 2014): It was a great presentation by the Hong Kong and Chilean dockers and there was a lively discussion afterwards.

And Nelson talking about his strike: [youtube]f06zkLiDTOo[/youtube]

Just to say, this shit looks fucking sweet and I'm also pretty amazed even just by the fact of having workers from three different countries in a room talking about their experiences together.. is there any more info on what their unions are like? Are they like ILWU-style or something else? And was there any discussion about future international cooperation?

(Sorry if this is discussed in the videos, not got round to watching them yet but def will do asap)..

Here is a report I wrote of the San Francisco event:

About 40 to 50 people came last night to the HERE Local 2 hall in San Francisco to hear Stephan & Loy from the Hong Kong Dock Workers Union & Hong Kong Confederation of Trade Unions, as well as Nelson Francino from the dock workers union in Iquique Chile.

Stephan & Loy talked about the 36 day dock workers strike which was the first strike in Hong Kong since 1997. They explained that wages for dock workers in Hong Kong had declined quite a bit since 1995. Most of the port terminal in Hong Kong is controlled by a major tycoon, Li Ka Xing, who also owns many port terminals in China & is a major real estate developer in Hong Kong. After pressing Li unsuccessfully for wage increases and against their long hours, 200 dock workers struck initially & were then joined by others. The union had been begun some years before as a small organizing group. They say that now their union, which includes port truckers as well as crane operators & others has about 700 members, but this is still only 10 percent of the dock workers in Hong Kong. So they are still a "minority union" at this point tho they may be a majority in certain terminals.

The strike began as a stay in strike in the terminal but they were forced to move to picket lines outside the gate by court injunction. Stephan explained that they did not want workers to be subject to attacks by the police. They then moved to a public occupation of space in front of Li Ka Xing's main corporate headquaters. In this case they were able to resist a court injunction against their occupation by claiming the space was public not private. After their victory in the strike, Loy pointed out there then many strikes by dock workers at ports in China, starting with the second biggest port in the world, at Shenzhen, where workers won a 30 percent wage increase.

Stephen & Loy referred to their union approach as "social movement unionism," meaning alliances with other social groups.They said that the student union in particular provided them a lot of support. When they were asked about the politics of the union, Loy, who described himself as a "revolutionary socialist," said the unions have formed a Labor Party in Hong Kong & he then described a sort of traditional socialist (social democratic or Marxist) division of labor between unions being "purely economic" and politics being limited to the party.

Nelson, who was translated by our compa Pablo, talked about how the struggle in Iquique began over the issue of being forced to eat amid gasoline & other nasty chemicals. He said they are in a fairly strong position because most of the country's copper exports go thru Iquique, which is located far to the north in the region that had been captured by Chile's army from Bolivia many decades earlier. Most of Bolivia's imports & exports still go thru this port. Nelson pointed out that once they had struck the strike eventually began to gain synmpathy strikes from other ports, which he said is part of their union constitution, which requires workers in all ports to strike if any port strikes. However, he said the strongest support to their struggle was international solidarity. In particular the docker unions in Spain, Portugal & Italy told the Chilean government they would boycott all ships from Chile. Only then did the Chilean government negotiate with them.

Ed... the Honk Kong Dockers are definitely at the beginning of a very long journey. Their strike from my understanding was only in one terminal and hasn't yet spread to the other terminals and ports in the region. So economically speaking, their strike didn't really pinch the country, but it did raise the standards somewhat for all the workers in that terminal including truck drivers and security guards.

International solidarity and assistance or guidance from maritime / port unions is absolutely vital here. They still do not have a collective bargaining agreement and the pay raises and working conditions weren't born out of negotiations... the company just announced through news media that the workers would be receiving raises. Several of their strike leaders have been fired without returning to the job and the political atmosphere in the country granting workers rights is ever changing and fledgling at best. Further complicated by Hong Kong being designated a "special economic zone."

Actually, the 40-day strike of the Hong Kong dockers at the Kwai Chung Container Terminal last year was preceded by strikes at several of ports around Shenzhen in 2007. Those walkouts were by 300 crane operators over wages and working conditions and the workers formed a "representative" union, but without collective bargaining rights -- and under conditions where the right to strike was removed from Chinese labor law in 1982.

Kwai Chung Terminal, part of Hongkong International Terminals (HIT), is operated by Li Ka-shing's Hutchinson Port Holdings, as is Yantian International Container Terminal nearby in Shenzhen. At the latter, 250 crane operators and 800 workers went on a 2-day wildcat, on September 1 and 2, 2013, over pay and a promise to subsidize their children's education. They won a 30% raise!

Then, on the other side of Shenzhen facing the Pearl River Delta, 400 dockers went on strike over pay at the Port of Shekou, from September 17 to 26, 2013. They won an increase of 500 yuan per month.

So the Hong Kong dockers strike was preceded by radical rank-and-file action, 6 years before across the former border in China proper, and their actions last year spawned 3 other strikes -- all of which won substantial pay raises (the third was mentioned by Loy at the Chicago and San Francisco talks, but we've yet to determine which Pearl River Delta port it occurred at).

Also, remember that Hong Kong and Macao are "Special Administrative Regions," not to be confused with Shenzhen, Zhuhai, Shantou, Xiamen, and the entire province of Hainan, which are the original "Special Economic Zones" of China.

I followed some of those strikes you mentioned from a distance a few years back but listening to these workers was really the first time I had been exposed to a lot of this information. Thanks for your insight. 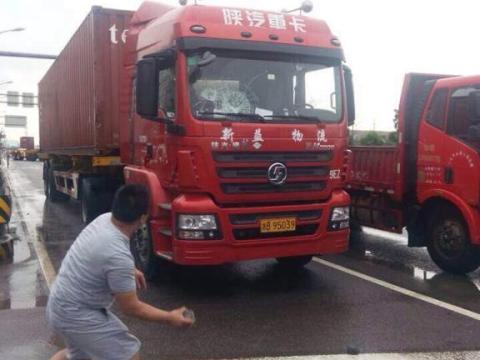 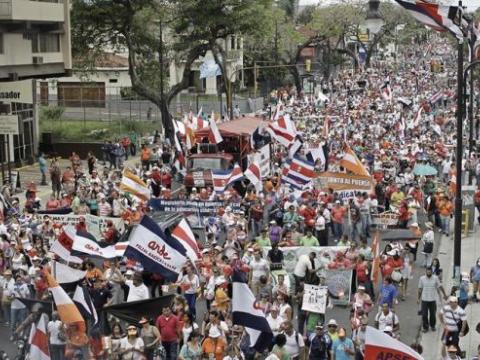 A docker strike on the island of Martinique, started on October 20, 2014 at the main port in Fort-de-France, is over the health and safety risks…
Image 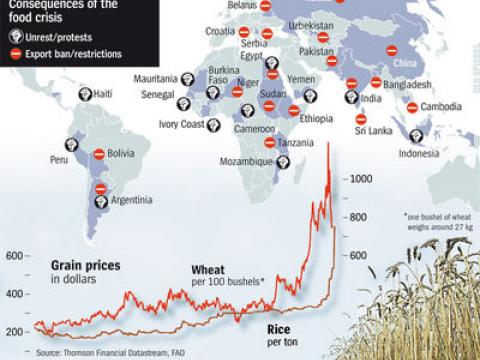 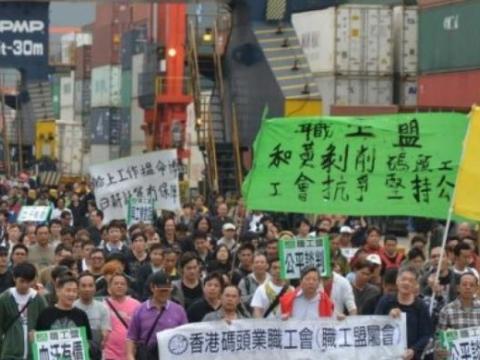