The Iva Valley miners strike and massacre at Enugu colliery, 1949

On the 18th November 1949, 21 striking miners and a bystander were shot dead at a British government-owned coal mine at Enugu, Nigeria; 51 were injured.

On the 18th November 1949, 21 striking miners and a bystander were shot dead at a British government-owned coal mine at Enugu, Nigeria; 51 were injured.

The miners were fighting for back-pay owed to them for a period of casualisation known as ‘rostering’, later declared illegal, and had been sacked following a work to rule. They occupied the mine to prevent a repeat of the lock-out they had suffered during the 1945 general strike. Because Enugu was home to the Zikist independence movement, which included Marxists and other radicals; police were sent to remove the mine’s explosives, accompanied by Hausa troops drafted in from the North of the country; whose language and even their uniforms were unfamiliar to the Igbo miners.

Local Igbo constables fraternised with the workers, they were sure the government would pay them what they were due; in return the miners assured them they did not want to fight. They would not obstruct the police from removing the explosives, but refused to help because it wasn’t their job. They had strict work demarcation imposed by the British, these were hewers and tubmen: “This job is for timbermen, some special labourers, he should call them.”

Nigerian Coal had been of strategic importance during the war, and continued to be vital in the re-building of infrastructure by the post-war Labour government, who sought to maximise output in the Sterling zone to pay off its debt to the U.S. Many of the men had served in the British armed forces, veterans of guerrilla warfare in Southeast Asia. In 1943 with inflation raging they had been called on to make up the shortfall in the British coalfields caused by the war. They were acutely aware they had saved Britain’s arse and been led to believe their sacrifices would create a better world, whilst their bosses were planning for a future that didn’t exist.

They used their regular income to develop their communities, establishing the self-help mechanisms once familiar to mining villages in Britain, which were the inspiration for the welfare state, with free hospitals and relief funds for injured workers and their dependants. The Enugu Colliers supported maternity clinics, road building and clean water supplies. Rejecting the British government’s mass literacy programme, designed to prepare their children for a life of menial labour, they created permanent, stone-built primary and secondary schools. These commitments were undermined by the economic uncertainty of rostering.

The aspirations of these workers collided with Labour’s reconstructive ambitions and its cold war paranoia, plus the racism of the colonial management, desperate to maintain their privileges. As they had done at home Labour wanted to integrate trade unions into the state, using them to contain and defuse class struggle. The Colonial Office recruited hundreds of T.U.C. bureaucrats and despatched them around the empire to institute modern industrial relations practices. In this they were thwarted by the colonial officials, who considered African workers unworthy of political representation. The Igbo themselves had no use for the concept, their culture of open assemblies and mass meetings lent itself to Syndicalism; judging union leaders simply on their ability to execute the will of the workforce. Their Zikist General Secretary, Okwudili (Isaiah) Ojiyi, used his detailed knowledge of colonial labour law and thorough understanding of its political context to run rings around the bosses. Because striking was illegal he imported the Durham miners’ ‘ca canny’ go-slow tactic, translated to ‘welu nwayo’ in Igbo and spent many days in the mines teaching it.

A T.U.C. advisor named Curry tried to insert a layer of bureaucracy between Ojiyi and the rank and file by splitting the union into five occupational branches, in violation of Igbo organisational principles. They therefore interpreted this as the creation of five autonomous unions, rendering the negotiating structure redundant. The hewers began a wildcat go-slow, were sacked and occupied the mine, followed by the tubmen.

The violence was initiated by a British policeman called Captain F.S. Phillip; terrified of Africans and fearful of communist subversion, he spoke neither Igbo nor Hausa. The miners had tied strips of red cloth to their helmets and clothing to show their solidarity; to Phillip these were paramilitary insignia. As was their custom, facing the mass of armed troops they began to dance and chant to keep up their spirits. Philip panicked and shot dead a young hewer named Sunday Anyasado who had recently married and moved to the area. He then killed a machine man, Livinus Okechukwuma. Hearing the noise, tubman Okafor Ageni ventured out of the mine asking “Anything wrong?” and was killed on the spot. The firing continued for several minutes, some miners were shot in the back. Dead and wounded alike were left where they lay; blacksmith Emmanuel Okafor told Philip: “I surrender, take me to hospital”. Philip answered: “I don’t care” and walked away.

Those eighty-seven rounds sounded the doom of the British Empire; Labour’s strategies of using intermediaries to buffer class anger, and separating industrial disputes from their political context had blown up in its face. The ethnic, regional and even class divisions in Nigerian society were temporarily set aside, replaced by a collective momentum to do away with British rule.

“The radicals and the moderates, the revolutionaries and the stooges, the bourgeoisie and the workers, sank their differences, remembered the word Nigeria and rose in revolt against evil and inhumanity.”

We are indebted to Dr Carolyn Brown, for information and sources. 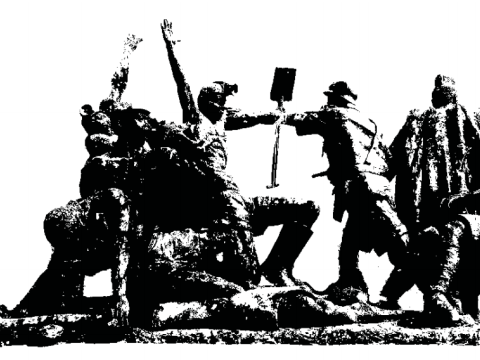