A look at the growing revolt against the CPE

A quick overview of the struggle so far over the new French labour law liberalisation package the CPE over the past few weeks.

French Prime Minister Dominique de Villepin unveiled the CPE on the 16th of January. He said that urgent action was needed to bring the French labour market into the modern era. The law would see employers hire 18-26 year olds on two year contract that would allow them to fire the youths without notice, and without explanation

In response, student union bodies called for a week of meetings and mobilisation from 30th january including a call for a national day of protest for the 7th of February. Between February 4th to March 6th, staggered two week holidays occured which the governmant hoped to exploit by passing the legislation during. Come the 7th of February between 200,000 and 400,000 youths and trade unionists took part in 187 demonstrations across France.

Unions had hoped for a larger turnout and faced with a month of student holidays, momentum could have stuttered. Nevertheless, a second day of action was called for the Tuesday 7th of March.

From early February a grassroots movement of students began to occupy campuses, strike and blockade their univsitiy buildings.

By the 7th of March, roughly half of France’s universities had been occupied. On this second day of national protest up to a million high school students, higher education students and young workers took part in demonstrations throughout France.

Campus occupations have since continued, sporadic incidents of direct action, blockades and protests have been taking place all over France including the symbolic occupation of Sorbonne University which was subsequently evicted by 1000 baton wielding, teargas firing riot police. 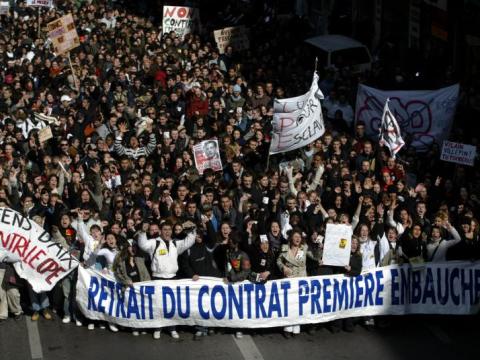