New Report on Repression of the Landless People's Movement in Johannesburg

This statement, from the Landless People's Movement (LPM), welcomes the new report and links to a pdf of the report.

As a society we are not dealing with the issues that affect the poor. The councillors do nothing for the poor.

Billions of rands have been spent on stadiums and other costs for this World Cup yet we remain in shacks and without electricity. They said 'Feel it, it is here' but we have not felt anything other than the pain of poverty worsened with the pain of repression. The money that should have been spent on upgrading our communities has been wasted. The tournament will be over on Sunday and we will still be poor.

It is clear that in this country development is something that is imposed on the poor from above. Very often what is called development is actually forced removal. If you don't agree to be forcibly removed you are treated as an enemy to the government of the country.

We have no choice but to keep struggling. We will not be intimidated by the councillors and their police. We will, together with all our comrades in the Poor People's Alliance, continue our struggle for land and for freedom.

Report on Violence Against the Landless People's Movement (1.45 MB)
Image 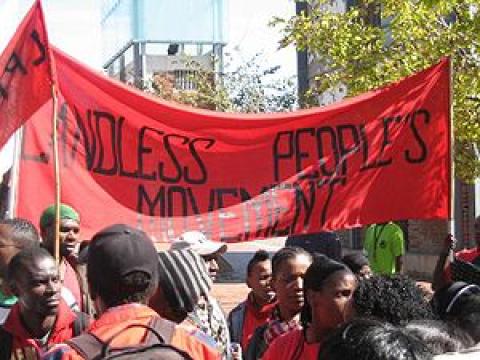 On Saturday one Landless People's Movement activist was killed, another seriously injured and many more beaten and arrested in a vicious police attack in the eTwatwa settlement in Johannesburg. Early on Sunday morning the homes of two LPM activists were burnt down as the attack on LPM degenerated into what threatens to become a full fledged ethnic pogrom in the settlement.
Image 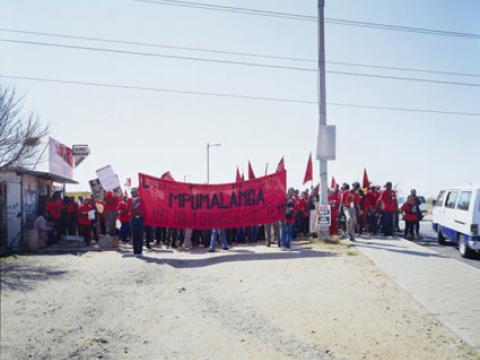 The crackdown on the Landless People's Movement in Johannesburg continues. Two LPM militants have…

The climate change revolution will not be funded

Jared Sacks on the civil society/NGO exploitation of grassroots organizations at the United Nations COP 17 meeting on global warming in Durban.