Most of the arguments against voting point out (rightly) that it achieves nothing. This is reflected in slogans such as "if voting changed anyting, they'd abolish it" and "whoever you vote for, government wins." I'm writing this post to focus on the other problem with parliamentary democracy - namely, that it is worse than useless.

See here for a longer post of mine on the theory behind anarchist anti-electoralism. Also worth a read is my exposition on why you can't fight the cuts by voting.

However, despite often agreeing that the ballot box doesn't change anything (even if their literature and party leaders are happy to say otherwise), leftists argue that elections serve as a way to galvanise people. It is one of the few times when many people get political, and gives us an opportunity to engage with them and draw them into campaigns. Not to mention that socialists in parliament can use that position to campaign and propagandise around what's occuring outside of parliament.

Except that getting people to meetings, knocking on doors and so forth can be done just as easily around an issue as around a candidate. In fact, it may even be better, because it gets people talking about ways to tackle a given problem away from the ballot box and offers an opportunity to engage on the idea of taking direct action.

Too many people have illusions in electoralism, and to be frank it's one of the reasons that a mass direct action movement hasn't taken off in the UK. The entire left pumps its money and resources into chasing votes because their focus is party-building, and that way lies new foot soldiers, more subs, more funding to pay full timers, and more paper sales. It also reinforces the illusions people have in voting, because whilst leftists in theory have a (slightly) more radical end than liberals, they advocate largely the same useless tactics.

Meanwhile, those movements and organisations based on direct action remain tiny and marginalised. Both because of horizontal organisation and because of direct action as a tactic, we are able to punch well above our weight - workfare being one contemporary example - whilst the left and unions punch well below theirs. But imagine what we could do if, organised in the same manner around the same ideas, we numbered in the thousands?

Me and you might not have the resources to do that, nor most anarchist groups, but that's another problem with illusions in elections - those with the resources are pouring them into voting campaigns. That's why electoralism is so useless. Not only does it not change anything, it draws massive amounts of time and money away from the things that do.

Agreed. Although this is more the case for countries that use First Past The Post than for those that rely on Proportional Representation: in Scandinavia, for example, elections make more of a difference in the way the society is run, because voters can choose from a more diverse list of parties. There are still downsides, but it works better than what we've got here.

No it doesn't, because whatever parties are in power they do what capital dictates

You've probably already mentioned it elsewhere, but there's also sometimes the need to appear 'respectable'/ appeal to middle class voters and dilute one's manifesto as illustrated by Paul Massey who's running for Salford mayor, particularly in areas which have been gentrified over the years.

PS. The turnout for the last electiony thing in Salford was 18.1%

Here's an interesting factoid - scroll down and look at the technical data for London Assembly results (if you have software to read .xls files that is) and look at: Blank (no votes cast)

These deliberate abstentions closely rival the votes cast for UKIP, and that doesn't include spoiled ballot papers or the number of people who abstain by not going to the polling station or not registering to vote. That's about 1/60 of voters. Deliberate abstentions in the mayoral elections are about 1/200. The turnout for both elections was about 45%.

A good case here for getting some press/radio publicity for the principled decision not to actively vote for a representative, methinks.

No it doesn't, because whatever parties are in power they do what capital dictates

I should clarify that what they do fits in the window of what capital dictates, limited by what the working class will let them do.

"if voting changed anyting, they'd abolish it" said it myself many times but have been less keen since an old German-Jewish woman told me how she had been to busy to vote against the Nazis as she thought everyone would see Hitler was mad. So, honestly, what would you do if the BNP looked likely to win power through the ballot box?
I am not saying we should stand for elections but I think this phrase confuses folk as they see that sometimes it does although they are increasingly frustrated by the politicians taking the piss.

I suppose I would say vote if you like but expect to be ripped off.

If we took a tack of "Democracy- is there something missing"
or "Parliamentary democracy is rule by politicians, we want real democracy, that's direct democracy" it might be easier to get for ordinary folk.

We are on a winner with the anti-politician stance, they are loathed, we just need to say clearly what we are for as well as what we are against, in fact I would rate it more highly.
"Don't trust your leaders they always let you down" is 99.999% right of the time so more reliable.

As for the rest of the left- who cares, there are too few of them and they are so discredited we should not waste time on them. eg the communist party is under a 1000 members and the trots must be less than 10000 and Labour left, left. 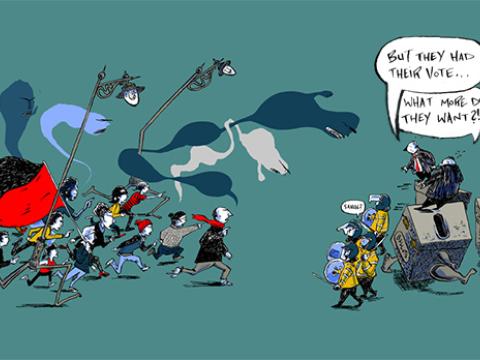 People died for your right, not your obligation

Why the pledge from the Labour Party to axe the Bedroom Tax doesn't mean we've won and, if we take it at face value, could mean that we lose.
Image

“The real enemy?” Why we should reject left unity as a concept 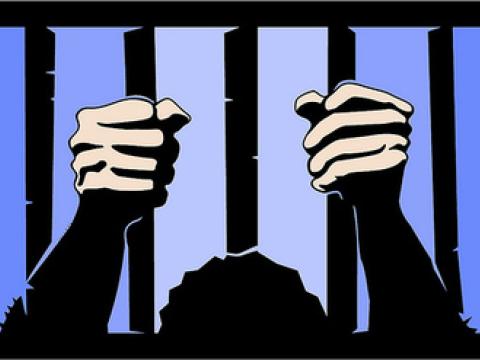