The power of the councils - Point Blank!

If we are radical enough to imagine the reality of a situationist revolution, we can also think of its consequences. Up until now, the situationists have been unique in their willingness to speak of the positive aspects of proletarian revolution, but even in this respect very little has been said about the concrete problems which will arise in any practical attempt in self-management. While we have no desire to create any sort of blueprint for revolution, these questions cannot be dismissed out of hand; if we can talk of the workers' councils of the past, we can also talk of those in the future. Unless self-management is viewed theoretically as a contemporary possibility, it win remain as an easily distorted myth. The facility with which situationist theory can be turned into an ideology is shown most clearly in the psittaceous repetition of certain phrases and certain traditions in current 'situationist' texts. From now on, we are the enemies, not only of the pro-situs, but of those situationists who are merely procouncilist.

The absence of sustained practical experience in councilist organization necessitates a far-reaching theoretical debate on the nature of such organization. A similar debate was initiated after the Russian and German Revolutions by Korch, Pannekoek, Gorter, etc., but the results obtained during this period have long ceased to be directly applicable in practice. Raoul Vaneigem's Notice to the Civilised Concerning Generalised Autogestion (Internatonale Situationniste No. 12, reprinted in ANARCHY No.7,1972) represents one of the few attempts after Pannekoek to theoretically pose the questions faced in any revolutionary situation where councils emerge. Based on the experiences of May '68, Vaneigem's theses are important, hut altogether tentative; much of the piece is concerned with a theoretical vindication of Fourier and the analysis of a future councilist power is somewhat facile. Pannekoek's prescient observation that "when the workers seize the factories in order to organise production a number of new and difficult problems arise also" (Workers Councils) has not been invalidated by the technical progress of the bourgeois economy. The development of modern economic forces, while enabling a radical resolution of problems of communication, distribution, etc., has also created a situation not anticipated in previous councilist theory. The rapid decline in the productive sector of the proletariat in advanced capitalist countries has rendered the traditional model of councilist organization, the factory assembly, obsolete.

The shop floor can no longer be considered as the primary base of councilist power. The occupation of the factories will form only one of many initial steps towards the conquest of society by the proletariat -today in most advanced economies, the actual productive sector of the working class constitutes a minority of the proletariat as a whole. Thus, the task for a councilist revolution, which seeks to establish a total democracy over society, will be to involve, not only the factory workers, but all of the proletariat in its activity. The present economic reality of bourgeois society cannot be radically overcome, however, by a simple quantitative proliferation of the councils throughout all areas of the proletariat. The councilist form itself must be re-examined in view of a contemporary definition of the "means of production".

It is no longer possible to talk only of workers' councils in the strict sense of the term. The conventional image of workers' soviets is as archaic today as the Bolshevik Jacobinism which defeated them was 50 years ago. Since the tasks of any councils which will arise in the future must extend beyond the sphere of production, the councilist form itself must extend beyond the work-place. In any period of revolutionary occupations, it will be necessary to distinguish between several types of councils - productive, service, neighbourhood, etc., - but such a distinction in no way resolves the difficulties posed by total revolution. The councils will inevitably eliminate various 'parasitical' sectors of the economy arid this elimination will liberate large numbers of the proletariat from work. At the same time, however, it will destroy the councils in these areas and will entail the incorporation of those displaced within other organisational structures. Vaneigem's proposal to merely "open the factory gates" to those not involved in a vital capacity retains an outmoded conception of the functioning of the councils and is, in fact, elitist There can be no 'vanguard' of the councils, no 'centre' of self-management; the revolution will be in the hands of a majority or hierarchical divisions will reappear despite the most democratic principles.

The organization of the councils must be such that they embrace all of society. Assemblies will have to be constituted not only in work areas but in other areas as well. The delineation of the various tasks, powers, membership, etc., of these different forms of organization will be one of the first priorities of the assemblies. Following this, perhaps the greatest difficulty for the revolutionary proletariat will he that of avoiding any kind of parliamentarism in the organization of the councils. The concept of revocable, mandated delegates will remain a purely formal principle until it becomes a practical reality. Even such a realisation, though, does not ensure the success of direct democracy. Delegated authority, however accountable to a democratic base, always contains the possibility of developing in opposition to a power without mediators. In any revolutionary situation, bureaucratisation will remain a very real contingency - one that must be confronted, not only through the rotation of delegates, but through an awareness of the hierarchical tendencies which are likely to develop. certain forms of organization (co-ordinating committees, etc.) will be delegated with more authority than others and, as a consequence, must be closely supervised by the general assemblies. Only the continued, active participation of these assemblies and, hence, the proletariat as a whole will prevent the possible rise of any councilist bureaucracy.

The ability of the councils to solve the question of their own organization will determine the success of self-management. In any case, the process whereby the operation of society can be reduced to a "simple administration of things" will undoubtedly be long and complex. The power of the councils will have a meaning which can only be supplied by the revolutionary proletariat - the councils are its power and it is there that the problems raised by theory can be answered. At present, we can only dispel the illusions which will face such a power; its real obstacles can only be overcome in practice.

Digitised by Subversion, with some minor corrections by libcom.org

We recognized... that very little theoretical elaboration had been made concerning problems that would confront future workers’ councils; the article The Power of the Councils was intended to renew discussion of this crucial issue. Yet the article in no way goes beyond “the psittaceous repetition of certain phrases and certain traditions in current ‘situationist’ texts” (p. 88); it only invents new phrases. The finished product is merely a drawn-out restatement of our ideas about what needed analysis and expansion; analysis and expansion themselves are lacking. This kind of reified language appears repeatedly elsewhere in the journal, just as it does in our “practical” projects.

- from a critique by former members of Point Blank!.

Those interested in other texts by Point-Blank and subsequent texts by former members of that group can contact me at the email address below. Our complete archives (including all texts published by PB, our response to Shutes, break with Knabb, etc.) will be posted at the Collective Reinventions website in the near future. The archive will also include several rare texts written and published by PB members after the group folded its tent in 1975. These will include At Dusk and La guerre civile en Pologne, 1976 (Paris), available in French and English. Copies of the latter two publications can
be obtained by writing CR at the same email address.

Samotnaf can abstain from writing. But Fantomas can!

Current activities can be found at:

our response to Shutes

Will you be responding to Gina Rosenberg as well, who co-wrote the scurrilous "Disinterest Compunded Daily" text with Chris Shutes, or do we have to wait another 37 years for that?

Hate to break the news, Old Man. Gina Rosenberg was never a member of Point Blank.
I have no idea what became of her, nor do I care. Our published response was to the
both of them, but I guess you never found out or bothered to ask someone who wrote
90% of everything published by PB.

But why bother inquiring at the source, when you obviously claim to know the whole
story.

Variety is the spice of life.
Despite having distributed Point Blank! in the UK almost 40 years ago, I've never had a feud with DJ, never even met him, heard his voice or seen a photo of him (though his avatar on other threads is a wonderful painting) - just found it ridiculous that he felt the need to get emotional about something that's 37 years old (not here, but on another thread where he refers to the Shutes/Rosenberg text as "scurrilous"), implying that the text still gets under his skin and that he hasn't changed or made progress over that period of time, despite his co-written At Dusk pamphlet, which had some good points amongst bad ones (unlike the wholely useless rhetorical defence of PB, presumably solely by DJ, against Shutes and Rosenberg's text which, like most things from the past, is also not something worth seriously defending: the traditions of the past weigh like a nightmare... etc.). Nor did I say Gina Rosenberg was a member of Point Blank, just that he omitted mention of her as a co-author of "Disinterest...". As for the 90% of the stuff being written by you - you clearly deserve a medal - but I'm surprised that Chris Winks and all the others only wrote 10% ; surely that fact alone indicates a certain hierarchy, no?

Despite all that, I think the text on Oaxaca by Collective Reinventions, which maybe was more of a collective effort (?), is the best thing I've seen on that uprising. 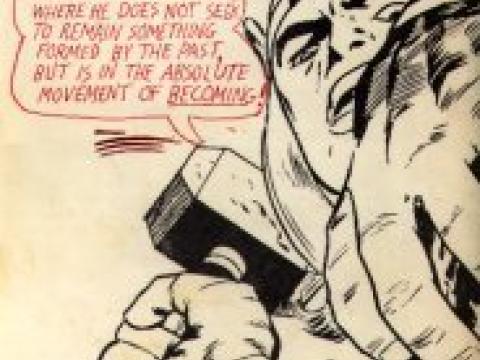 The changing of the guard - Point Blank!

US Situationist magazine Point Blank!'s 1970s article on capitalism and the spectacle.
Image 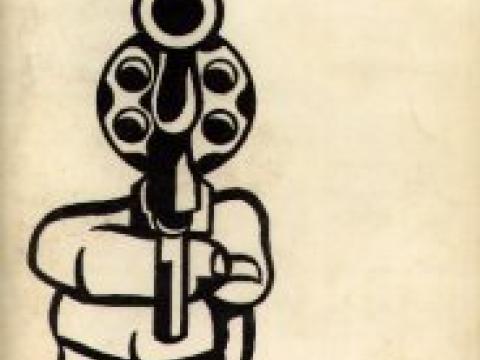 The Show Is Over! - Point Blank

From 1970s situationist journal, Point Blank! Analysis of the state of the world and the class struggle in 1972. Subtitled "Theses on the end of…
Image 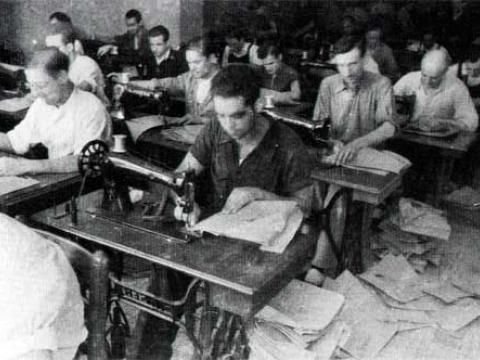 Self management and the Spanish revolution - Point Blank 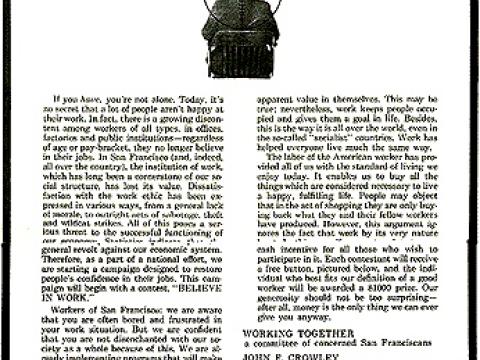 Disinterest compounded daily: A critique of Point-Blank as a revolutionary organisation and a few proposals for the supersession of situationism