On the evening of 21st July people of the Collective against Expulsions (based in a squatted Social Centre in Brussels) held a peaceful torch-lit march at the detention centre in Steenokkerzeel, near the Brussels airport. The refugees inside started to chant and scream. The warders reacted immediately by beating the detainees, including women and children. The prisoners weren't intimidated, and fought back blocking the doors of their cells. In the tumult they smashed a window, and dozens jumped through. Twenty-nine even managed to escape through a hole that had been cut in the fence.

17 activists were arrested and locked up, first in the camp itself, then transferred to the federal police jail in Zaventem. They were accused of 'inciting fire by night', 'conspiracy', etc.

The action in Steenokkerzeel had been prompted by another attempt to deport Semira Adamu. Her story is just one example of the inhumanity of the current refugee policy (in fact a hunt, imprison, and deport policy).

Semira Adamu is a young Nigerian woman who fled to Belgium some months ago. She was escaping a forced marriage to a 65-year old man with several wives already. On her arrival in Belgium she was immediately imprisoned in Steenokkerzeel and her demand for asylum was refused. Her solicitor made an appeal on humanitarian grounds, but this didn't stop the Office of Foreigners trying to deport her anyway. A first attempt failed thanks to her courageous resistance and the action at the airport by members of the Collective against Expulsions.

On Tuesday morning, they made a second attempt. At 7am, they dragged her out of bed without any warning and took her to the airport. They wanted to put her on the plane to Lome (Togo). Happily, at that moment some people of the Collective were at the airport and convinced a passenger to protest. As a result the pilot refused to take her. Semira was taken back to Steenokkerzeel. That night the Collective protested at the detention centre.

Seven escaped Sans Papiers [asylum seekers, immigration detainees etc] were captured the same night, the other 22 are still free! All 17 of the activists arrested have been released, but 7 have been charged with 'infringement of article 77 of the law on foreigners' and 'damage to state property', other charges may follow.

The squatted social centre was evicted as a response by the government but has since been re-squatted.

A lawyer for a successful Sudanese escapee, still on the run, apparently complained that now his client had no chance of being allowed to remain on compassionate grounds. This attitude is naïve beyond belief. The Belgian authorities have shown that they have no compassion. A message posted to A-Infos list said,

"We are not sure if Semira is still in Steenokkerzeel but the State still wants to expel her. The latest news is that on August 11 there was a fifth attempt to deport her. After the escape the government strengthened the already strict measures: no more visits, letters, telephone calls."

They asked people to try to contact her at the detention centre. The message continued "Semira is a remarkable and courageous woman, she keeps fighting, and encourages others to resist and fight back. It is common practice to chain and beat those who resist deportation. This is a letter that Semira wrote just after they tried to deport her for the second time:

"6.30 am., 21st July 1998, a lady called Soyan woke me up, and said that 1 have to go back to my country, and that I have 20 minutes to pack up my things. I did not even take a shower and I forgot some of my things because I was in a hurry. So finally I was ready and they escorted me to the front side, where I was searched first and then entered in the bus that took me to the airport.

Reaching the airport they tied me up twice on my arm and once on my leg, and then they put me in an isolation room, They locked me until 10.30 am, then they came and said that we are going to the aeroplane. We got to the mouth of the plane, and we stood there until 11.15 am when they now asked me to go inside the plane.

Getting inside I started screaming, crying and they all gathered around me, eight of them, Three of them just stood there looking at me while the other five tried all their best to get me seated in the plane. Two Sabena-security and police or immigration, I don't know, were the ones trying to put me down, they were pressing all over my body and one of them was pressing my face with a pillow, he almost suffocated me. It was a very terrible experience.

Finally the passengers interfered and they had to take me down to the bus. It almost result in a fight in the flight So while I was down in the bus I saw one of the passengers dragged out, it was the guy that was particular about my bags, that they must take them out. They took the guy to a van and after some few minutes the came to me with the guy. This guy told me that he wanted to help me, that I should just go inside the plane and that he was going to collect my documents from them, and that he would pay for my ticket to come back here. But I refused and I told him that I will not go anywhere, so they took the guy back to the plane and took me back to the isolation room in the airport.

After some time they took me to the centre and still put me in isolation, from 12 to 4 p.m. on Wednesday. I was in the isolation room when they brought in some others... They tried to escape, they were Precious, Bonsu Aaua, Cytia and Antila We all had to stay in the same small room with only one bed and with a toilet in it. We had to call them to flush to toilet after we used it, they flushed it from outside. They took me out on Wednesday and brought to the centre, but to the other side because our side was damaged So presently I am in the other wing and upstairs. Things are just the way they used to be, except for the tight security now, and for the airport, the people there can kill."

On 24th September Semira was killed by the Belgian immigration authorities as they tried to deport her again. She was suffocated as they tried to keep her quiet. On 17th August the Collective had tried to prevent the expulsion of Precious, a 23 yr old Nigerian friend of Semira. She was one of the escapees who had been caught the same night and imprisoned in the women's prison in Brussels. When they tried to deport her to the airport, a group tried to stop the van by throwing paint at it. They did not succeed, two people were arrested and released after two days, but they face some charges. Another group went to the airport, but in vain: Precious was deported.

Write solidarity statements to: Centre Sociale, Av. de in Porte de Halle 2 - 4, 1060 Brussels; email: [email protected]) The Brussels Collective against Expulsions have a homepage (in French), check out for more information, to sign the petitions: http://www.altern.org/ccle 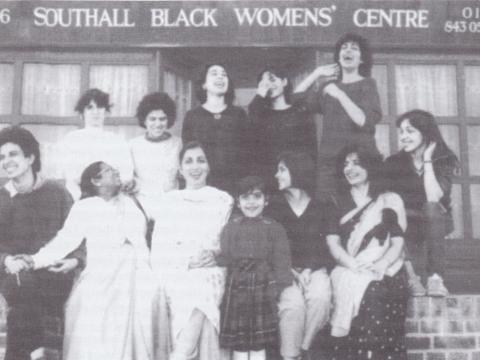 Southall Black Sisters are a black women's group that were formed in the late 70s and are still going strong today. They have campaigned…