Jump Across the Border: Antiracist Camp in Germany - Black Flag

Between 24th of July and 2nd of August, close to Rothenburg, about 20km north of Goerlitz in Germany, 300 people gathered at the "Jump Across the Border" action camp. It was called by the different antiracist and antifascist groups in the "No one is illegal" campaign to protest against European migration policies under the Fortress Europe Schengen Agreement. The site was chosen because it is less than a kilometre from the Polish border and there is a Bundesgrenzschutz (BGS Federal Frontier Protection Police) station and a Police Academy in Rothenburg. The camp's aim was to publicise the situation of refugees at an EU frontier and to exchange experiences. Held a few weeks before German elections, the camp was also an attempt to intervene in the ongoing public debate about racism and migration issues. The "no one is illegal" campaign demands freedom of movement for everybody.

Early Tuesday morning, activists established two new border crossings across the Neisse river near Goerlitz. In the south east part of former East Germany today there are 10,000 new border patrols to detect "illegal" border crossings. The German police were confused, but Polish military guards managed to arrest two activists and cut the new bridges under construction and seized the beta version of the pan-European ferry boat.

Simultaneously, a press conference took place to stress the right of free movement for everybody and to proclaim free access for all to Europe. In the afternoon some dozen campers on bikes led the field of the regional cycling tour called "Sachsendrundfahrt" in "no one is illegal" tricots. In Goerlitz they crossed the finish line 10 minutes before the professionals.

In the evening a discussion took place about the number of deaths along the new wall along Fortress Europe. Flight assist-ants (called 'coyotes' on the US-Mexican border), who were recently arrested, told of their motivations and experiences. Flight assistance has a long tradition in Central Europe: During fascism hundreds of thousands of refugees from Germany were smuggled into neighbouring countries, during socialism this enterprise was supported by the former West German government. Since 1989, flight assistants have become public enemy number one. Even worse, the Border Police statistics claim up to 70% of their arrests come from information provided by local residents. This posed a difficult question for the camp: on the one hand, the activists want to inform the local population with 20,000 copies of a free magazine, while on the other hand the camp policy is to protest against this dominant popular mentality of fear of "criminal foreigners" and to fight against collaboration with the police. The main aim is to support those people who offer the incoming new citizens some discrete help on the most dangerous part of their travel.

The camp started with a rave, attended by 800 people mostly from the region. On Monday the camp, joined by an all-Italian reggae sound system drove to Goerlitz stopping on the way in every village to hand out the newspapers. Afterwards, a demo took place in Goerlitz. Under the slogan "Jump across the Border", Germany's most famous basketball player, Henning Harnisch, played a symbolic game with the city youth in front of the monument for the victims of fascism, dating back to the communist era. Taxi drivers and supporting vehicles cruised through the area of Goerlitz, because there have been several court cases against local taxi drivers who can be sentenced to two years in prison for transporting refugees within German territory.

On Thursday and Friday the programme was changed because the night before, 7 refugees from Kosovo had died after being chased by the border patrol. 16 people were injured and brought to hospital. Around 4.30 a.m. border police had set up a control 16 km behind the border-line to the Czech Republic. The driver of the bus tried to escape, but after a short chase he hit a tree. Shocked by the news, the participants of the camp decided to go immediately to Freiberg, near the scene of the accident. Three people went to the hospital and visited four of the injured refugees in police custody. In a while it became clear that the authorities were trying to stop the refugees from applying for asylum. On Friday and Saturday some activists again went to Freiberg to get in touch with the other refugees. They managed to get the UNHCR involved and the Czech authorities refused to take the injured refugees back.

Thursday night a very special event took place in front of Goerlitz prison, where a lot of refugees and Poles are held. Controlled by a time fuse, two sound systems, hidden in surrounding old houses, suddenly started playing music, explaining about the camp and the background of our activities to the people inside. At the same time an antifascist video screening started on a main square. Two groups prepared separate actions, both in front of hotels in the area. One of the hotels is owned by "Sorat", a luxury hotel chain which sells food to asylum seekers at extortionate prices. The other hotel is the yearly venue of the neo-fascist elite and advertises conference rooms in neo-nazi publications.

Friday afternoon they took the camp's garbage to the hotel entrances. One group gathered in front of "Sorat-Hotel" in Goerlitz, the other group went from the camp in a car-convoy followed by lots of police. The convoy managed to Lose its police escort and the campers dumped their garbage in front of the hotel.

Friday morning, the city of Rothenburg got a wonderful present. "Fit for Flight Assistance!" was the title of a keep-fit trail with 12 different exercises we opened around Rothenburg and along the Neisse river. Because the inventors of the project expected a lack of sportsmanship from the police, the re-opening of the keep-fit trail in the internet will come soon. On Saturday morning there was a final regatta on the Neisse river, which borders Germany and Poland. While the border police expected us in the city of Goerlitz and assembled there, the protestors went to Bad Muskau, 20km downriver: a group with boats and banners entered the river 2km before Bad Muskau, and were accompanied into the city by a dozen swimmers carrying wooden cases, each with one letter of the slogan "no one is illegal".

At 1 a.m. they gathered on and under the bridge of Bad Muskau and informed the inhabitants about the aims of this extraordinary borderline occupation under the slogan "Schengen sprengen" (blasting the Schengen Treaty). In fact the border-line seemed to blast, when several dozen swimmers started an amazing water ballet to latin music from the sound system. The people on the bridge and in the houses applauded. When the police finally arrived, by helicopter, they wanted to arrest people for illegally crossing the border, but after some wrangling gave up. The protestors returned to the camp, where the atmosphere was a bit tense with the news that neo-nazi gangs had called to threaten the camp. After rumours all week some nazis really came, but stayed a few hundred metres away. After two hours 30 frustrated nazis left in their cars. 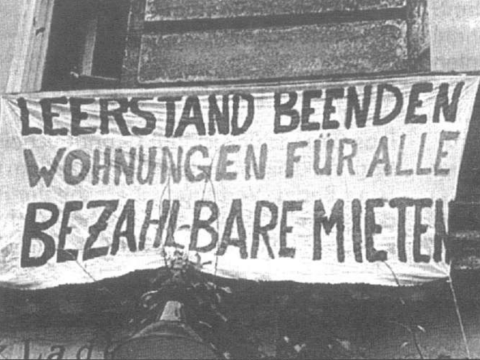 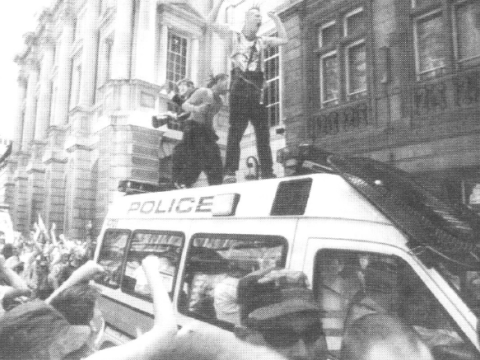 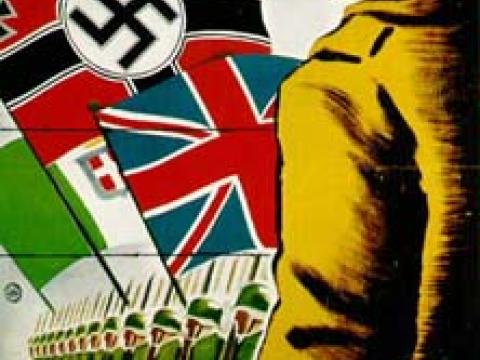