The second day of the anniversary of Alexandros Girgoropoulos murder was marked with protest marches, occupations and large scale riots in major greek cities.

Monday was the day of pupils as pan-educational marches against police brutality and in memory of Alexis were staged in all major greek cities with the Teachers Union and ADEDY (major umbrella union) calling a 3-hour labour stopage to allow people to attend the marches.

In Athens, people started gathering at Propylea at 12:00. Quickly a mass of 13-17 year old pupils attacked riot police forces gathered on Akadimias street. The pupils first attacked the cops with oranges but soon escalated with use of rocks and broken marbles. The police was forced to retreat many times in a rain of projectiles before the march finally started its way towards the Parliament. During the clashes before the beginning of the march 9 people were arrested. Riot police forces came soon again under attack by protesters and resorted to extensive use of tear gas. More clashes occurred before Omonoia square. The 10,000 strong march continued to Klafthmonos square where the march halted due to riot police forces positioning themselves along its sides on the pavement. Marchers demanded the immediate removal of police forces, and started moving only after this was granted. The march then reached Syntagma square and the greek parliament. On the way back to Propylea the march found the university asylum blocked by riot police forces which engaged the front of the march forcing the protesters to move towards Omonoia, many seeking refuge at the Polytechneio. Clashes between protesters around the Polytechneio and police forces ensued throughout the afternoon, until the Polytechnic occupation made an exodus in the form of a march at around 18:30 towards Omonoia square where more clashes took place. Unlike yesterday there was no use of the delta-team in the repression operations.

In Salonica a 5,000 strong protest march took to the streets of the city and was soon attacked with tear gas by the riot police triggering a response in stones. When the march returned to the Polytechneio, delta team police thugs broke into the university asylum with their motorbikes and threw tear gas canisters into the building, detaining several people. As a response to the third violation of university asylum in the city during the last three days, protesters occupied the rectorial headquarters of the Aristotelian University. Later a protest march was formed against police brutality and marched again on the streets of the city.

In Ioannina more than 1,500 people marched in the streets of the city attacking capitalist and state targets. Battles developed between the protesters and the police after the former attacked the courts of the city.

In Larissa a thousand strong protest march took to the streets of the city, with the block of pupils attacking the riot police with oranges and rocks.

In Chania, Crete, extended clashes between protesters and riot police broke out in the centre of the city with protesters smashing banks and erecting barricades.

In Irakleio, Crete, clashes broke out between riot police forces and protesters outside the courts of the city where the arrested of yesterday's march were interrogated. The protesters attacked and damaged several police cars and a riot police van, while pupils attacked the back side of the courts themselves. At evening another march took to the streets of the city but was quickly attacked by riot police forces which managed to disperse it with use of force and tear gas.

In Rhodes, clashes broke out between riot police and protesters after the former tried to arrest an pupil attacking a bank. During the clashes one more person was arrested. As a result the protesters have occupied university premises demanding their immediate release.

In Tripoli clashes developed between pupils and riot policemen when the latter blocked the way of the pupil's march.

In the city of Kozani protesters have occupied the city hall denouncing police brutality.

Protest marches also took place in many other towns like Naousa, on Paros island, Zakynthos, Volos and Katerini.

On the legal front, 10 people arrested on Saturday have been released from custody. During the hearing process 13-14 year old pupils from a nearby school marched to the courts erecting barricades on the streets blocking the traffic to and from the central courthouse of Athens.

Regarding the comrades of Resalto and the occupation of the Keratsini city hall, at 13:00 a demo was formed outside the courts of Peiraeus in expectation of the 21 arrested of Resalto, the anarchist social centre raided on Saturday. During the demo a local pupil's protest march joined the protesters piling the riot police guarding the courts with oranges. Meanwhile the city hall and local council of Keratsini published an announcement condemning the arrests of the occupiers of the city hall, and demanding their immediate release. According to the announcement there have been no damages done to the premises during the occupation to allow a police intervention. At 14:45 the interrogating authorities waved the anti-terrorist charges against the 21 arrested of Resalto, deciding they should be tried only for possession and of explosive substances (kerosene heating oil). At 19:00 the 41 arrested occupiers of the Keratsini city hall were released amongst high fists and solidarity slogans of protesters outside the court. They will be tried only for non-criminal offences tommow. The 21 of Resalto are still being interrogated at the time of writing.

Protest marches against police brutality in the last few days have been called for tomorrow in both Salonica and Athens.

Good, interesting reports as usual, taxikipali. Have you any idea what the dockers and shipyard workers are doing? Just a few weeks back, mid-October, you reported major clashes with the State by them. Any attempts to connect with them (or by them to connect with the movement in the streets)?

And the question on everyone's lips after reading your report is: Does this mean that the Greek cops can now arrest people in possession of a dangerous orange?

There has been no labour aspect of the last days' riots, apart from the street-cleaners and garbage collectors of Athens who refuse to stop their strike despite it being declared illegal for the three days of emergency for endangering state security. The strikers deserve everyone's proletarian salute for that! As far as cops arresting people for oranges, no, but they are morel likely to detain you with the slightest excuse. An arrest is a far harder thing to come about.

Update: All 22 people arrested in Resalto have been released under various monetary and liberty conditions. The minister of public order vented his fury at the local council of Keratsini for supporting Resalto publicly as a cultural and political space, and for denouncing the raid on it as political repression. The resolution of the local council can be read at http://www.occupiedlondon.org/blog/2009/12/08/152-resolution-of-the-municipal-council-of-keratsini-regargind-the-incidents-in-resalto/

According to the latest estimates since Saturday morning across the country 855 have been detained and 177 arrested. The Team of Legal Assistance has denounced the detentions as "preventive arrests" and thus as a anticonstitutional measure bringing to life methods of the junta.

At the time of writing more pupils protest marches have taken place in Athens. In Athinon Avenue pupils attacked the police, resulting to three arrests. Tension is currently building up in Koridallos where according to the latest reports pupils marching to the main prisons of the country have been attacked by riot cops.

These people are an inspiration to us all, brave and couragous if only more people were like this.....

do you have any idea on why there is such a level of high school kids involvemenet?

Wasn't Alex a student himself?

There has been an involvement of school pupils (13-17 year old) in radical politics for some decades now, first after the assassination of Michalis Kaltexas by the cop Melistas in 1985, and then more massively in the winter of 1990-1991 with the combeined pardonning of Melistas and a reactionary educational reform (Kontogiannopoulos' law) that was scarped after a whole year of high-school occupations marches and riots that flared up after government thugs killed a communist teacher, Temboneras, in Patras. During the 1990s school children's participation peaked again during another educational reform (Arsenis law) in 1998 with again almost a year-long occupation of schools. The recent involvement of pupils however is qualitatively different from past ones in that it is completely independent of left wing party influences, reformist demands or pacifist/ non-violent ethics. This has been seen as a result of the point-blank assassination of 15 year old Alexis Grigoropoulos, but also marks a general radicalisation of social antagonism in the country.

that is sooo true gabs!

According to people who went to the Arsenal match in Athens last night, there is a big strike of refuse workersgoing on. 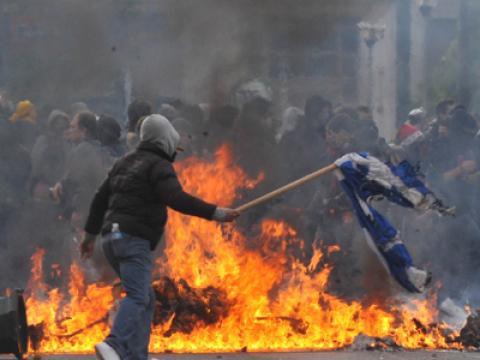 Riots have broken out in Athens and Salonica during the first day of A. Grigoropoulos murder… 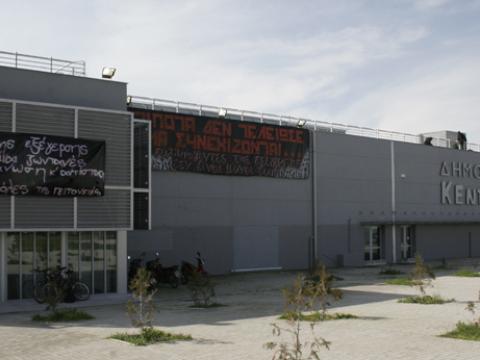 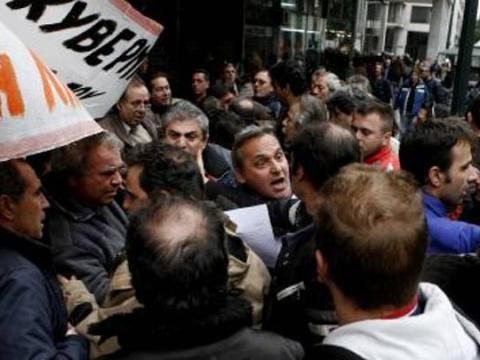