Subversion reviews of "A Ballad Against Work" and "Reflections on Marx's Critique of Political Economy".

A BALLAD AGAINST WORK (62 pages) [on Libcom here]

Both published in 1997 and available free from Collectivities c/o Majdoor Library, Autopin Jhuggi, N.I.T., Faridabad 121001, India, or on the internet at http://www.geocities.com/CapitolHill/Lobby/2379.

We have no hesitation in recommending ' A Ballad Against Work' as a well written, easy to read expose of the realities of life for us wage slaves whether living in Europe or India, a reality hidden behind the ideologies and mystification daily pumped out by governments, media, trade unions, and religious authorities everywhere. The pamphlet explains the real life extension of the working day/year for millions of workers despite the official reduction of working hours proclaimed by legislation and trade union agreements. On top of this most workers have suffered a major intensification of work. These two aspects of wage labour have had appalling results for our physical and mental well-being that are amply illustrated in the pamphlet with facts, figures and individual examples. Management strategies (by business, the state and trade unions) to screw us in various ways are explained and illustrated along with some interesting and occasionally novel ways in which groups of workers have sought to fight back.

This pamphlet is an invaluable addition to all revolutionaries' agitation and educational armoury.

'Reflections on Marx's Critique of Political Economy' explains a number of basic and still valid Marxist propositions. Despite assurances to the contrary I think some prior understanding of Marx's economic analysis IS necessary for the reader to properly evaluate the author's criticism of the historical limitations of Marx's analysis and the faults in subsequent Marxist and Marxist-Leninist analysis. Clearly there are both contradictions and historical limitations in the works of Marx but as the very publication of this pamphlet in 1997 shows there is no better starting point for understanding the functioning of the capitalist economy.

The author is critical of Marx's concentration of his economic analysis on capitalism in its pure abstracted state rather than as it exists in the real world in relation to pre-capitalist economies. Personally I always thought that, correctly interpreted, this approach strengthened the opposition of genuine revolutionaries to capitalism as such and not just to capitalism in its various backward or undeveloped forms. It is nonetheless true that Marx's comments on some of the particular historic forms of capitalist ownership in his time and his thoughts on where the changes he observed might lead can provide, and were certainly used by some to provide, a Marxist justification for subsequent leftist support for state capitalism. There is equally much else in what both Marx and Engels wrote to support opposition to all forms of state capitalism.

The historical and continuing role of the state in the economy is well explained and the author does a good demolition job on the economic absurdities underpinning leftist theories of monopoly capitalism and imperialism.

The author rightly stresses the historical distinctiveness of mercantile and usurers "capital" and the continuing importance of simple commodity production to modern capitalism. Whether or not capitalism could in practice exist purely on its own basis without substantial areas of non-capitalist and simple commodity production I`m not sure. It is certainly true that purely capitalist relations are continuing to expand both socially and geographically, producing major problems in the process.

Despite some minor reservations I think this pamphlet is worth reading.

Lastly I would like to comment on an issue only briefly alluded to in 'A Ballad Against Work', but developed more in correspondence with the author. In the 'Ballad' the author states:

The author reinforces this view in correspondence as follows:

"What is known and propagated as struggles of wage-workers are unified, centralised, unifocal struggles on the basis of factory, branch or region around a charter of demands. We have participated in some of these kinds of struggles and are acquainted with many covering a period of twenty years. We have come to realise that these are pre-meditated traps laid down by managements, unions and state apparatuses to implement policies of work-intensification, retrenchment, wage-cut and degrading working conditions. These struggles are in fact struggles of managements, unions and state-apparatuses against wage-workers because:

control of wage-workers through representation and delegation is ensured

imposing of the deceptive power of the negotiating table

insulation and isolation from wage-workers of other factories, branches and regions ensured and

dispersion of wage-workers is facilitated."

The author goes on to illustrate the above with a number of convincing examples from India and tentatively suggests that the long running Liverpool dockers dispute also illustrates the same points. I could also add some examples of my own from the European experience but this still leaves some unresolved problems.

The author is right in what he says about the typical traditional demand-led strike of the unions and also right to emphasise the importance of many small, and not so small, everyday struggles of workers that take place outside and often against the unions, in undermining capitalist authority. It must certainly be part of the work of revolutionary groups to report, discuss and popularise such activities.

I think in the above process the author has perhaps "thrown the baby out with the bathwater". If our class is to move from resistance to capitalist attacks towards the overthrow of capitalism then at some stage we must move to more open, direct, large scale co-ordinated actions. Strikes and occupations involving the imposition of class needs must surely be part of this process? In practice workers' own "demands" as opposed to those of the unions and political parties are likely to arise in the early stages of such actions. A move from the psychology of "demands" to a psychology of direct imposition of needs seems unlikely to take place in one fell swoop. In this process there are certainly some serious dangers of representation and hierarchy emerging but they cannot be avoided by simply refusing to countenance open organisation and confrontation with the system.

Even in the immediate situation I do not think it is beyond the ingenuity of workers, starting from an official strike or a lockout to extend and subvert the purposes and control of the union bosses and employers. There are numerous cases, including the Liverpool dockers dispute, where this has happened in at least a small way. The Liverpool dockers are aware that they were manoeuvred into a dispute and then a lockout by the employers. How they might have responded better than they did has been the subject of much discussion. An immediate occupation right at the start was actually proposed by some and would certainly have created an early impact though as we all know there are other potential problems with this tactic. Possibly they could have crossed the initial picket line and engaged in other forms of passive resistance and sabotage but who is to say that a lockout could still not have been imposed later? It is a complex situation and at the end of the day victory depends on wider support and hitting the employers where it hurts i.e. in their pockets. 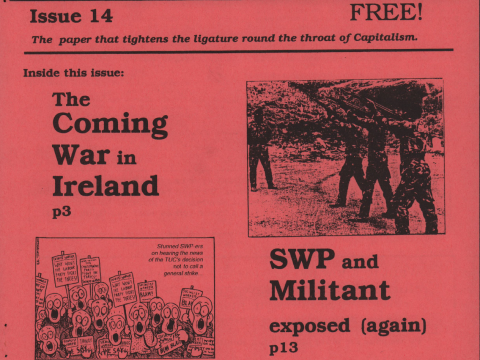 Issue of Subversion from 1994 with articles about the war in Ireland, SWP and militant, trade unionism, the media and more. Article of Subversion from early 1991 with articles about the Gulf War, a strike in Turkey, the troubles in Northern Ireland and the poll tax and the official left groups.

Reports from Indian textile workers about their conditions, from autumn 2009.