A brief introduction to Pannekoek’s book on Lenin that defines the council communist tendency of Marxism as the long awaited bridge between Marxism and anarchism that promises to heal the rift of the Bakunin-Marx split in the First International. Written in the form of short “theses”, the text begins with a critical assessment of Trotsky’s opposition to Stalinism, supports Luxemburg’s and Mattick’s anti-Leninist critiques with regard to spontaneity and ends by agreeing with Karl Korsch’s negative identification of Leninism with social democracy as both being opposed to emancipatory socialism.

A few years before falling victim to an assassin’s blade, Trotsky placed the stamp of his opinion on Marxist literature in the following terms:

“In present day conditions the Marxist label would predispose us to mistrust rather than to acceptance. In close connection with the degeneration of the Soviet State, Marxism has in the past fifteen years passed through an unprecedented period of decline and debasement. From an instrument of analysis and criticism, it has been turned into an instrument of cheap apologetics. Instead of analyzing facts, it occupies itself with selecting sophisms in the interests of exalted clients.” (1)

This evaluation, which refers to the political parties linked to the development of what was once considered, rightly or wrongly, the “Rome of the proletariat”, is undoubtedly one sided and incomplete. One sided, because it remains blind to the rebirth of Marxism among the groups and ideological currents that emerged and carried on the struggle outside of the Soviet State and offered a powerful challenge to its self-interested propagandists. Incomplete, because it traces the degenerative process only back to the consolidation of the power of the Stalinist bureaucracy. But to make the decline of Marxism into a contemporary event on the basis of an artificially isolated stage of development that culminates in that same process of decline, is not indicative of either objective impartiality or the ability to use Marxism as an instrument of analysis and critique, a defect which Trotsky so often attributes to his opponents. For the present, however, we shall pass over as of little interest the subjective causes that so constrained the critical horizon and the independent judgment of the great revolutionary and historian of the Russian Revolution.

In its ideological dimension, the development of the Russian phenomenon originated in two closely related problems pertaining to the practice of the social struggle: first, that of the “conveyor belt” of the workers movement, which involves the theory of the necessity of the vanguard party; and second, that of intellectual-consciousness as opposed to spontaneous consciousness. The first is the corollary of the second, and both were addressed in the debates that pitted Lenin against Rosa Luxemburg during the course of a memorable polemic. Needless to say, events have vindicated Luxemburg and … Trotsky, who sided with Luxemburg against Lenin in his contributions to that debate.

The relation between the theory of intellectual-consciousness and the theory of the ultra-centralized revolutionary vanguard party, as these ideas are expressed in Lenin’s What Is To Be Done? and One Step Forward, were subjected to a thoroughly objective analysis by Sprenger in his Sociology of Bolshevism, several chapters of which we recently translated (2). Based on Sprenger’s analysis and the analyses carried out by others the following conclusions become evident:

The theory of intellectual-consciousness is contradictory. On the one hand, Lenin supports the mechanical concept of materialism which sees consciousness as nothing but the reflection of the external world, and this causes him to underestimate the role played by spontaneity in history; on the other hand, in his concept of socialist consciousness, the latter is not identified with the proletariat, but with the importation from outside the proletariat of the ideology of a bourgeois intellectual “elite”, whose mission is precisely to conduct propaganda for socialism among the working class. The historical experience and struggles of the class count for nothing in the Leninist schema, and the mission of the proletariat is to allow itself to be penetrated by this propaganda and to serve as an instrument of a political bureau, the only authority capable of pointing out the methods and goals of the struggle.

The theory of intellectual-consciousness is therefore fundamentally idealist, and its corollary, the political party, the vanguard composed of professional revolutionaries, subject to strict discipline, obedient to a centralized leadership, is ideologically, and by virtue of its methods of action, related to Jacobinism. With such a background it is not at all surprising that Lenin’s party in power behaved like the Russian version of a Jacobin dictatorship.

The theory of spontaneous consciousness, on the other hand, is materialist. Its ideological roots were already present in Marx; it was further developed by Rosa Luxemburg; and its mature expression is found in the work of Paul Mattick (3). It expresses the spontaneous element in the working class movement, in its creations and its methods of struggle. It is the reflection of the consciousness of the most intelligent fighters who are not willing to submit to the ecclesiastical mediation of the party; it is the consciousness of the movement that materialized in the soviets and the workers councils. The development of this theory, enriched by the experiences of social struggles over the past thirty years, leads to original conclusions in its immediate applications and with respect to its meditations upon the future, the organization of the communist society.

With regard to the first point, the “council communists” proclaim their opposition to the State, to parliamentarism and to all mass organizations such as political parties and centralized trade unions, which they consider to be nothing but the seeds of future hierarchical and authoritarian deviations, the incubators of privilege and totalitarian dictatorships. The basic unit is the “factory council”, a western version of the soviet, which first appeared in Germany but was quickly suppressed by the converging forces of the socialist-military reaction and the Third International under Lenin.

As for the second point, with regard to the question of how to organize production and distribution as a whole without resorting to a central power, without a State, the solution offered by the council communists is ingenious and, theoretically, unobjectionable. The proposal to operate on the basis of average social labor time as the accounting unit for determining individual participation in consumption satisfies the egalitarian requirements of an era transitional to an economy of abundance, with a minimum of statistical labor and without the reestablishment of a camouflaged monetary system. (4) The formula that condenses the distributive criterion presents a structure that implicitly recognizes the reality of the social organism. In this way it serves to constrain those tendencies towards an extreme individualism as expressed in slogans like, “the mines to the miners”, “the land to the peasants”, and others of this sort, which could provide a new impetus to the old habits of ownership and thus pose a grave danger for the very existence of the communist principle. But this barrier in no way restricts the initiative and autonomy of the diverse units of production.

It is understood that an organization of society without compulsory political mechanisms, without the coercive action of the State, one that is composed of relatively small units, the councils, enjoying a great deal of autonomy, must in practice exhibit centrifugal tendencies, at least during a transitional stage of development, which could create difficulties for the execution of a concerted plan when this is required by large-scale and long-term projects. These tendencies cannot be fought by mechanical or external means. The renunciation of such means is the price of freedom within a system based on equality. But this imposes the urgent requirement to reinforce the spiritual bonds that link the members of the community of the producers. Hence the importance of a coherent philosophy that awakens the same intimate belief in the will of all persons associated in the labor of creation. And this philosophy must contemplate rules of mutual coexistence, an ethic of free producers, capable of instilling in men’s consciousness respect for all ideas, and with regard to conduct, the practice of carrying on controversies at a high social level. Here it is appropriate to quote Dietzgen:

“The individual man finds himself lacking, inadequate, limited in many ways. He requires for his complement other people, society, and must therefore live and let live. The mutual concessions which arise out of these relative needs are called morality.” (5)

We have sketched out in very broad strokes the fundamental ideas of council communism. Enumerating its outstanding concepts, proceeding from the general to the specific, we find them in the following order: materialism (philosophy); spontaneity (theory of social consciousness); communism (economic theory of production); workers councils (theory of social struggle). In their propaganda, of course, the council communists proceed in the opposite order, from the particular and the concrete to the general and abstract, and thus follow a healthy method of social communion, as well as in recognition of the fact that in the final accounting one must start from the facts of immediate reality, from the elemental struggle for our daily bread, for more human living conditions and for individual liberties, which are today in such a precarious condition, so as to reach a comprehensive and harmonious view of the world, which is the definitive emancipatory tool.

It can now be understood why council communism has encountered such a sympathetic response in anarchist sectors. Its opposition to the State and parliamentarism; its rejection of all class collaboration and the repudiation of political parties; its critical stance against hierarchical mass organizations; all these points inevitably had to lead towards a mutual convergence. It was a regenerated Marxism that knew how to extract from Marx everything that the political passions and blindness of the authoritarian political parties, whether reformist or Jacobin, had overlooked and failed to utilize. Furthermore, we now see how a similar development has taken place in anarchism, after many years of ideological stagnation, and we are today witnessing the spectacle of a sincere desire to establish links that auger an immanent synthesis and the definitive reconciliation of the two tendencies of the First International that together manifest all the struggles and hopes of the working class and humanity. (6)

As a result, we must modify the critical judgment offered by Trotsky that we quoted above, with this other evaluation made by Karl Korsch:

“A fundamental debate on the general state of modern Marxism has now begun, and there are many indications that despite secondary, transient or trivial conflicts, the real division on all major and decisive questions is between the old Marxist orthodoxy of Kautsky allied to the new Russian or ‘Leninist’ orthodoxy on the one side, and all critical and progressive theoretical tendencies in the proletarian movement today on the other side.” (7)

Originally published as the introduction to the 1948 Spanish language edition of Anton Pannekoek’s Lenin as Philosopher, translated by Laín Díez and published in Santiago, Chile in 1948 by the Centro de Estudios Materialistas.

Translated from the Spanish text available at:
http://www.fondation-besnard.org/article.php3?id_article=534

2. Rudolf Sprenger, Bolshevism, New York, 1939. (“Rudolf Sprenger” was a pseudonym of Helmut Wagner, a member of the council communist circle associated with Paul Mattick during the 1930s and a frequent contributor to International Council Correspondence and Living Marxism [translator’s note]). 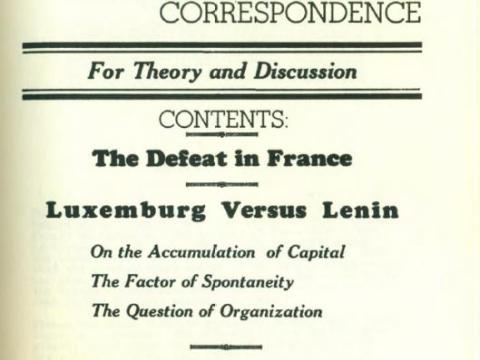 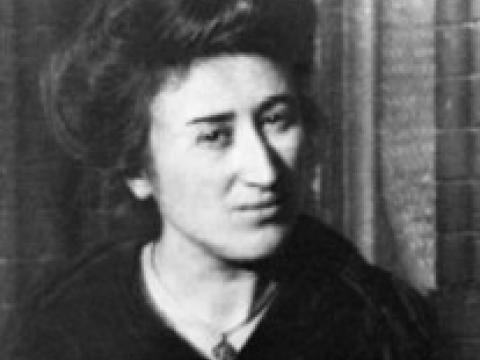 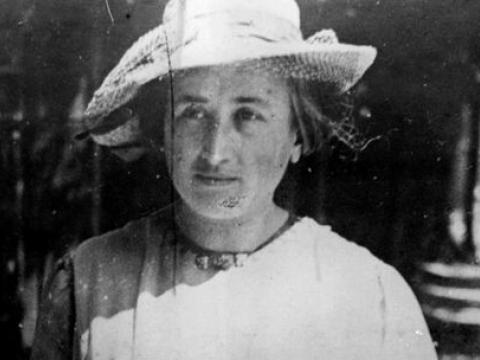 Mattick reconsiders the legacy of Rosa Luxemburg, particularly her critique of Bolshevism and her economic theory.
Image 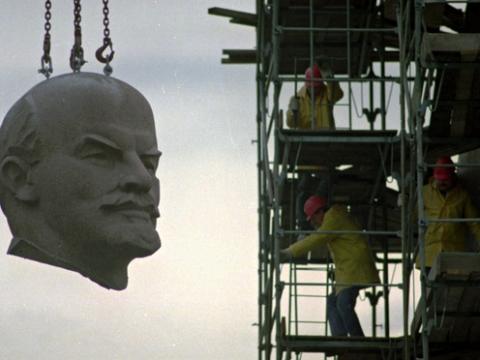 A documentary history of communism in Russia - Robert V. Daniels