In a time that's seeing strikes at cinemas across London, Curzon has so far not yet been affected. Indeed, the chain is expanding: opening up a new sites in London and Oxford. Last February, Curzon CEO Phillip Knatchbull was recognized by the BAFTA for supposed Outstanding British Contribution to Cinema. But all this success has come at staff's expense. Below, a group of Curzon workers detail their struggle to retain paid breaks.

We are a group of Curzon employees, some of whom campaigned for union recognition in 2013 and are now recognised under the BECTU union. Back in 2014, we campaigned for the Living Wage and reached an agreement with Curzon, making Curzon the first commercial cinema chain in the UK to pay the living wage.

In March 2017, without any official notice, our paid breaks were cut. This was done by the new Commercial Director, Alex Sheldon . The living wage deal was signed off by Curzon and BECTU with the agreement that the union workers who signed on to the living wage deal in Oct 2014 would still get paid for their breaks, whereas anyone who joined Curzon after Oct 2014 would not.

This was not communicated to any new employees who joined Curzon after October 2014 and due to the complicated new payroll system they had installed at the time, new employees were still paid for their breaks until the cut was introduced in March. We were informed verbally in a hushed manner and were given less than one week's notice to accept the cut. Some of us have lost £70 - 150 a month. That's more than a £1000 a year.

Since April 2017, we've been negotiating to get our paid breaks. The company seemingly did the 'right thing' in recognising the union and paying the living wage. But now we find ourselves in an all-too-familiar situation, in which there is an ongoing debate about paid breaks with no solution in sight. There are now two tiers of employees; those who get paid breaks and those who do not. But we all do the same job. Curzon's aim is to get rid of the ones with paid breaks. Our responsibilities as general staff are doubling: our job description stretched, hours and shifts have been massively cut.

Getting the living wage has not made any of us rich. In fact, with the paid breaks, and if we managed to get enough shifts, we were just about getting by. Every day is a battle working in the cinema, due to the staffing budget being massively cut to finance the opening of new cinemas, first in Aldgate, and now in Oxford.

We are constantly short-staffed and short of hours and shifts with no other option to make ends meet. The minute we start voicing concerns about welfare, we are shut down with no response or solution. There is barely any official communication.

Unfortunately, with regards to such issues, it is difficult for BECTU to get involved as it's not part of the union recognition agreement. BECTU is only allowed to act on behalf of us for things like pay, holiday and redundancy. We are all exhausted and broke and as such it is difficult to put a case together to show Curzon that their pattern of operation for the cinemas is flawed.

Back in the day, before the huge changeover happened, cinemas were left in the hands of the managers and staff to run: marketing, budgets, programming and events. Those were the days when we had all sorts of cinema-goers, ranging from students to old age pensioners to film-makers, rather than Coutts Card holders buying fancy wine and popcorn. It was buzzing with great energy and each cinema had its own personality and a niche of customers and films.

It's now all changed and everything has been gentrified and designed more for an audience of suit-wearers. Back then, we had very good relationship with Curzon Head Office, but after the change over and several Operations Directors later, they stopped listening to us and made cuts and changes without any input from their workers.

Legally, Curzon have the right not to pay breaks as it is stated in the contract but the way management have dealt with this is appalling and disrespectful. Philip Knatchbull appeared in the pages of the Evening Standard boasting about his plans to expand distribution and open cinemas around Europe, possibly selling Curzon to bigger cats like Netflix so he can stuff more profit in the pockets of his grey jeans and open-neck shirt.

One of the most vivid examples of the total disregard to our welfare is the fact that they didn't to build a staff room when they renovated Curzon Renoir (now Curzon Bloomsbury) a few years ago, despite requests from the staff to do so.

Moreover, earlier this year, when they opened Curzon Aldgate, lo and behold, once again they forgot to build a staff room. It makes you wonder: do they really give a sh*t about their workers? How do they expect their employees to respect them? How do they expect staff to extend their support to the SAVE Curzon Soho petition from the Cross Rail 2?

We can't help but wonder if there will be a staff room at Oxford...

The Curzon executives either don’t understand what the Living Wage means or they don't care. They have moved away from the real concept of the Living Wage and are using the pay rise as an weapon to attack everything from staff performance, hours and pay budget, management style to job descriptions and appraisals. They disregard the fact that the reason we need Living Wage is because we need that basic amount of money to survive and work in the UK.

By removing paid breaks, we technically don't get the living wage. And this is quite frustrating because the law allows it - 'The break doesn’t have to be paid - it depends on their employment contract'. For many years, Curzon and many employers have been taking advantage of this.

Curzon claims they can't afford paid breaks because of issues with paying back investors. But our paid breaks shouldn't be sacrificed to make up for the bad investment decisions of management. People who invest already have a steady income and they are just investing money to get more money. But people like us can barely can afford rent and living costs, let alone save.

We are told that we are ungrateful for demanding paid breaks. Having to fight for your rights by joining a union is a difficult and brave thing to do and takes a lot of effort, courage and organising. We've experienced the struggle to get the London Living Wage and we understand that if we don't fight to defend it, we'll lose it.

Boris Johnson once said that tube workers already get a sweet deal in their contracts. Their union, the RMT, came back with this - they got the sweet deal because they are in the union and it took them a lot of effort and time to get that far. So to say that it is a sweet deal is to totally undermine of all the blood, sweat, and tears that workers poured into achieve those contracts. Well, we'd like to play to the same tune as the RMT: we've come this far to get the London Living Wage and we won't give up until we get our paid breaks.

To all Curzon cinema workers, please join the fight by joining the union, BECTU.

Then call or email Philip Knatchbull, Alex Sheldon and Emma Murphy and let them know you support Curzon workers in their demand to retain paid breaks.

We are unable to talk to our supporters in person about this as we need to be wary of what we say so we are not penalised by management.

Anyone who can help us on a bigger scale, please get in touch with BECTU and ask for the official in charge of the Curzon employees.

Curzon either doesn't understand what the Living Wage means or they don't care. They have moved away from the real concept of the Living Wage and are using the pay rise as an weapon to attack everything from staff performance, hours and pay, management style to job descriptions and appraisals. 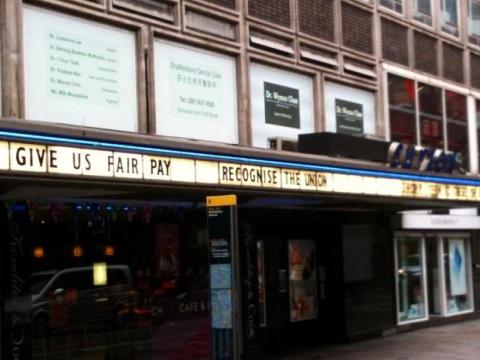 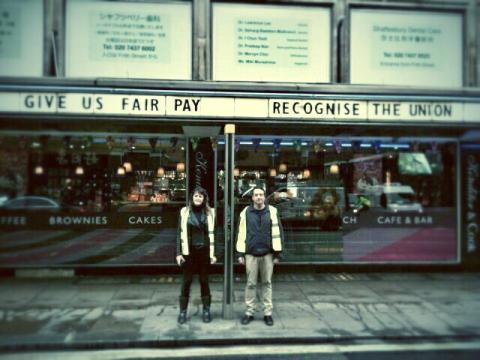 Behind the screens: an interview with two Curzon cinema workers 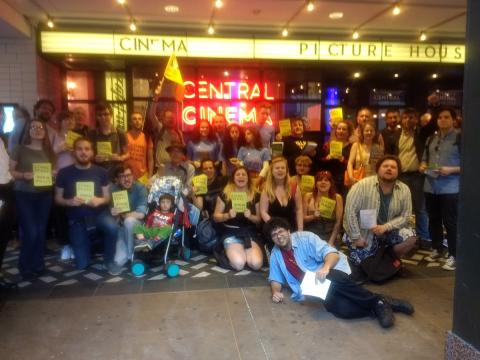