Police outside Senate House, the inspiration for Orwell's Ministry of Truth

Sussex
University management have singled out five students for their involvement in the anti-privatisation campaign, and a recent occupation in support of striking staff. The students have been suspended from their courses and excluded from campus. The reason given includes an alleged "threat to the safety and well-being of students". Sussex managers have repeatedly called in riot police to attack student protests on the campus. Under the University of Sussex regulations, the Vice Chancellor is granted arbitrary powers of suspension. Regulation 7(3)(e) states:

The same power was used in 2010 to suspend the 'Sussex Six', who were reinstated following a week-long occupation in defiance of a High Court injunction. The University of Sussex Students Union and the anti-privatisation campaign were quick to condemn the suspensions. The campaign statement stressed:

A petition to reinstate the five had exceeded 2,000 signatures within 12 hours. There will be a mass demonstration at 1pm Thursday in Library Square against the suspensions, and in solidarity with the occupations elsewhere which have come under attack.

University of London
Meanwhile in London, an occupation of Senate House, University of London, was broken up by the Metropolitan Police's Territorial Support Group after only a few hours. No injunction or eviction order was granted and no warning was given. Witnesses say police simply stormed into the building, alongside university security, attacking occupiers and bystanders alike.

Never really seen anything like it; no nightsticks, no warnings, just swoop from nowhere then punching and chasing gathered crowd #occupysh— Huw Lemmey (@spitzenprodukte) December 4, 2013

Confused bystanders and spectators ran for the gates, coppers chased them, pushed them to the ground #occupysh— Huw Lemmey (@spitzenprodukte) December 4, 2013

All happened so fast hard to tell if the violence was planned or cops out of control, but scale of op was stunning #occupysh— Huw Lemmey (@spitzenprodukte) December 4, 2013

There were at least three arrests made in the confusion.

The police violence has been reported in the Guardian. The Senate House occupiers had issued ten demands, incorporating the three of the 3 Cosas Campaign, which has just won major concessions after a strong two-day strike by the IWGB union. The University of London Union, ULU, which is being shut down by university management, issued a statement on the police raid:

We are still investigating what happened inside, but initial reports indicate that protesters were assaulted by both police and security: thrown to the ground, kicked and punched, and dragged to the ground by their hair.

The raid is expected to swell the 'Cops off Campus' demonstration which had already been organised for 3pm Thursday in response to previous police aggression during the 3 cosas campaign.

I understand the Sheffield occupation was also injuncted on strike day, with terms banning protest anywhere on campus.

I can't help noticing this escalating intolerance for long-established forms of dissent corresponds to students linking up with workers (the Pop-Up and strike-day blockades at Sussex, 3 Cosas at UoL). Remembering back to the Nov 9 2011 student demo, when 'total policing' (overwhelming numbers and a 'wanderkessel') were used to prevent students joining up with Sparks, and this seems to be something bosses and the cops don't want to happen.

The email also claims that the suspension is related to “criminal charges…pending or where the student is the subject of police investigation”.

Which means either the university has knowledge of ongoing police investigations prior to any arrests being made, an unnerving level of collaboration, or they're lying, again.

Slight correction on the (Sussex) university regulations from someone on Facebook:

I thought I might briefly clarify the background of the university regulation in question. While 7.3 (e) provides in pertinent part that

The arbitrariness extends to admissions, NOT to suspensions. The actual *power* is enumerated in a section of Annex 1 titled as such.
Here's the bit from Annex 1:

Power:
The Vice-Chancellor may suspend and/or exclude a student *who is the subject of a criminal or disciplinary investigation arising from an allegation that he or she has
committed a serious offence.* Serious offences include, but are not limited to:

The logic applied here seems to be utterly circular: the 'disciplinary investigation' seems to simply be the vice chancellor's desire to suspend some students and strike fear into our hearts. My understanding is that 3.3 was mentioned, but it's not clear which part of the health and safety guidelines are being violated.

In Liverpool, uni management have fenced off the occupation with scaffolding:

Uni of Liverpool occupiers decided that it wasn't tenable to continue while kettled in, especially as management were trying to lock them in one lecture theatre with no access to toilets or running water. Management have been pretty heavy handed, though no direct intervention from cops as far as I'm aware.

This is the first time there's been anything resembling a successful occupation at any Liverpool university in years, so hopefully something we can build on. The fight against outsourcing and zero hour contracts at UoL is looking interesting too, it's early days yet, but there's a real will to fight and organise amongst a lot of the staff.

Wow that was just incredibly violent. 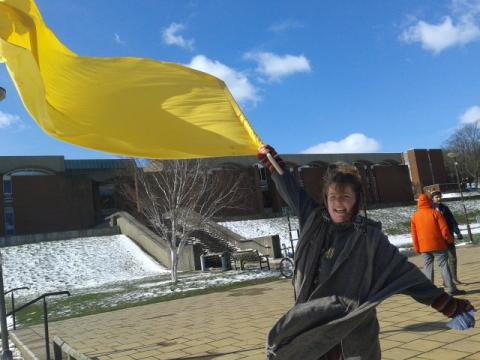 A collection of short articles discussing the dangers of co-optation, and the possibilities for escalation, in the student occupation at the…
Image