This article by S'bu Zikode appeared in Durban's elite bourgeois newspaper, the Mercury, in July 2006. After Abahlali baseMjondolo put twenty thousand people on the streets in support of a boycott of the February 2006 local government elections in the face of major militarised state intimidation the middle classes began to concede some space to the voices of the militant poor. Naturally the local white/Trotskyist/American linked NGO quickly usurped the platform for themselves in the name of the movements of the poor but the point was made.

We are the restless majority
Why is so little being spent at grassroots level where most of our people live and suffer? asks S'bu Zikode

Many policies have been passed. Many people have voted. But what has been done has been done for the rich. I am afraid the government, other organisations and academics speak about the poor all the time but so few want to speak to the poor.

It becomes clear that our job is just to vote and then watch the rich speak about us as we get poorer.

We have seen that when the plantations of the rich are on fire there are often helicopters with tons of water to extinguish the fires. But when our shacks are on fire helicopters and ambulances are nowhere to be found.

When Mhlengi Khumalo, a one-year-old boy, died in a fire in Kennedy Road, Clare Estate, last year, Durban Electricity was not on the scene. Helicopters only come for us when we want to march. The state comes for us when we try to say what we think. We must understand this lesson very well. We are on our own. We have no choice but to fight.

I become ever more afraid when I see that so much money is being spent at high levels - on conference centres, hotels, stadiums - and that so little is being spent at the grassroots level where most of our people live and suffer.

Communities have had enough death. It is clear that Aids breeds poverty and poverty breeds Aids. Both must be fought if we are not to be afraid in the future. This is not about making small changes to policies. This is a class struggle. This is a struggle between the "haves" and "don't haves". Our society can only be saved if the don't haves win this struggle.

Brave
More and more thousands of us are becoming brave enough to fight this struggle now. For the first time in this country's history the poorest of the poor are saying: "This is who we are. This is how we live. This is what we think. This is how we want things to be done . . ."

The Abahlali baseMjondolo movement is a home for those who know that the poor suffer, know that this country is rich, and know exactly what made and makes this country rich. Our movement seeks to bring policies that affect our people under the control of our people.

We believe that housing policies not only require housing specialists, rich consultants and government. Housing policies require, most importantly, input from the people who need the houses. But we also know, as poor communities and as shack dwellers, that the broader poor have no choice but to play a role in shaping and re-shaping this country into an anti-capitalist system.

Benefits
Giving reasonable budgets for development projects in district municipalities and rural areas will mean that people will no longer be forced to leave their homes and build shacks everywhere. If the shackdwellers belong to this country then they are entitled to all the benefits of the soil.

The alternative, the direction of our struggle, will come out of the thinking in our communities around many questions: What have we shackdwellers learned from our struggle so far? What can be learned from the South Durban community struggles against the Engen refinery; from the flat residents living in Bayview, Albert Park, Sydenham Heights and Phoenix?

Why are councillors "imposed" on us? What should we do about it? What have we learned from the deaths of shackdwellers like Monica Ngcobo, Tebogo Mkhonza, Komi Zulu and Mhlengi Khumalo? Why are our people being killed by the police, by fire, by councillors? Why does no one high up seem to care?

I am optimistic that the "will" of the poor will soon be done because the poor are the majority of this country and the majority is beginning to speak for itself. 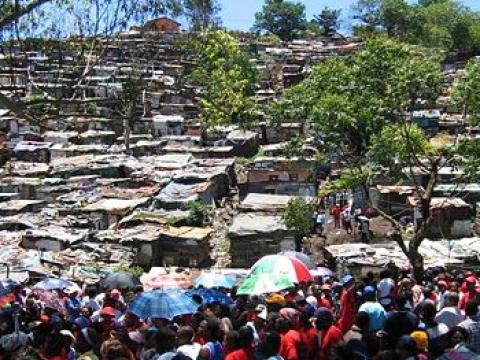 'Be a visitor, not a spy' - QQ Section, Site B, Khayelitsha

Matt Birkinshaw, a London anarchist, gives an account of his visit to the QQ shack settlement in Cape Town in diary form. QQ has recently joined the Abahlali baseMjondolo movement that began in Durban but now has a national presence.