UK and US coverage of French revolt "reserved" says Liberation

From the New York Times to the London Times, Fridays Anglo-Saxon press is very reserved in its coverage of the anti-CPE revolt in the streets of Paris and elsewhere.

Students, CRS, banners and rioting - all the stereotypes of the French demonstration are expressed. "The French in the street, but its not 68" says the headline of New York Times. The article explains why, some 38 years after the revolutionary spring of May 68, the young people of 2006 are no longer soft idealists dreaming to change the world.

"The objective of the students this time is much more modest", writes their correspondent in France. And it quotes a trade-union official from UNEF (student union): "Our revolt is not to obtain more. But to keep what we have."

The Financial Times adopts a more political angle and sees concern for Domenique de Villepin. "the assertion of Mr. de Villepin, who insists that that the CPE will be helpful, is crushed more and more by an increasing opposition of the young unemployed of the poor suburbs" note the journalists of the FT.

"Interviewed this week by the Financial Times, the young disenchanted people of the Clichy-sous-bois suburb of Paris, are practically all opposed to the contract. Many stress that they will refuse to a job with the new contract" continues the paper.

"The French students return to the street" says the Times, with the photograph to support. The correspondent of the London daily newspaper in Paris lengthily analyzes the political awkwardnesses of the French Prime Minister. In his blog, Charles Bremner dares a parallel with the storming of the Bastille. The Guardian finds that the quarrel between students and trade unions dissatisfied on one side, and the government on the other, is of an importance such as to pose deep questions that go beyond the borders of France. "Because of its tendency to polarize and dramatize politics, France always had the capacity to show the rest of the world the really significant questions".

Translated for libcom.org by alibi
Source

Late afternoon on March 28th around fifty students penetrated the offices of Agence France Presse in the centre of Paris to protest against “disinformation”. 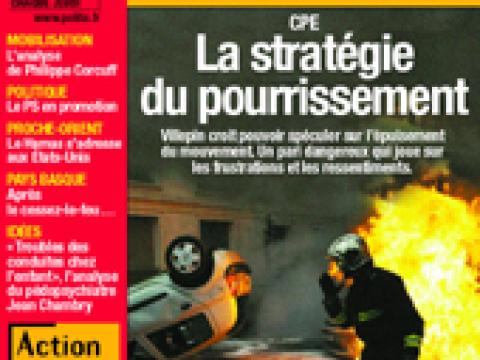 What the French press are saying about the protests

A review of the French press on the CPE prepared for libcom.org by our Marseille correspondent.