The strike at the banks lasted for 24 days, from the 7th until the 30th of June. The participation was not low, however the bank clerks who took part at the two rallies organized by OTOE (Federation of Bank Clerk Unions of Greece) - during the general strikes called by GSEE (General Confederation of Workers of Greece) on the 16th and 24th of June - were too few. On the other hand, the public sector’s employees’ participation in those GSEE strikes was also low, as it was the case with the dockers’ demos, although their participation in the strike reached 100 percent. The major weaknesses of the banks strike were as follows:

* No general assemblies took place; the struggle was organized by an unreliable union leadership that just three years ago had agreed with the bankers to a pension reform law.
* There were no pickets, especially on a workplace where bosses’ violence is high (this is the case particularly at private banks: Eurobank, Alpha Bank - at the latter there is a union set up by the bosses). The Initiative for a Common Action of Bank Workers and Pensioners against the Pension Reform in Athens was an exception. They managed to shut off some big bank branches downtown and turned scabs away - but that was all they were able to do.
* The leadership of OTOE called strikers to work, although they had agreed with the bankers for less bank clerks to work as security personnel. So, the cost of the strike for the bankers was not high.
* There was a certain reluctance to coordinate actions with other strikers, such as the dockers.
* There was a lack of imagination and propagandist activities on the strikers’ side about the consequences the new pensions law would have on the proletarians in general. By that we mean that the pensions reform of the bank clerks paves the way for a generalised attack on the pensions status. By placing the up to now independent but deficit supplementary bank insurance funds under the auspices of IKA (the main Social Security Foundation), the government is trying to make it bankrupt. Then “reconsidering” an all-out pension reform will appear as a “logical” step.

However, we should note that the battle is not over yet, as far as the banks are concerned. On the 12th and 13th of July the bank clerk union at the Bank of Attica called a 2-day strike that blocked temporarily the management resolution to make use of the new law and abolish the employees’ Pension Account.

The dockers’ strike coincided with the bank clerks’ strike. On the 5th of July, after a month’s strike, their case was brought to an arbitration court, to the relief of the union leadership: all the workers took part in the strike but they refused to take part in the mock demos organized by the leadership. It is a closed union not easily manipulated by political parties. Their point of reference is IDF (International Dockers Federation) rather than GSEE. They are all permanent workers. There has not been any new hiring since 1988 and the last temporary worker was hired in the beginning of the 70s!

Their high wages are due to a combination of reasons: it’s a closed shop where the union still has the exclusive right to negotiate over tariffs on merchandise loaded and unloaded at the port of Piraeus; the union is very well organised; if we consider that the only container relocation station in Greece is at the port of Piraeus, then we may understand their excellent negotiation position which has also allowed them to get paid for fictitious overtime work all these years. Besides, the surlplus value created at sea trade is very big and so are the ship owners’ profits, thus the dockers’ good negotiation position is very profitable, too.
The management effort to employ temp workers sparked off the strike, which was managed by a small team of unionists. There was no rank-and-file mobilization, no propaganda of their positions to the people of Piraeus, no leaflets. The union leadership had the only say. The strike had no effect whatsoever because the government aims at the devaluation of the port. In the years to come things will change as there is a restructuring process going on at big ports in Greece and a new container relocation station on the island of Gavdos is under plan.

In recent years a method undertaken by the neoliberal state officials (with ELTA -Greek Post Office- and Olympic Airways being the most recent examples) has become very usual: let state companies run with swollen debts and then, under the debt pressure, we will come to “restructure” them. Sometimes it works, sometimes it doesn’t, at least not immediately. In this concrete case, the OLP (Port of Piraeus Company) management and, by extension, the Ministry of Merchant Marine, didn’t hurry to stop the strike (which they could do, if they, i.e., had called the riot police, the public prosecutor, declaring quickly the strike to be illegal and undue) precisely to let the OLP deficits inflate. Then they could appear as the “saviours of the port”.

What we should take into consideration is why the government is giving battles on all fronts at the same time. Are they compelled to do that? Certainly, the competitiveness of the Greek economy is very low and they have to take emergency measures, even if they risk bringing different sections of the working class together against the same attack they are under, after having realized how common their interests are! The reactions of the DAKE members (Right Wing Union Organization) point to this possibility. They verbally condemn the measures, because “they will lead us to extreme social conditions”.
TPTG and friends 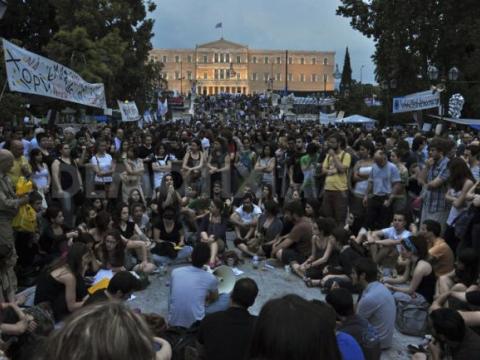 Bank workers are on strike for the second time in two months as part of the continuing campaign against pension reform. 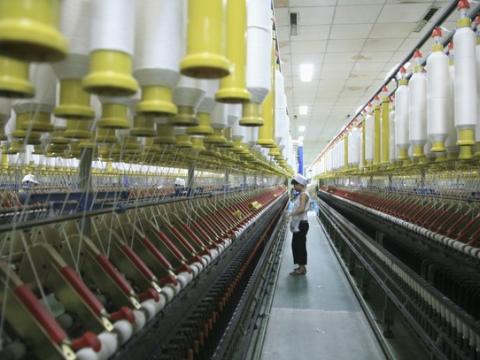 Developments and workers' struggles in the Greek textile industry, 2005

Article on the status of the Greek textile industry in 2005, with analysis of workers' struggles…