For those of you thinking about getting a job...part two

Second part of a discussion begun in Subversion # 21 about the type of work revolutionaries should do.
From Subversion #22 (1997)

Having had discussions with the rest of the SUBVERSION group it now seems that there is in fact little objection to my article of the previous issue. Certainly the claim of "disagreements of a serious nature" has been found to be illusory.

However, it does seem appropriate that I briefly examine the objections that were originally made to the article and that I elaborate some things which seem not to have been clear.

There was a lot of problem with this phrase amongst the group. Even though I explained in the original article that all I meant by this phrase was jobs where some level of class conflict seemed to be going on, where this struggle has the potential to further radicalise the workers involved. If people support the struggle of the productive, or toiling, class against the owning class then it makes sense that they get into situations where this struggle is a daily reality, for their own sanity if nothing else!

Obviously moving from one job to another will become more difficult as you get older, which is why I should really have said in the original article that this was an appeal to younger people (under 40 years or so perhaps). But moving jobs is not as difficult as some people make out, unless you don't want to lose the high "middle-class" wages, or comfy little job, that you can currently command!

It was suggested that I "underestimated" the personal and practical dificulties for revolutionaries in targetting certain jobs. However, just because something may be a little difficult that does not make it an invalid thing to do. This kind of objection smacks of guilt! Obviously it will be easier for younger people to make sure they mess up any chance they have of getting a good and "socially worthy" career before it is too late

It was also suggested that I "overestimated" the influence of what would (at this time) be fairly marginal shifts in the work locations of revolutionaries. However, a few revolutionaries in one particular industry can have a big effect, when, in the past, revolutionaries have started to become a presence in workplaces they have usually had an influence seemingly out of proportion to their numbers. In this respect it is useful to look at the influence "rank-and-file" groups (their dodgy union politics aside) have had in the past.

I think it would be good to encourage the building of a culture amongst radicals in which we took jobs for the potential to escalate the class struggle rather than taking jobs for the money or an easy life.

It was also suggested that I was arguing for the creation of some sort of "super militant" "professional elite" who sacrificed their own needs and desires to the need for "the organisation" to have influence. However, I'm not arguing that any "organisation" should seek to increase its influence in our class in this respect, only that individual revolutionaries should seek to increase their influence - it is only natural that revolutionaries will already be in contact with each other, what would be interesting would be when they start acting in a unified way at their workplaces. At present there is no "organisation of revolutionary workers" to speak of, this will only come about through joint activity and positive intervention in class struggles. As for sacrificing our own needs and desires, this turn of phrase makes it sound like our needs and desires are different to those we espouse in our publications, if our needs and desires are somehow "anti-working class" then we've gone badly wrong somewhere in our life!

The purpose of my article (and the interview with Volker in this issue) was to stir up some thought amongst our readers as to what type of work they are doing or might be considering to do. That's all. 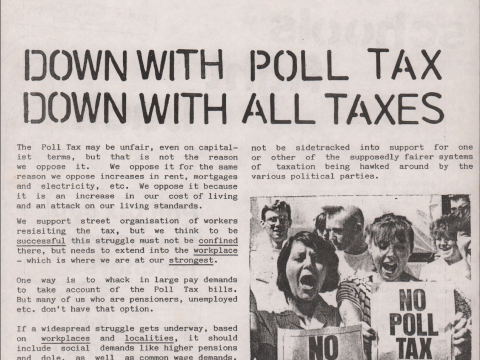 An unemployed member of Subversion critically responds to Employment service strikes. We do not agree with this article but reproduce it for reference.

3 strikes and a funeral: comments on the anti-JSA struggle

A reply to the Brighton article by a member of Subversion who was active in the Manchester Anti-JSA group. From Subversion #20 (1996)