All over the country small groups of public sector workers have been striking, occupying council buildings, demonstrating and protesting against the impact of cuts in their workplaces.

Against the background of a deepening economic crisis, a combination of grant cuts, changes in housing and education finance, competitive tendering and of course the poll tax is pushing all councils, of whatever political flavour, onto the offensive against their workers.

As each of these attacks has come along the unions have argued for co-operation with the employers and "saving our strength" for the bigger battles to come. But each decision to co-operate has simply weakened and demoralised us further. Only when councils have tried to make cuts "without fully consulting the unions" have those unions protested. Some token consultations conceded and they have soon been satisfied. They have then united with the employers in trying to squash any flames of militant resistance by sections of workers most affected by the latest round of cuts.

Many of the small groups of workers now taking action to defend their interests have in previous years, or even months, voted at union meetings for co-operation with the employers, only to find now exactly what that means in terms of job losses, cuts in services, and reductions in working conditions. This apparent contradiction is being exploited for all it's worth by the unions who wave the flag of "democracy" against anyone who refuses to co-operate, implying that these 'refuseniks' are "out of step" or "on their own". The unions deliberately hide the widespread nature of the anger and revolt that is building up, hoping to keep each section of workers isolated and under their control.

But workers are learning to combat these union manoeuvres. In Barnsley for instance thousands of teachers went on a wildcat strike against job cuts despite all sorts of dire threats from both the employers and the unions.

We have to understand that whilst the immediate causes of particular disputes might vary - poll tax capping in one place, privatisation in another, grant cuts elsewhere etc - that these are all part of one co-ordinated employers' offensive. If we are not to be worn down by endless rearguard sectoral disputes, attempts must be made to link all the main disputes together in a single fight against the cuts.

That doesn't mean passing resolutions appealing to the union 'leaderships' to organise something or sitting on our arses waiting for the next 'big' fight. It means using the time released by being on strike to go directly to other workers involved, or in dispute themselves, and arguing for combined and united action. It means controlling any strike ourselves through regular mass meetings, which cut across union and sectoral divisions, and directly elected strike committees.

In this way we can turn the current defensive actions into an offensive against the employers and the government and take a small step towards building the confidence, solidarity and organisation necessary to take on the whole rotten system.

As Manchester City Council goes about implementing the government cuts a number of small disputes have arisen in the libraries, housing departments and elsewhere over things like collection of the poll tax, covering for vacancies and so on. In each case the union (NALGO [libcom note: a predecessor of UNISON]) has sought to keep them isolated and avoid any generalised resistance to the cuts. Their job has been made easier because the majority of workers have previously been persuaded to co-operate with the Labour council rather than oppose them outright.

When you consider the effects of the current cuts this seems surprising, so how did the union pull it off? Basically they manipulated the membership in the following way:-

1. First of all they called a mass meeting early in the year before the practical effects of the cuts were widely known.

2. They deliberately kept the membership ignorant of those effects.

3. They suggested mass redundancies around the corner but only if the council wouldn't negotiate seriously to "sort things out". This tactic combined fear with an easy way out.

4. They made militant sounding noises about strikes but only to secure negotiations not actually against the cuts themselves.

5. They warned that total opposition to the council and the poll tax would leave us isolated. This was a self-fulfilling prophecy to the extent that other union execs elsewhere were saying the same thing.

6. They also warned against being provoked into 'precipitate' and 'futile' action by politically motivated groups like the SWP, who are generally not very popular (conveniently ignoring their own political motives in supporting the Labour Party mainstream!).

7. They had their own ready made, glossy 'do nothing' campaign against those who argued for non-implementation.

8. And of course they controlled the meeting in the usual biased way towards the platform, restricting opposition speakers and resolutions.

This combination enabled them to get a majority in favour of their line, although a substantial minority refused to be brow-beaten. That majority vote is now ritually produced any time someone argues for spreading some action against the cuts. So far their tactics have worked, but they can't keep the lid on the growing anger amongst council workers for ever. We must turn the increasing number of small streams of resistance into an irresistible tide of opposition. 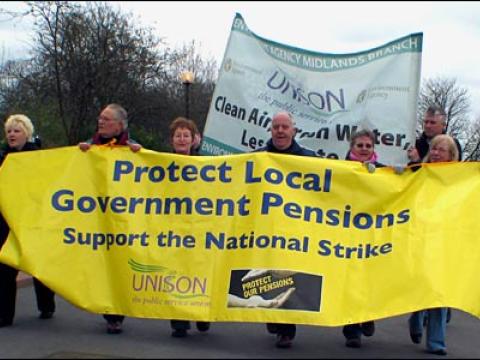 Council services across Edinburgh are set to grind to a halt after workers voted overwhelmingly in favour of a one-day strike. 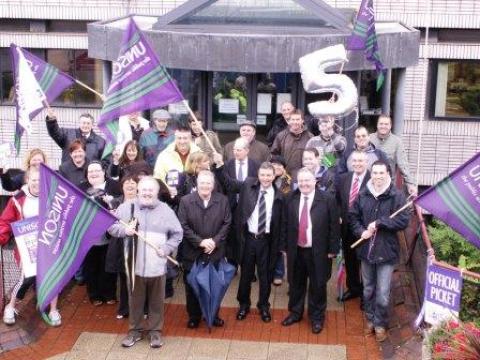