The following events occurred against the background of the aggravating crisis of the global car industry (see also the article on the GM strike in ppnews #1, 3/2005, page 3). At the beginning of June 2005 GM announced the closing of plants in the USA, which would result in the loss of 25,000 jobs in addition to the 12,000 jobs cut in Europe. In the first quarter of 2005 GM lost 1.1 Billion US-Dollars, the worst result in 13 years. A detailed article on the crisis of VW after the corruption scandal is on the wsws-website.

FIAT, Melfi/Italy
The factory in Melfi became well-known in April/May 2004 after an unexpected strike by its workers. Melfi was supposed to be FIAT’s role-model factory. It is a ten year old greenfield plant in the south of Italy with a young, inexperienced work-force on low wages and an extensive net of suppliers. Melfi was said to be the most productive car plant in Europe after GM Opel in Rüsselsheim. In the core plant about 5,000 workers were employed plus 3,500 from the nearby suppliers.
The strike started when workers of TNT-Arvil, the company which is responsible for the internal transport and the transport between suppliers and the core plant, went on strike, demanding the same wages as in other FIAT plants, the abolishment of the severe shift schedules and disciplinary measures. Within a few hours all the workers within the productive net of Melfi joined the action. The strike lasted 20 days with the production of 35,000 cars lost by FIAT. The workers blocked the gates and had to defend the picket against the riot squads.
The strike was ‘successful’ in the sense that some demands concerning working time and wages were met, but also in the sense that it showed the weakness of the ‘new’ production model based on tight links between core plant and suppliers (see news on DC/USA below). Recently Melfi was shaken again, this time by lorry drivers whose struggle affected production in the plant.
‘A strike by lorry drivers has impeded the delivery of new cars by the Italian car manufacturer FIAT in the last three weeks. The company informed the public yesterday that the strike has caused serious economic damage. FIAT was now using up its full storage capacity, the company said. FIAT stopped production in its biggest car plant, because parking lots are already filled by new cars awaiting delivery. The strike has obstructed delivery since the 26th of April. FIAT is now moaning about not only its own economic damage, but also that of customers and traders. Some car factories will also be hit by the strike today. A company spokes-person named Mirafiori, Melfi and Cassino. A plant in Ivecco di Suzzera was running on lower capacity, he said. The drivers are protesting against transport companies, not against FIAT. Unions and employers have already been holding talks in Rome in order to stop the strike. FIAT boss Sergio Marchionne said last week that the company’s loss because of the strike was 350,000 Euro until then. The company is trying to deliver cars by train and by ships. The company has not given any figures since then, but newspapers have spoken of losses of more than half a million Euro. The company, which is trying to make its core activity of cars profitable again, has warned it will take legal measures against the strike.’ [http://www.orf.at/ticker/182448.html - 23rd of May 2005]

VW, Navarra/Spain
The introduction of the new collective contract resulted in an unexpected combatative reaction from the workers. Since the introduction the numbers of cars produced has decreased by 2,500, due to several interruptions of production. Company management and the works council have met four times since then in order to resolve the dispute. The workers’ delegates demand wage increases, early retirement schemes and reduction of over-time. The management refuses the demands, saying that the wage rise would increase the total wages bill within the company by 27 percent. In times when VW tries to cut costs by Europeanwide programms like ForMotion wage increases are something impossible, at least following the management’s opinion. The four strikes which took place since the 22nd of April hit a weak spot, given that the start of production of the new generation Polo is planned for early May. On the 13th of May 6,000 workers of VW Navarra and the supplying companies protested in the streets of Pamplona, asking the management to ‘lift the veil from the future of the plant’ and to announce the production volume of the coming years. The VW spokesperson claimed that the protest doesn’t ‘give a positive image to the plant’, which might effect future contracts with VW. Not only VW is in trouble, workers at Renault Commercial Cars plan strikes for the 27th, 30th and 31st of May. For five months management and unions have been negotiating a collective contract without results. [Cinco Dias: 23rd of May 2005]

DC, Haden-Toledo/USA
In the following short article on the ‘revolutionary’ new production organisation at DC it reveals itself that the car industry isn’t really able to ‘revolutionize’ its mode of production. What they call ‘revolution’ is the re-centralisation of assembly work and supplying industries. After the de-centralisation in the 80s, the dismantling of the integrated factories, the suppliers are now returning to the main plant. De-centralisation was an answer to the exercise of workers’ power in the big industrial complexes, but in the end proved to be less productive.
After two decades of down-sizing and outsourcing the automobile companies seem to trust the enforced peace and are re-concentrating the forces of labour – thereby counting on the willing cooperation of the unions.
‘The Auburn Hills-based automaker has named two general contractors to head up the construction of its supplier facilities within its Toledo North Assembly complex. Three suppliers will be located within the “footprint” of the plant, allowing for a revolutionary partnership. The three supplier buildings will be located on the north side of the plant, adjacent to the final assembly facility. Bodies and chassis will travel on conveyor belts between facilities, eliminating costly transit. DaimlerChrysler estimates this system will save the company more than $300 million, which will be redirected into product development. Sterling Heights-based Kuka Group will be responsible for body work, while Auburn Hills-based Haden will take care of painting. Chassis operations will be completed by the Ohio Module Manufacturing Co. The DeMattia Group, a Plymouth-based construction firm, has been selected as the general contractor for the 460,000-square-foot Haden facility. The partnership between the two companies began in September 2004, with construction beginning two months later. According to DaimlerChrysler officials, the Toledo facility is the first of its kind in the North American automotive market. Many in the industry feel that this plant will soon set the standard for OEM/supplier relationships.
A landmark agreement with UAW Local 12, which represents workers at the Toledo plant, is one of the main reasons why the project is on track, Lindland said. “The UAW certainly has to be involved in these kind of situations, and they really need to work to support these kinds of cost-saving measures that the Big Three so desperately need,” Lindland said. Although the supplier facilities will handle many of the tasks previously conducted by DaimlerChrysler workers, no jobs will be lost as a result of the plant’s transition. Workers at the automaker’s Parkway Annex facility in downtown Toledo, which is planned to close in 2006, will be offered first dibs on the new jobs created by the suppliers. As many as 15 suppliers could eventually be a part of this revolutionary partnership, however, DaimlerChrysler officials have not yet commented on which ones, or if they too would be located within the plant’s vicinity. The $2.1-million project is slated to be completed by the end of the year, with the first vehicles rolling off the line by early 2006.’ [http://www.detroitautoscene.com - May 2005] 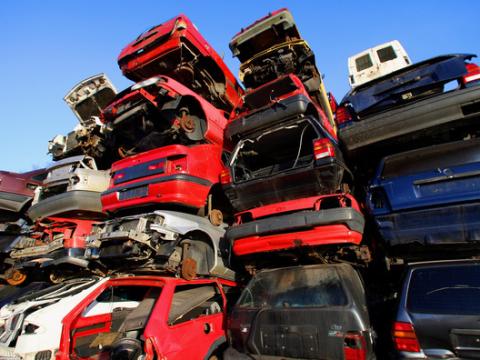 The end of the automobile

An analysis focusing on Germany of developments in the global car industry between its inception and the financial crisis of 2008-9.