Aims and principles of the Syndicalist Workers Federation

The Aims and principles of the Syndicalist Workers Federation, which was the British Section of the anarchosyndicalist International Workingmen's Association (IWA). For a history of the IWA see A short history of the IWA, 1922-Today on libcom.org/history

THE SYNDICALIST WORKERS' FEDERATION seeks to establish a free society, which will render impossible the growth of a privileged class and the exploitation of man by man. The SWF therefore advocates common ownership and workers' control of the land, industry and all means of production and distribution on the basis of voluntary co-operation. In such a society, the wage system, finance and money shall be abolished and goods produced and distributed not for profit, but according to human needs.

THE STATE The State in all its forms, embodying authority and privilege, is the enemy of the workers and cannot exist in a free, classless society. The SWF does not therefore hope to use the State to achieve a free society; it does not seek to obtain seats in the Cabinet or in Parliament. It aims at the abolition of the State. It actively opposes all war and militarism.

CLASS STRUGGLE The interests of the working class and those of the ruling class are directly opposed. The SWF is based on the inevitable day-to-day struggle of the workers against those who own and control the means of production and distribution, and will continue that struggle until common ownership and workers' control are achieved.

DIRECT ACTION Victory in the fight against class domination can be achieved only by the direct action and solidarity of the workers themselves. The SWF rejects all Parliamentary and similar activity as deflecting the workers from the class struggle into paths of class collaboration.

ORGANISATION To achieve a free, classless society the workers must organise. They must replace the hundreds of craft and general trade unions by syndicalist industrial unions. As an immediate step to that end, the SWF aids the formation of workers' committees in all factories, mines, offices, shipyards, mills and other places of work and their development into syndicates, federated nationally. Such syndicates will be under direct rank-and-file control, with all delegates subject to immediate recall.

INTERNATIONALISM The SWF, as a section of the International Working Men's Association, stands firm for international work- class solidarity. 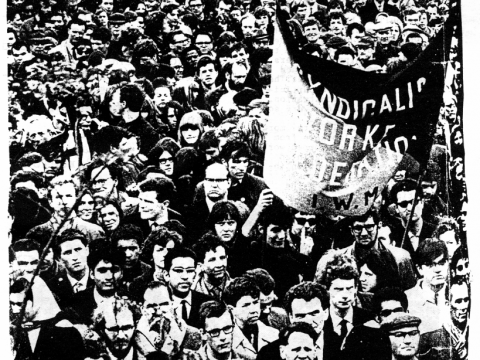 Tom Brown's 1968 description of the Syndicalist Workers' Federation, a UK based organization that…

This is a short pamphlet put out by the DAM in around 1988, as interest was growing in England and Wales against the Poll Tax, which was already well advanced in Scotland.