HENRY NEVINSON was a celebrated journalist of the early decades of this century, famous for his exposure of slavery in Angola and the Cocoa Islands. He was a subscriber to FREEDOM and a friend of Kropotkin and Malatesta. This article was reprinted in his book Essays in Freedom (1909).

IT WAS A STRANGE CONTRAST THAT WAS PRESENTED in the chalk-pit of the Bradfield College Theatre one Saturday. The temperate English sun shone his best, and a sweet-smelling wind just rustled the woods of June. Thrushes sang in the thickets round the topmost seats, house-martins flitted over the orchestra, and under the heavy oaks of the park the tame deer stood browsing like cattle in the chequered shade. Smooth cricket-fields and close-clipped lawns; and old buildings of red brick told of fatted peace and immemorial comfort. Clean and well-fed boys were there, instructed in unhesitating obedience as the primary rule of life. Men and women sat in the audience who had never transgressed a human law, nor questioned the ordinances either of rulers or of society, but were taught to regard rebellion as a capital crime. Few of them had ever been called upon to risk as much as a hat for a principle. Fewer still had ever dreamed of missing a meal for the possession of justice or of love.

But before their complacent eyes was enacted the sternest tragedy of rebellion and justice and love, and upon how different a scene! It is war-time at its most loathsome moment—two days after battle. The plain of Boeotia is scorched with heat. Dust storms go sweeping in darkening clouds over the gravelly hills round Thebes. The dead of the defeated Argives, who had tried to carry the city by assault, are being hastily buried in the sand and rocks outside her seven gates, and already those that remain exposed are blackened by death and the sun. The smell of their putrefaction poisons the air. The street dogs and vultures of Cithaeron are at work on them, and fragments of their flesh and bones are strewn through the town, even upon the altars of the gods. Among them lies Polyneices, slain by his brother, who himself was slain by him—ill-fated offspring of hideous relationships. Let others be buried as time may allow; such was the sacred custom among all Greeks, for death brings forgiveness to mankind. But for Polyneices no burial shall be permitted. His body shall never rest in the purifying earth, but, torn by beasts and birds, shall rot in sun and wind and rain, unwept, uncomforted and unhallowed. Such was the decree of Creon, who had claimed the kinship of Thebes upon his other nephew’s death. The law was confirmed by a proclamation ordaining in legal jargon that any person or persons found attempting the burial of the aforesaid corpse by digging, covering, sprinkling, or any other form of interment whatsoever, should be liable to the penalty of being stoned to death in any such public place as the law directed. A guard is set to watch the body. Loyal citizens tremble and obey.

On such a scene the great drama of rebellion opens, and Antigone enters, resolved upon her holy transgression—Antigone, the same high-hearted girl who had once guided her blind father to the olive woods of white Colonus, whence Athens can be seen. At her side the poet places her sister, the pretty, comfortable Ismene, just as in another drama he places a gentle sister at Electra’s side for the type of an average easy-going mind that acquiesces in authority and carefully keeps within the law. Ismene pleads all the common arguments for doing nothing; the thing is impossible, she says; “it is no good starting a wild-goose chase”; it is always a pity to make a fuss; works of supererogation are uncalled for; besides, the sisters are poor, weak women, both too weak to strive with men; and then, surely it is the duty of every citizen to obey the State, and no one can be reproached for submitting to superior force. But, come what may, she will at
least keep her sister’s secret—oh, she may be trusted to do that!—and, with a final touch of human nature, she insists that it is for her dear, dear sister, not for herself, that she fears.

It is the same with the Chorus. Kindly and well-meaning gentlemen, they are blinded by the dull caution of age and custom. They are abundantly sympathetic; they feel keenly for everyone; tears stream from their eyes when Antigone is led to death; they do their utmost to console her on the ground that it is a fine thing to die young and healthy; and we can imagine their well-bred start of shocked surprise when the ungrateful girl rejects their consolations as a mockery, and asks them at least to have the decency to hold their tongues till she is gone. Why, it is decency they live by—decency and the law! They have been nurtured on their favourite saying, “Nothing out of the ordinary comes into a man’s life without bringing a curse.” And so, although they admire man’s cleverness very much, and wonder at his skill in sailing the sea, and ploughing the earth, and taming the horse, and protecting himself against rain and frost and disease, they are terrified out of their wits at the thought of a man’s or woman’s daring, and only pray that no one who disobeys the law may ever sit beside their hearth. So with love; they say many beautiful things about it—things that have flown round the world—but they are mortally afraid of it. There is something in love that makes light of laws, something excessive and immeasurable, and the heart possessed by love is no better than insane.

It is the custom to hold up Creon as the type of the blood-thirsty tyrant, the embodiment of capricious despotism. But that is unjust. He is only the average official, the common slave of law, order, and routine. In usual times he would have been regarded as a model ruler, always setting public interests above his own or his family’s. There is no nasty nepotism about him, at all events. He is continually talking about duty and the State. He knows that the State expects every man to do his duty, and through all his words we feel what stirring speeches he must have made on Empire Day in Thebes. To the State he is devoted heart and soul, and in its service he will sacrifice all his natural affections. Though on these grounds he esteems himself a first-rate administrator, he palliates possible mistakes by the weary old saying that any government is better than none. He is not an exceptionally evil nature; it is only the official nature hardened by a crisis. His mistakes are the official’s mistakes. If anyone opposes him, he at once suspects “sedition” or “corruption”. He cannot imagine a man differing from him except for treachery or bribes. Rather than depart from law, he will welcome the desecration of altars by foul impiety; and, as the surest mark of the official mind, he is
perpetually haunted by a peculiar abhorrence of anything so subversive of official routine as the interference of women in politics. “No woman shall constrain a ruler’s laws!” “Females shall have no vote while I’m alive!” Again and again he blurts it out with a persistency that shows how keenly the whole question was occupying the mind of Athens, as is also seen in the three woman plays of Aristophanes.

In the midst of all these worthy supporters of the law stands the rebel girl Antigone, the most heroic figure in Greek tragedy, or second only to the rebel Prometheus, who defied the decrees of Zeus himself. There are many underlying motives in the play—the position of women, the position of kings, and the “romantic” love between unmarried lovers, a motive almost unknown in Greek literature. But the great and central theme of the play is Antigone’s appeal from the laws of State to the primal laws of righteousness which lie deep in the heart of mankind, unaffected and unrestrained by the panoply of ordinances that hedge rulers and their citizens round. The poet’s art has diffused that irresistible appeal through the whole play, but for one moment it is concentrated in Antigone’s celebrated lines:

It was not God who bade that edict pass,
Nor were such laws decreed for mortal men
By Justice dwelling deep among the dead;
And for your ordinance, it had not the sanction
That could compel us to override the laws,
The unwritten laws, divine, immutable,
That are not of today or yesterday,
But abide for ever, none knowing whence they sprang.

In these lines is hidden the secret of the strange and incalculable forces which ordinary, law-abiding people like Ismene and Creon and the Chorus find so disturbing and terrific. For these forces are the laws that have no letter, and to speak of keeping within them would be ridiculous, for they have no limits and no pale. Custom, tradition, injunctions, and penalties cannot even enter into the region where they move, and duty has no part in them at all. For they are possessed of a transfiguring power, and under their radiance, duty shrivels to a dingy heap of rags.

These are the great unconscious instincts of the world, the assured impulses that redeem mankind from hesitation and half-hearted compliance. Love is one, as the poet says, courage is another, and a third is that unlawful holiness which drove Antigone to defy the worst that the State and stoning and starvation and suicide could do against her. She is no iron-hearted woman. When she finds her brother’s body laid bare of earth again we hear her cry “like a wild bird robbed of its nestlings”. She longs for life and love and children, bewailing her virginity, as other Greek girls bewailed it. One line shows a peculiar tenderness for her lover, unusual in Greek. When Creon shouts he will have no evil woman wed a son of his, she only thinks of the slight put upon her lover in supposing his choice could be evil. But she wavers only once for a moment in the confidence of right, and it is significant that not only does she win the Chorus and even Creon to her higher faith, but all along, as her lover says, the common people were violently on her side, counting her worthy of golden praise. For psychologists tell us that women and the poor live always closest to the deep unconscious truths of the world. 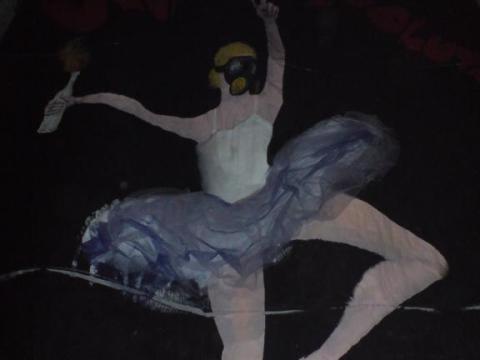 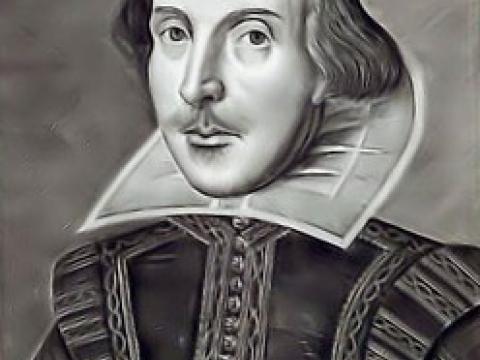 "Shakespeare was a fake!" horror shock!

A kind of jokey leaflet produced in the autumn of 1984 to be handed out for a performance of Shakespeare's "A Winter's Tale". 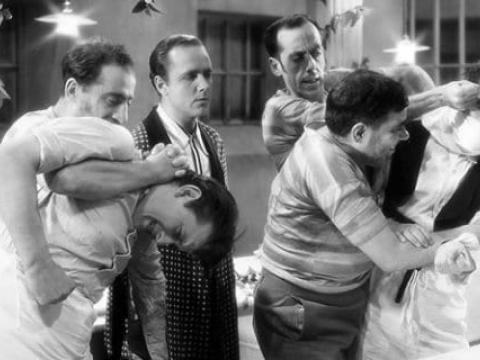 An introduction to my blog, and notes on an anarchist approach to industrial art

A short post detailing the ethos behind my blog, and an example of me attempting to apply this ethos…