Leon Trotsky wrote, "The attempt to represent the Soviet bureaucracy as a class of 'State Capitalists' will obviously not withstand criticism. The bureaucracy has neither stocks nor bonds. It is recruited, supplemented and renewed int he manner of an administrative hierarchy, independently of any special property relations of its own. The individual bureaucrat cannot transmit to his heirs his rights in the exploitation of the State apparatus. The bureaucracy enjoys its privileges under the form of an abuse of power. It conceals its income; it pretends that as a special group it does not even exist. Is appropriation of a vast share of the national income has the character of social parasitism. All this makes the position of the commanding Soviet stratum in the highest degree contradictory, equivocal and undignified, notwithstanding the completeness of its power and the smoke screen of flattery that conceals it" (The Revolution Betrayed, 1937).

In every sense of the word, Trotsky is proven wrong by the facts.

The "bureaucracy" has stocks and bonds.

This represents profit in payment for the use of capital. This is exploitation of wage labor in the most finished form, through State capital.

The bourgeois right of inheriting property is part of "Soviet" law. The state capitalist has the right to bequeath to heirs his share of state bonds. Thus, he who owns bonds posseses [sic] the right of exploitation of the workers through the State.

In addition, the position of the Russian ruling class inside the State apparatus from which it receives "salaries" of administration is a veiled form of extracting surplus value from the exploitation of labor. In industry and on the land the relations in production are revealed by the relationship of the classes to the State property (means of production). Through its successful counter-revolution, the Russian State capitalists have liquidated the workers State power and established its own power, the power of a State Capitalist class. This class through its Bonds, i.e. 5% interest for the use of its capital by its own State, and the "salaries" for direct exploitation by its State through its Statefied Industry and Agriculture, constitute its relation to production and the basis of its class privileges, such as superior food, clothing, housing, education, maids, butlers, chauffeurs, yachts, etc.

State capitalism in Russia shows its face through government bureaus (i.e., the trade unions, factory managers, "soviets", N.K.V.D. security police, forced labor camps). The trade unions, as one of the segments of the State, as the trade unions in Western capitalism, are a labor front of the Russian state for increasing production at a rate (in concurrence with the laws of motion of the capitalist economy) far outstripping the level of life of the masses.

On the land, as in industry the governing principle is that which is stated in the Russian constitution, "From each according to his ability, to each according to his work." An abomination of Lenin's analysis of the lowest stage of communism,--"consisting in the distribution of the articles of consumption" according to work performed" (and not according to need). Lenin, "State and Revolution, Int'l Publishers, 1932, P. 77. An abomination because there is no evidence of any tendency to equalize or abolish the wages system in Russia. On the contrary, the rise of a new capitalist class has revived the most varied, contrasting wage differentials as great as in Wester [sic] capitalism. The peasantry still exists as a class and is permitted shares in the collective farms. These collectives are like capitalist corporations in that the petty-bourgeois shareholder in the collective, receives a return on his shares in proportion to the amount invested. While the Russian legal code, forbids him to hire labor, his state bonds pay interest out of the exploitation of the industrial worker in the city. In addition, this petty bourgeoisie has investments in savings banks and can hand down their property to heirs. The directors of the farm collectives stand in the relation of a board of directors (State Capitalist) to this petty bourgeois.

The nationalized property of the October Revolution is liquidated. In its stead is property state owned and administered by a State capitalist class, for which there is no other term than the classic Marxist term, State Capitalism.

The key to understanding the process by which the workers lost State power in Russia, and thus their control over the economy was provided by Lenin. For example, on the New Economic Policy he wrote

In addition, he stated

State capitalism in the form that we have it here is not dealt with in any theory, or in any literature, for the simple reason that all the usual concepts connected with this term are associated with the bourgeois state in capitalist society. The concrete form state capitalism took in Russia at that time was setting up of 'seventeen companies with a combined capital amounting to many millions -- we have formed companies jointly with Russian and foreign capitalists.' - Lenin, Selected Works, Vol. IX, P.C. report of C.C. to IIth [sic] RCP Congress, Mar. 27, 1922, p. 339.

Further, "The simplest case -- of how the Soviet government -- implants state capitalism in concessions" -- "The cooperatives are also a form of state capitalism, but less simple". A third form: "The state enlists the capitalist as a merchant and pays him a definite commission on the sale of state goods and on the purchase of the produce of the small producer. A fourth form: the state leases to the capitalist entrepreneur establishments, hunting and fishing territories, forest sections, land, etc, which belong to the state, the lease being very similar to a concession agreement" (Lenin, Selected Works, Vol. IX, "The Food Tax," April 21, 1921, pp. 182, 185).

It is clear that we have in the above passages a lucid description of the operations of the State in the sphere of capital investment, both, in the present trend to state capitalism in western capitalist states, as well as that of Russia.

Only those whose political thinking belong in a museum of ancient antiques can fail to see the destruction of workers' control over the means of production; the transformation of the trade unions into state instruments for the exploitation of the workers; the substitution by factory managers of rank and file shop delegates; the transformation of the soviets into rubber stamps for the bourgeois measures of the Russian state; the erection of a military officers corp with rank, and medals demanding obeisance from the private, the secret police; piece-work wages on a national scale; the reestablishment of norms in sex and marriage similar to the Catholic church; the forced labor camps; reactionary decrees on art, music, science; signifies that in the relations of production, as well as in the super-structure (culture, morality, religion) the State capitalism of the workers' state that Lenin spoke of has evolved through a series of internal convulsions into the State capitalism of the bourgeois state.

It is obvious that on this fundamental problem of revolutionary Marxism, Trotskyism collapses. We mourn Trotsky, but we do not mourn the death of the fiction that Trotskyism is the continuation of Leninism.

That section of Trotskyism which admits that Russia is not a workers' state and will not defend it, nevertheless has not broken the strings attaching it to the false line of Trotsky. By insisting on analyzing and characterizing the present Russian system as bureaucratic collectivism, it reveals that it considers as as [sic] Trotsky did, and this is the heart of the question, that State ownership of the means of production is impossible under capitalism. Therefore, they, along with the "orthodox" Trotskyists fall into the trap of advocating state ownership of communications, transportation, etc. under capitalism, as a progressive step. This leads them to form a common front with Bourgeois liberalism, (and when is liberalism not bourgeois?).

The characterization of the present trend in world economy as state capitalism, of which Russia is part is an appellation dignified in the best tradition of Marxist thought.

Marx understood that the struggle of capital to enforce its property rights, at a certain stage, reaches the state level. He wrote, "In former times, capital resorted to legislation, whenever necessary, to enforce its proprietary rights over the free laborer. For instance, down to 1815, the emigration of mechanics employed in machine making was, in England, forbidden, under grievous pains and penalties" (Karl Marx, Vol. I, "Capital," p. 628).

Further, he wrote, "In consequence of the civil war in the United States and of the accompanying cotton famine, the majority of the cotton operatives in Lancashire were, as is well known, thrown out of work. Both from the working-class itself, and from other ranks of society, there arose a cry for State aid" (ibid, p. 629).

For example, Poland received $450,000,000 in credits from Russia, in a treaty encompassing $1,000,000,000 dollars in reciprocal exchange, in January 1948. Entire economies are monopolized by Russian capital. It aims to be the main capital exporter to its spheres of influence, or it must give way in the competition with rival capital exporters. Russia must offer in its spheres of influence machinery, parts and replacements or be defeated in the deep-going economic conflict with the U.S. for the world capital goods market.

Under Lenin and the Bolsheviks, annexations, secret treaties, indemnities were renounced. They declared, "Let us imagine what would happen if the workers Soviets of Great Russia were to attempt by force of arms to coerce the working class of other nations into submission. The latter would mean the complete collapse of the whole of all proletarian movements and the Fall of the Revolution".

What Lenin and the Bolsheviks imagined has com [sic] to pass.

The Russian State under Stalin expands by export of capital, military conquests, land grabbing and propaganda pressure. It builds mixed capitalist corporations thruout [sic] Europe i.e., with Russian state bank representatives and native boards of directors. Russia employs her military occupation and communist parties to reenforce [sic] her state capitalist rule in order to produce the capital goods on which depend her imperial position.

Written by D.A. for the January-February 1949 issue of International Bulletin, a periodical put out by the so-called American Fraction of the Left Communist International. 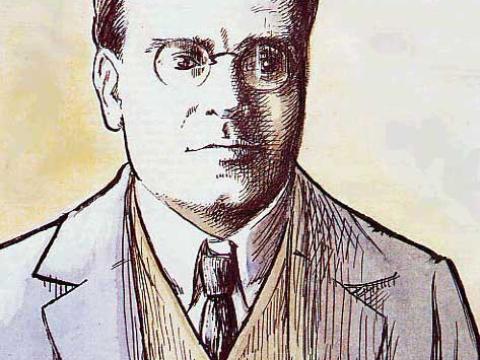 Goldner assesses Bordiga's analysis of the nature of the 'socialist' countries, and the centrality…