In several aspects Genoa, July 2001, in the development of storming summits since Seattle in November 1999, stands for a turning point: in its making migration and exploitation an issue on a broad level; in the broad social mobilisation that, in Italy, went far beyond the circles of "event hoppers"; and at last in the state's reaction to these mobilisations which was already signalled in Goteborg and behind which lies more than just a Berlusconi government.

It was the first time in the series of storming summits "against globalisation", that with the Thursday, July 19 demonstration, migration and the exploitation connected with it were made issues, and that lots of immigrants took part. Though the Thursday demo was shadowed by the following days' repression, it nevertheless may have been the politically most important event in Genoa. Some 50 000 folks, amongst them about 5 000 immigrants in their own block, demonstrated against the illegalisation and exploitation of immigrants. The state's attempts to prevent the immigrants' and the rest of the protesters' coming together have failed. Here lies the chance to go beyond a diffuse "globalisation from below" and to take the offensive and focus on the real proletarian "globalisation".

For Italy, this has a special meaning. For decades, Italy had been an emigration country. It's been only ten years or so that the immigration from Africa or from Eastern Europe has become visible, and it was accompanied by harsh racist attacks, with many injured and also many left dead. The immigrants' block in Genoa showed a certain degree of organisation and of their militant self-consciousness.

But today, the question of immigration poses itself in all of the capitalist metropoles in the same manner, and by capital in the countries of the European Union it is being discussed as a general problem: capital needs more immigration of workforce, not only in numbers but also as a new mixture and a new order of former class relations. At the same time, though, they are confronted with the self-consciousness and the offensive demands of immigrants beforehand, as e.g. the struggles of immigrants in Spain against the new immigration law and in favour of mass legalisation have shown.

In the Italian parliament, one week after Genoa, illegal immigration has been declared a crime which can be sentenced to up to four years in prison (there are similar plans in Germany, now). Furthermore they decided to build more deportation prisons. The stronger repression by states all over Europe is not directed against immigration in general, it rather tries to guarantee the control of the immigrants to make sure they behave as a workforce for capital.

2. A New Movement in Italy

The majority of the demonstrators came from Italy itself, and for most of them it was the first time they experienced such big a demonstration. In terms of numbers, the Friday demo was bigger than all other demos in Italy in the recent years. Genoa gave the impression of a political cultural movement - e.g., many youngsters from Genoa had attended the Manu Chao concert Wednesday night right before the immigrants' demo. Friday's mass militancy was not to be controlled by anybody, it also expressed a feeling of liveliness and an offensive attitude.

Genoa, of course, was also an expression of the broad political alliance, from left-wing parties and trade unions to the Centri Sociali, against the Berlusconi government. In Italy, Genoa was mainly a mobilisation against this new government.

Sure, there is an underlying political game of parties like Rifondazione, but there is also an underlying sharpening of social conflicts. There was a series of strikes in the metal industry in the beginning of July, with big demonstrations in Torino, Roma, Bologna, Firenze, Genova and some Southern cities like Palermo. Representatives of the Genoa Social Forum held speeches at the demos, and thousands of young workers shouted "We'll go to Genoa!". Airports were hit as well, by strikes of air traffic controllers, pilots and flight attendants. In Italy, this fall there will be general negotiations, the health services are to be privatised, and so forth. The conflicts in Genoa, the determination people confronted the cops with as well as the stronger repression, may also be understood as a prelude to future confrontations.

It's not just about Italy, though, and both the heaviness and tactics of the cops' performance cannot be understood by just looking at the Italian situation (see 4.). Nearly hidden behind the escalation on the streets was the fact that there is hardly any basis left for the G8 meetings. Global economy is sliding towards one of its - maybe hardest - crises, and the gathered heads of states aren't able anymore to agree on these questions: neither in terms of interpretations nor in the question how to regulate this crisis.

With the numbers of layoffs and company closures rising as well as the unemployment figures going up and the cuts in welfare payments planned everywhere, combined with massive pressure at the points of exploitation, social conflicts of different dimensions are foreseeable. In France, the policies of layoffs by trusts like Danone and Moulinex are broadly being discussed, and a lot of effort is being put into channeling anger into inefficient boycot campaigns and parliamentary bills. In England, this year there have been many riots by youth who feel that Blair's New Labour has nothing left to offer to them. And even if the summit stormers should not be aware of the fact, their militant actions against the symbols of capital and its representatives has - facing the crisis coming up and the lack of ideas to counter it - for the bosses a threatening exemplary function. This is why they - and not only Berlusconi - make sure right from the start they won't accept acts on one's own behalf, no matter in what situation.

After years of a left which is split, paralysed and unable to act, the mobilisations around Seattle etc. might have a future. After Prague, Nice and Davos, this seems to have reached the rulers' minds ...

4. Repression as a Substitute for Social Mediation

Don't prevent the riots, use them for controlled escalation - this quite obviously was the underlying slogan of police tactics in Genoa, but also in GÃ¶teborg and Napoli. The attacks on peaceful demonstrators and a critical public (journalists, media activists) were not accidental. For this purpose the riots were necessary, and sure there may have been some undercover provocators from the cops amidst those activities. But to explain mass militancy out of provocations would mean to execute precisely the division they are looking for, the very goal behind these police tactics (which, by the way, have lately been used elsewhere too, e.g. in Berlin on May 1st, 2001). In order to make the peaceful factions of the critics of globalisation stay away from demos, denounce every form of militancy and hereby return to the merely representative protest and participation in the given forms of democracy, they have to be intimidated.

The - to most everyone - surprising level of police violence has also to do with conditions in Italy (and not "Chile"!). Relatively seen, Italy has the biggest police apparatus of Europe. Shootings on demonstrations, leaving people injured or dead, are not uncommon. This is not just a right wing government policy like under Berlusconi, but has been organised and practiced for many years under left-wing governments. The same goes for the dissolution of the Carabinieri from the military and their special role as a police force under direct government control (similar to the BGS in Germany). And the beating and shooting cops sure knew there'd later be protection from above.

As early as March 2001, at the demonstration against the »Global Forum on Information Technologies« on March 17, the Italian police had already beaten up peaceful demonstrators they had encircled - and those days Berlusconi wasn't in power yet. Here in Germany, that event has hardly been discussed. It shows that the turn in the state's attacks on the »global action days« cannot just be reduced to the fact that Berlusconi got to power.

In Goteborg, it was »democratic Sweden« having the cops beating up peaceful dancers in the streets and shooting at demonstrators. And there, too, street riots had been used for escalation. The attacks on peaceful demonstrators are not being made by mistake oder accidentally (as some now try to understand it or as representatives of the »tute bianche« immediately after the murdering of Carlo Giuliani accused the cops and demanded they'd better go to the camps of the »black block«), but they signify the tendency towards the capitalist state in times of crisis.

The more the mediating forms of the welfare state are vanishing or becoming inefficient, the more the state will have to switch over to repression against every kind of self-determined movement - in a right wing governed Italy as well as in social democratic Sweden or in Red/Green governed Germany. The cops' attacks against demonstrators in GÃ¶teborg and Genoa were not only directed against the respective people under attack. They are directed against all those who might have reasons enough to push through their desires against capital in a militant and collective way. Since in times of crisis other forms of mediation become less and less efficient, limits were to be set for movements as a preventive measure. Nevertheless, also in future times they will combine repression with offers to the socalled »civil society« to participate in the regulation of the crisis - and not only to divide and pacify the movement. In fact, they also need this critical potential for regulation and mediation (especially top politicians of the Green Party immediately after Genoa made statements in this sense).

5. The End of Event-Hopping: New Quality and Breaking Points

After Genoa, the debate was dominated by the issue of repression, overlaying everything else (e.g. the immigrants' mobilisation). The »movement's« weakness lies in the fact that it mainly discusses completely self-referingly about the repression against the left, whereas the state always understands violence as social violence - i.e. as a kind of violence indispensable as the framework for an antagonistic class society. In many leftists' understanding of politics, movement only exists as their own activity. This is why they see the state only in contrast to themselves but not as the necessary frame of a social order based on social violence - exploitation and poverty.

As a kind of reflex to the shock of the cops' violence in Genoa, people are often looking for protection by the often invoked »civil society« through appeals to the rule of law and democracy. Here, the state's policy of escalating and dividing has the desired effect: following from the instinctively correct reaction »after Genoa«, i.e. to emphasise common goals of the movement, the question of perspective is being posed nearly exclusively on the level of the question of repression and/or violence. Behaviour like this doesn't just behind the discussions »before Genoa«, but it also ignores the real new developments: The important new aspect of Genoa was that behind this »civil society« invoked in the recent years, in the mobilisation aspects of social antagonism showed up and became part of it. In the context of summit storming with its necessarily symbolic character, real struggles come into view, struggles the left has up to now only discussed abstractly. Now it might have the opportunity to refer to them in a practical way. 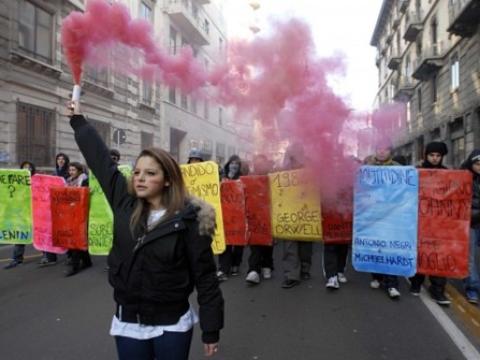 Unrest becomes rage: Mobilisations against the crisis in Italy 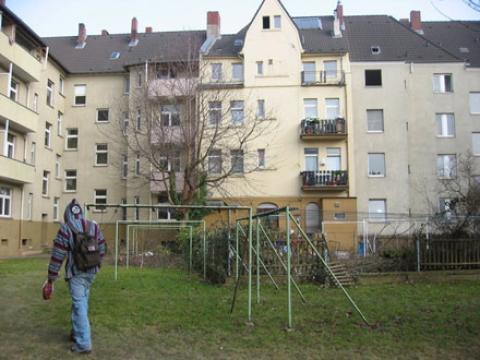 The Ideology of "Globalisation"