Insurrection and a conservative revolution: some thoughts on the recent riots - Raphael Schlembach

Raph Schlembach looks at the London riots and the absence of any Left presence. Originally published in September 2011.

1. What if there was a riot and we weren’t invited?

The question sums up the dilemma that an undogmatic and autonomous left has battled with since the riots and looting that started in Tottenham early last August.

After the black bloc on 26th March, Parliament Square on 9th December or Millbank on 10th November lat year, collective outbursts of anger on Britain’s streets seemed once again inextricably linked to a progressive political project. Riots had become a bit of a romanticised ideal, fostered maybe by the kind of images that Crimethinc & Co have painted of them, by the youtube images of anarchist demonstrations in Greece, or by the battle stories recounted of the resistance to Thatcher’s austerity Britain. So when reports came through of burning police cars in Tottenham, many would have had an initial moment of hope and excitement.

The problem was: riots are not always pretty, and do not always follow a clearly-defined political direction. This time, alongside a sense of collective joy, solidarity and youthful energy, they displayed a certain disdain for human suffering.

Most anti-authoritarian responses recognised this complexity. They did not feel the need to state an ‘unconditional solidarity’ with the rioters, nor did they let themselves be drawn into condemnation. But there is sometimes a tendency to fetishise chaos and violence as being insurrectionary, or even regenerative (in this case it was mainly the SWP that saw the riots as a legitimate and necessary expression of class anger, without – alas – forming a visible street presence themselves; one article in Socialist Worker called for ‘All Hail to the Mob’ ). In an inverted form, the right has been guiltier of fetishising the rioting by focusing on violence as the main expression on the streets those days (neglecting the many other expressions of political anger, togetherness, and solidarity). When a man steals ice-cream from a vandalised shop to hand out to the crowd outside, as reported, this can hardly be explained away as ‘violence’ or ‘rioting’. Or similarly, when a friend was given a few packets of cigarettes by looters coming out of a cornershop, this sounded more like Robin Hood than greed.

A related problematic response to the events was the kind of Schadenfreude that can come along with the phrase ‘we told you so’. Nihilistic and apocalyptic visions of an end to law and order can at times accompany insurrectionary theories, and many, secretly or not so secretly, would have taken pleasure in the talk of social collapse.

As insurrectionary literature goes, ‘The Coming Insurrection’ is a good example for that kind of language of decline and collapse. The text describes a “permanent state of deterioration” and a “chronic state of near-collapse”; a state of capitalist modernisation that destroys traditional family and community ties.
The problem here is that the prediction of social collapse, of decline of community and solidarity, of the kind of values that make society function, is often inherently tied in with a conservative fear of cultural and moral degradation. And this conservatism can sometimes disguise itself as openly radical.

The best example here is probably the ‘conservative revolutionary’ ideas that spread far across Europe in the early 20th century. These, like sometimes still today, were tales of deterioration and inadequacy of the Western values of social mobility and individual development in the face of a rapidly modernising world and portray a deep-seated pessimism towards progress. Mostly, the conservative revolutionary response was the call for a radical nationalism and chauvinistic authoritarianism. Oswald Spengler’s book ‘The Decline of the West’ is emblematic for this, but many went much further and argued that only a complete radical transformation, a (spiritual) revolution, could reinstall the kind of social bonds that had been destroyed by Enlightenment-type liberalism.

While a progressive answer to the conservative repression after the unrest is to state its social context of alienation and austerity, there is an inadequacy in the left’s demand for more welfare support and better public sector provisions. It’s not that these aren’t bitterly needed. But it risks becoming a policy of appeasement, a policy that tries to pacify the ‘dangerous underclass’. The logical outcome of seeing those engaged in the riots as neglected kids is to look towards the councils, youth services and welfare state for an answer.

So how should an undogmatic and anti-authoritarian movement respond? To begin with, we should probably be wary of treating those involved in rioting, looting, and mugging simply as victims of failed state provisions. To assume so risks being patronising. These kids and their families won’t be bought off with a new swimming pool, youth club or basketball court.

It is of course very tempting to ‘think like a state’. What would ‘we’ do if we were in government? How would ‘we’ redistribute wealth to benefit those that appear worst off? To counter this, many that see themselves as part of an undogmatic left have long argued for a notion of autonomy.

From the perspective of autonomy, the riots are surely political. They assert an agency against the idea that they are merely a reaction against urban poverty. They make no demands, not of the institutionalised left, not of the state, not of capital. They simply act for themselves without the worry of representation and communication of their views and ideals.

So importantly, these riots can be seen as ‘more than just riots’, with a sense of strength developing, a sense that (young) people are powerful if acting together. As Gus John, veteran chair of the Manchester Black Parents Organisation, says in his new book about Moss Side in 1981: they are “not just disenfranchised by lacking wages through which they can live dignified lives; they are also denied the tools by which they can organise in defence of their lives.” Many people would have experienced these days in early August as empowering, not because of but in spite of the lack of formal demands made to politicians.

The problem for the left is also one made in-house. The values that these riots stand for and the values that the left represents are often fundamentally opposed. The first gap already appears when we look at the notion of community. This has not just been a left-wing buzzword but has received tremendous, and at times mislead, support from anarchist and anti-authoritarian groups. Community-organising has put on the map ideas of rootedness in a locality and belonging to a place.

In their own way, the riots symbolise an attempt to break out of these communities. Community can be repressive. Community can be authoritarian, based around family and hierarchy, it can be small-minded and insular. Those who are burning their communities, their neighbour’s cars, their social housing offices, their local off licenses certainly don’t seem to have much respect for this kind of notion of community.
They look much further than the borders of their own estates and neighbourhoods. They present an individualism that cherishes adventure, machismo, and personal advancement. Just like the 1968 rebellion was for many young people also a rebellion against family ties and society’s established structures, today’s youngsters won’t be much inclined to listen to local elders and community leaders.

Annoyingly then, the riots are not political in the sense that we would like to see them. They are destructive without being nihilist. They accept consumerism and entrepreneurialism, even to such an extreme that they are prepared to go to prison for a flat screen TV. These youngsters have chosen consumerist society as the society they want to live in, not the small idyllic communities that so many social conservatives want to imagine. As ‘The Coming Insurrection’ states so poetically: “They find it more humiliating to work shit jobs than to go to prison”. They do not however reject the capitalist promise of a life in luxury.

If we want to detect anything radical in the riots then it is exactly that which is decried as immorality. It is the idea that we won’t settle for the scraps of affluent society and be appeased by ‘immaterial’ values. But the left’s task is to show that the consumerist promise in a capitalist system will always be unfair, violent and unfulfilled.

The response to the social unrest of the past few months, including the public sector strikes and the student demonstrations, has been a massive shift to the right, and particularly to a conservative authoritarianism. This was surely to be expected from the usual quarters such as certain tabloid papers and the government coalition. However, this has also included liberal and social democratic commentators as well as the ostensibly non-partisan judiciary.

There has been overwhelming public support for harsher policing, for stronger authoritarian intervention and punishment, even for an outright class war upon the poorest in society. The calls for death penalties, for live ammunition to be used against looters, for benefit cuts for those convicted of petty crimes and their families, are essentially a moral assertion of conservative values.

Our first task is probably to identify and understand this social conservatism for what it is; especially where it hides itself behind a moral positioning against all kinds of deviance from rules and regulation.
A couple of popular arguments spring to mind here. The first follows a familiar, ‘progressive populist’ line: ‘the self-enriching behaviour of bankers and politicians is morally just as deplorable as that of the looters’. It is not just left-wing voices; also the right has made the connection between looting and the MPs’ expenses scandal. This is not surprising. The moral populism that demands decency, honesty and altruism from both poor and rich fits perfectly into the conservative framework.

A similar problematic was created by the short-lived appearance of vigilantism in some neighbourhoods and the longer-lasting and much-publicised ‘community clean-up’ of damaged high streets. Some have stated the principles of mutual aid and self-organisation as reasons for cheerleading such initiatives, and there were indeed some positive community responses in the aftermath. But again there is a more sombre side to this, not only because EDL activists were sometimes in the midst of such activity. The (far) right obviously lays a traditional claim to this sort of self-managed response. Historically, social unrest of the kind we’ve been seeing has given legitimacy to a vigilantism that is fundamentally racist and classist. As much as we want to see neighbourhoods and communities looking out for each other, there is an inherent view that authorities can no longer protect us from those elements that don’t play by the rules.

What we have painfully felt in these days and nights in August is – once again – the lack of organisation of the left. The EDL mobilised hundreds of their supporters onto the streets within a couple of days of the rioting. The main TV stations, including the BBC, were practically calling for martial law. The courts made a mockery even of the idea of bourgeois justice. But it took days before any meaningful left-wing intervention into the ensuing debates. A rare example of in-the-streets organising was a ‘Give our kids a future’ march through North London.

It is clear that the gap between the left and the urban (black/youth) movements has increased drastically since the Tory years. The riots in 1980/81 were preceded and followed by much organisation, meetings, engagements, anti-racist music festivals and more. Without this connection, it is not surprising that such popular outbursts of anger don’t take a more political turn.

Raphael Schlembach is an editor of Shift Magazine. 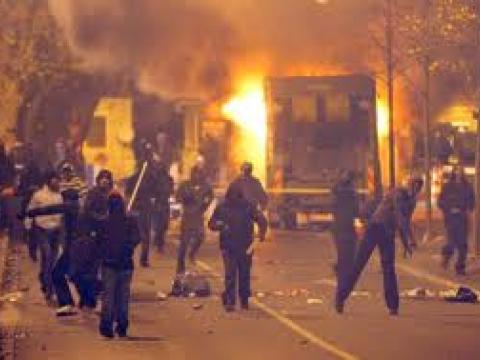 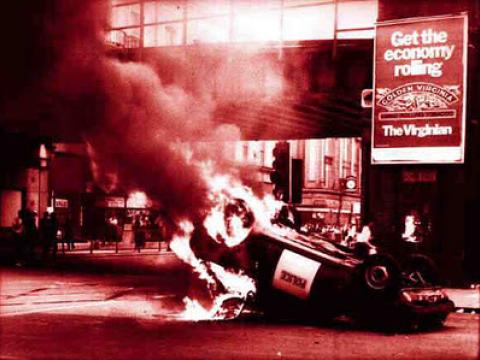 Transpontine investigates some previously confidential Government papers, released to the National Archives at the end of December 2011, which…