Strymonokos Bay in Halkidiki, Northern Greece is the site of a proposed gold mine. Local people opposing the mine mine have confronted blockades by riot police and a curfew.

Solidarity actions against the government and TVX Gold, the mining company, have taken place in Athens and Thessaloniki. On 6/12/97 a bomb was placed at the Industry Ministry. Raids and arrests of anarchists, along with a hysterical media campaign followed. One of those arrested was Nikos Maziotis, a well known anarchist militant. Following his arrest there were a huge number of solidarity actions in Athens, arson, demonstrations and clashes with the police. On 13th of February, Maziotis admitted in a letter to the press that he had put a bomb in the Ministry of Industry and Development, and explained why he did it. This is the first time in Greece that someone has claimed responsibility for the actions they are accused of.

"With the attempt against the ministry of Industry and Development on the 6th December 1997, my purpose was to send a message to the political, business and police circles of this country that their plans, either economic or repressive, are not going to pass without resistance. My purpose was also to send a message of solidarity to the just and dynamic struggle that the residents of Strymonikos Bay carry out, against the installation of gold mining in north-east Halkidiki by the Canadian multinational TVX GOLD.

So, I take complete responsibility for my actions. The "Anarchist Urban Guerrillas" is me. I, alone, made and placed the improvised mechanism in the ministry of Industry and Development on 6/12/97. What was found in the house in 13 Spartis St is exclusively mine. I don't consider myself as an armed guerrilla, but a social guerrilla. I struggle, according to my individual strength, for the subversion of the state and of the State and of the existing social regime, without either rejecting any form of action or considering one as superior to another.

During my political action, I have written and distributed leaflets, posters, I have participated in mass demonstrators and marches, in occupations and conflicts with the repressive forces of the state. In a specific moment of my struggle, I chose this way to send my political message, the message of social solidarity. My past certifies the multiplicity of my revolutionary activity. In 1991 I was convicted for refusal to serve the army, and was detained for eight months in military prison, there are still charges against me for desertion. I was convicted in August of '94 along with 51 other comrades of mine, for the occupation of the economic university, as an expression of solidarity with the anarchist prisoners on hunger strike Odysseas Kampouris and Giorgos Balafas. I was also convicted for my participation in one of the most serious social events of the political reform period, the revolt of the Polytechnic in November of '95, that was an expression of solidarity with the Koridallos jail revolt and also with the political prisoners of that period, anarchists K. Kalaremas, who was on hunger strike, S. Dapergolas, Od.Kampouris, Chr. Marinos, G. Balafas,with the 4 anarchists arrested in a demonstration in Salonica, and also with the objector of military service N. Karanikas.

I am an anarchist and I aspire the total destruction of the State and of the capitalistic regime and its replacement by anti-authoritarian Communes. The only charge I can accept, and it's my honour, is that of subversive activity. If freedom is a crime for my enemies, then yes I admit I am a criminal. So, I recognise as my class enemies those who belong in specific social classes and are responsible for the sufferings of this world, poverty, exploitation, oppression, drugs, prisons, wars, environmental destruction. These social categories are those of state officials, politicians, technocrats, mandarins of capital, bureaucrats, uniformed murderers of the Security Forces and the militarists. These social castes will never disappear from the stage of history and will never give up their power or privileges voluntarily or by persuasion. This is why the social and class war is inevitable. And I am nothing but a political prisoner, a prisoner of the social and class war that is simmering and many times it spreads as a blaze in society.

There has been a lot of talk in the media (which broadcast the organised lie) that I belong in the "second generation of terrorists" I consider these interpretations, rather misinterpretations, ridiculous. I have to say the following about these kind of comparisons. There are three kinds of political violence. Terrorism of the state, which is the most usual and most organised, as the state possesses the monopoly of violence; the "revolutionary terrorism" of organisations with Marxist-Leninist ideology, that through their hierarchical structure reproduce the structures of the state and are a state in miniature; and there is the liberating violence. Social revolutions and revolts are mostly driven forward by fighters who act inside an open mass movement, rather than from "Jacobin" clubs and isolated military organisations of Marx-Leninist ideology. So, I send back the characterisation of "terrorist" to my accusers. More than twenty years of bourgeois parliamentary false-democracy can prove that.

In July of 1976, during conflicts in the centre of Athens between construction workers and the police, a police armoured vehicle murdered a woman aged 66, Anastasia Tsivika.

In 1978, men of MEA (special police units) murdered doctor Tsironis in his home in N. Smyrni, when he declared that his house was a dominion autonomous from the Greek state.

On the 16th of November 1980, during the demonstration from the polytechnic to the American embassy, Iakovos Koumis and Stamatina Kanelopulou were beaten to death by the MAT (riot police).

On the 17th of November 1985, during clashes around the polytechnic, riot-policeman Melistas murdered 15 year old Michalis Kaltezas.

In 1986, in Kessariani, during clashes between strikers of the EDOK-ETER and the MAT, the worker Agelos Mavroudis was killed.

On the 9th of January 1991, the teacher N. Temponeras was murdered by right-wing thugs who wanted to stop the students' occupations of school in Patras.

On the 10th January, 1991, during clashes after the students' demonstration after the murder of N. Temponeras, tear-gas thrown by the MAT set fire to a shopping centre and four citizens died. On the 27th of the same month the death after torture of the Turkish political refugee Souleiman Aknar was announced. He was detained in the Public Security Building.

On the 10th January 1994, officer Lagogianis, who belongs to the police station of Moschato, with 5 shots executed Th. Giakas, during a simple identification.

In December of 1995 an Albanian prisoner was murdered during an attempt to escape from Stavrakiou Ioanninon prison.

In July of 1996, in Piraeus, on the ship Pegasus, inside cabin 53, anarchist Christoforos Marinos was executed.

The same year, in a police blockade outside the city of Livadia, policeman murdered Tasos Mouratis a Roma.

In December of 1997, an Albanian prisoner was murdered by policemen in his effort to escape Diavaton prison in Salonica.

The blame was always on the victim who "committed suicide", or the police guns "accidentally shot", or the policeman was under the state of "legal self-defence". "Justice" has found the murderers either innocent or had simply dropped the charges.

So, who are the terrorists and dangerous ones for society and for the citizens ?

I belong to a political and social milieu that in many cases has proved the danger of its action for the state's and regime's security, as it has repeatedly been an example for the oppressed social parts, about the forms of fight and resistance against the generalised attack of the state. We can take a look at the social events of the last twenty years to prove how true that is. During the 80s, when the social-democratic administration of capitalism was dominant, along with a model of development fed by the state and grants from the EEC, the only social conflicts against the mood of social peace and submission, were those caused by anarchists, with the occupations of the period '84-'85 the march against Le Pen in '84, the occupation of Chemistry University in May of '85, and the occupations of Chemistry and Polytechnic universities because of the murder of Kaltezas. Some years after, in the 90s, occupations, as a dynamic form of struggle, resistance and self-organisation that was inspired by anarchists, became appropriated by other oppressed social parts, workers, students, farmers.

In 1989-90, when social democracy collapsed and the attack of neoliberalism began, workers in industries occupied many factories in Patras, Piraeus, Lavrio, Mantoudi in an attempt to stop the bankruptcy of the enterprises and their privatisation that led thousands of workers to unemployment. In 1990-91 the movement of university and mostly high-school occupations erupted, with the riots and the occupation of the polytechnic. In fact it is this movement that led to the collapse of the right-wing government in the next elections, as it forced it to show its inhuman and anti-social face, through the murder of teacher N.Temponeras and of the 4 citizens burned inside K. Marousi by the tear-gas thrown inside by the MAT.

In August of 1992 the wildcat strike of workers in EAS (public transportation) begin with clashes in Votanicos. Mass expressions of people's violence, like the occupations and arsons of prefectures (Chania-June '90, Iraklio-August '91), blockades and occupations of national roads by farmers in the period 1995-97, or by citizens of local societies against the environmental destruction of their place (Kalamas '87, Aravisos '89, Pouri 93-'94, Avlonas-Keratea '96, Strymonikos '96-'97) prove that when the oppressed people react to the hurricane of the state and the attack of neoliberalism, they, many times instinctively, appropriate forms of action with insurrectionist characteristics. Anarchists have a great part of responsibility in that, as they keep always alive the purpose of resistance and social subversion, even in lulls of the social war.

So anarchists, who never seek authority positions, can rightly feel proud that they have left their own fingerprints on this whole period of social and class struggles.

I send greetings to all my comrades.

Maziotis was sentenced to ten months for desertion and other charges connected with the military. He was taken back to Koridallos Prison, where he is detained, charged for the bombing attempt at the ministry and guns and explosives found in his house. The comrades who were gathered outside the military courthouse chanting slogans of solidarity with N. Maziotis and against the state and the army, attacked the riot police who didn't let them go inside the court.

Policemen were beaten up and injured and forced to run inside and close the gate, as stones fell on their heads, cars and inside the yard of the court house. 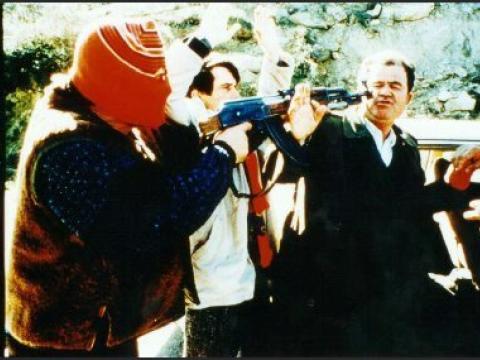 An account by EP of the Albanian south between 20 - 25 March during the uprising, plus two characteristic dialogues.

A call for solidarity by the Initiative for the Rights of Prisoners for the prisoners in Greek jails who are having a co-ordinated nationwide protest since Monday. Included are the demands of the prisoners.
Image 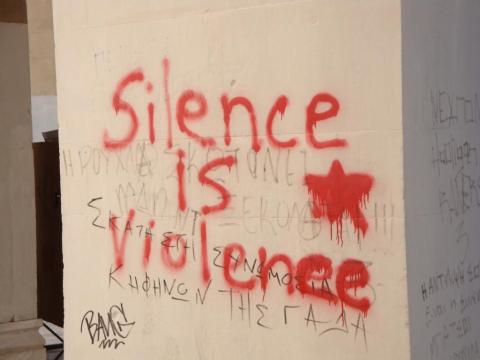 A Baptism of Fire

Anarchists, riots, and a situation much like the one experienced here in Buenos Aires. I was quite young back then, in 2001, to take to the streets. This time, however, I was ready. Against…