This blockbuster exhibition claims to straddle contemporary art and graphics, urban interventions and global youth culture, with work chosen by director Peter Doroshenko and independent curator Pedro Alonso. Three floors of the building and a handful of outdoor venues around Tyneside have since September hosted a bewildering confusion of commissioned graffiti, poster and billboard pieces, massive doodlings and small stylised sketchings, multi-media and found-object sculptures and installations, slick manga-inspired dreamscapes, psychedelic fantasias on canvas and computer-generated cartoons, topped off with a garishly-painted skateboard ramp. To make sense of the apparently random juxtapositions, visitors are helpfully advised that the artists featured, from all around the world, earned their stripes outside the conventional gallery system. ‘So what?’ you might ask. Proximity to official approval may fascinate those who aspire to it, but affords no coherence whatsoever to this ramshackle mish-mash of a show.

Spank the Monkey was inspired by the success of the American travelling exhibition Beautiful Losers: Contemporary Art and Street Culture (2004) in exhaustively detailing the development of forms of visual expression associated with diverse US youth subcultures since the sixties. The often countercultural concerns of their exponents were mapped onto the local contexts in which their activities became differentiated as ‘art’, with varying levels of subsequent incorporation into the mainstream alongside cross-fertilisation with prevailing styles fashionable in conceptualism, installation, film, photography and graphic design. Work by original graffiti art stars Jean-Michel Basquiat and Keith Haring was included (early Haring sketches are also currently showing at the Baltic) alongside hundreds of others (Shepard Fairey, Barry McGee and Ryan McGinness being represented in both shows), but its focus on the social scenes out of which the art emerged lent the project a depth and integrity entirely absent at the Baltic – where ‘art-market versus supermarket’ is the nearest we get to profundity.

So the tame, desultory efforts permitted at Metro stations betray no sign of the tagger’s lawless compulsion to mark alienated space. Inside the gallery, heart and guts are similarly at a premium. At least Faile’s cut-and-paste posters deploying press headlines about the Israel-Hezbollah clash effectively parallel media bombardment when plastered up and down walls, while seeming innocuous when isolated in frames surrounded by white space. Better still, Brazilian duo Os Gemeos’ shack with ski-masked accoutrements mixes shanty deprivation with outlaw soul, whereas Shepard Fairey’s impressive billboards achieve the opposite with his ‘Obey’ range pastiche of Soviet modernism, spinning empty radical chic with the usual heroic suspects – Ché, Mao, Black Panthers, Castro, Subcommandante Marcos, whoever … Whether he’s drawing attention to or celebrating big business authoritarianism while pocketing paychecks from Nike, the implied inevitability of assimilation from underground into mass commercial media is facile and tendentious, dismissing the imaginative and subversive potential of independence, even when a decent living alongside self-determination is sought from design and thematic innovation.

And such potential’s not hard to find – for example, designs by James Cauty (ex-KLF, K-Foundation, anti-Turner Prize pop/art outsider based at the Aquarium, London) are also showing in Newcastle. Exploiting the decidedly low-brow tradition of stamp collecting, the CNPD (Cautese National Postal Disservice) first day covers, prints and books – marketed as low-priced limited editions – comment pointedly on the absurdities of national identity, art and iconography. Past provocations include images of the queen in a gas mask, and burning Houses of Parliament with the legend ‘5/11’; now supplemented with the ‘America Shut Up’ series and the Angel of the North upside down with its head in bedrock, ridiculing the “we’ve never had it so good” cultural triumphalism of the Sage, Baltic et al. Unfortunately, irreverent title aside, Spank the Monkey risks barely a glimmer of such reflexive humility or humour – surely showing the insecurity beneath the arrogance of power which, moreover, so many contemporary urban stencilists and adbusters deliberately expose.

Banksy presumably saw the writing on the wall (so to speak). His sole contribution is an old master-type portrait of some anonymous grandee just after being custard-pied – succinctly puncturing the pretensions of art institutions and patrons, even as he cashes in on the commodity status they sanction. More abject still is Barry McGee’s giant ‘Smash the State’ daubed in red on the opposite wall as a reminder of the energy and anger that can animate autonomous public art when its makers (or curators, for that matter) neither prostitute themselves for government funding nor speculate on niche market cool. Spank the Monkey may bolster the Baltic’s ‘edgy’, ‘relevant’, ‘youf-friendly’ credentials as the end of Lottery support looms, but promoting Sony Playstation and selling rat stencil merchandise to a few skater kids scarcely scratches the surface of the significance of grassroots street-level creative endeavour.

So, domesticated urban graffiti, Mexican tattoos, Japanese polaroid porn, etc, are wrenched from their complex origins – which are ignored, along with the vast majority of producers shunning respectable careers for collective work, self-publishing, artist-led networks and other marginal, occasionally politicised and/or illegal activities. Proposing trendy ‘guerilla marketing’ (any cultural economics not corporate-controlled) as common denominator simply projects the gallery’s own recuperative desire onto an infinitely more variegated and engaged field than the organisers can acknowledge in their haste to kowtow to capital. Ironically, rhetoric about global youth hawking their aesthetics to the highest bidder, while undoubtedly accurate for some, renders most of these exhibits more, not less, unintelligible. Naturally, the far more salient sidestepping of elitist and hierarchical disciplining is anathema to the British contemporary arts establishment (and other cultural industries). No prizes, then, for guessing whose Monkey is really being Spanked.

Spank the Monkey and the Keith Haring exhibition are at the Baltic Centre, South Shore Road, Gateshead until 7th January, followed by G-Word showcasing North-East graffiti artists until the 21st. James Cauty is showing at Electrik Sheep, Pink Lane, Newcastle through December. 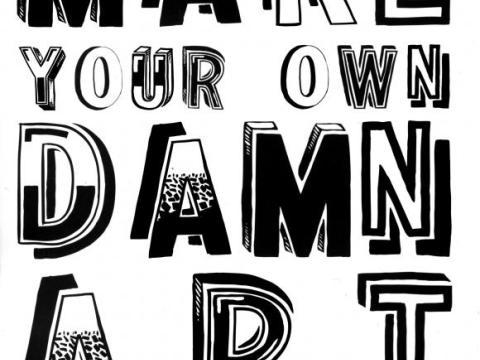 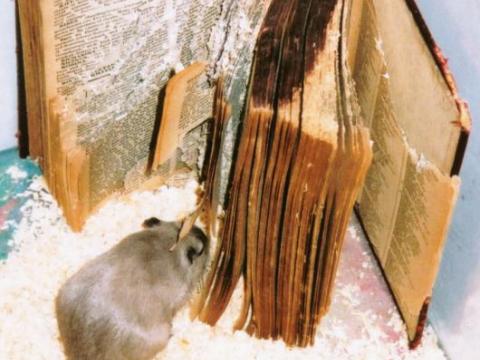 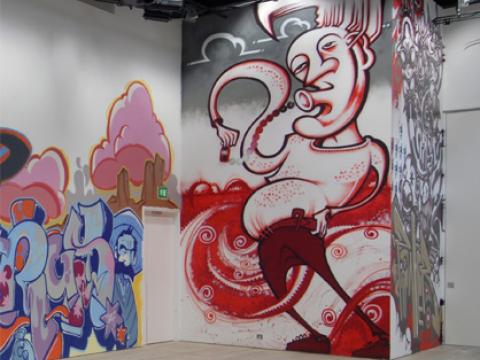