ALAN LOVELL, who organised the season of "Anarchist Cinema" at the National Film Theatre last year and wrote the pamphlet of that name, is film critic of Peace News.

GO AND SEE Oh What a Lovely War IMMEDIATELY. First of all because it is a wonderful evening in the theatre. It has everything; high drama and broad humour, colour, dance, music, attractive girls and a feast of songs, witty, nostalgic, dirty, catchy, ironic. It has one of the funniest moments I have sat through in the theatre when a sergeant drills a squad of raw recruits for minutes on end without saying an intelligible word to them; and it has one of the most moving as a group of soldiers softly sing:

Oh What a Lovely War uses the basic shape of a Pierrot show to create an experience of the First World War. Dressed in a permanent, clown-like uniform, the cast use only odd props like a general's hat, a walking stick, a black shawl for their purposes. This shape gives the show an exhilarating freedom. The Pierrot show evokes the period with its suggestion of the music hall, concert entertainers and sea-side shows. It allows song, dance and straight drama to be mixed together without any clash. The action can range widely; from France to England, from the front line trenches to a London Music Hall. The actors have similar scope; one moment a private soldier, the next a general, one moment Earl Haig's wife, the next a factory worker.

The Pierrot show also provides a critical framework for the commentary on the war the show provides. Unlike most plays you see in the theatre, you are not asked to believe you are witnessing 'real'

life. When an actor changes hats and by doing so stops being a member of the Austro-Hungarian secret police and becomes a British general instead, you can hardly believe that. You are always aware of the ritual the theatre is. The ritual of Oh What a Lovely War parallels the ritual of the war it describes. Soldiers use their uniform in rather the same way an actor uses costume — to become somebody better able to cope with a new situation. Earl Haig as the commander-in-chief of the British forces was acting out an idealised and unreal conception of himself. The nature of the show makes you see war in a new light.

Some of the reviews have suggested that Oh What a Lovely War is no more than a Pierrot show — a mixture of song, dance and story thrown roughly together and given shape by Joan Littlewood's genius. Nothing could be further from the truth. The sequences of the drama spring naturally and directly out of the overall conception. One of the triumphs of the show is that it gives the appearance of a completely free form when it has clearly been carefully worked on.

Three sequences illustrate this care. The first re-tells the story of the meeting of British and German soldiers in No-man's-land at Xmas, 1914. It begins as an almost sentimental interlude with the British soldiers' joking being interrupted by a German soldier singing Holy Night. The British soldiers (after first mistaking the source of the singing as 'those bloody Welshmen in the next trench') respond not with a carol but with a very funny obscene song which the Germans mistake for an English carol. The barriers broken down by this bizarre musical exchange, the meeting in No-man's-land takes place. It is an unsentimental and convincing recreation of the incident.

Near the end of the evening there is a church service. It is done absolutely straight. The actor who plays the priest catches the weary earnestness of the clergyman on the big occasion. The hymns are very familiar ones, including 'Onward Christian Soldiers' and 'What a Friend we have in Jesus'. We immediately recognise and respond to the familiar church service. But our response is contradicted by what is happening inside the familiar ritual. The priest is telling men who will very likely die the next day that the Archbishop of Canterbury has said it is not a sin to help the war effort on Sundays. The words of the hymns are rather different from usual. The first line of 'Onward Christian Soldiers' is 'Forward Joe Soap's army'. The opening verse of 'What a Friend we have in Jesus' is:

When this lousy war is over
No more soldiering for me
I will put my civvy clothes on.
Oh, how happy 1 shall be.

Sung in a very pleasant tenor voice, the hymn sums up the powerful, ironic effect of the whole sequence. You expect the religious pieties and there is the simple human demand. The soldier may have a friend in Jesus but he'd rather take a chance on the war ending.
In the third sequence, three women dressed in black shawls stand talking. They discuss the work they are doing for the war effort.

One remarks on the high wages women can earn in a munitions factory. Another who works in a cotton factory says 'We're doing some funny work at the moment. They say it's for shrouds. I'd rather work on ammunition.' Done is an almost throwaway manner with the actresses grouped in a dim light at the side, upstage, the underemphasis has a haunting, poetic effect.

Oh What a Lovely War is not simply propaganda. It has been accused of caricaturing the officers, of explaining the war in crude class terms. Its attitudes are more complex than this. One scene illustrates the point perfectly. A wounded private, just arriving back in London, sees an officer he recognises and calls to him. The officer turns and says something like 'Hello Higgins. Good to meet you. See you back in the trenches.' As the scene is played it doesn't simply demonstrate the insensitivity of the officer. The private gives the greeting to the officer a slightly winning tone. He is clearly making an emotional demand on the officer. As played by Murray Melvin the officer is a boyish figure, aware of the man's demand but too young to cope with it and so defending himself with a conventional and absurd response to the greeting.

Earl Haig is the dominating figure in the last part of the drama. Though we are made to realise his narrow, obstinate stupidity and insensitivity, he also comes across as a man with his own integrity partly because we hear his actual words, written during the war.

By the end of the evening, the first world war has stopped being a date in a history book. In watching the show you have imaginatively lived through the war. You have been made to face its monumental absurdity — the authentic photographs from the war that are projected onto the screen and the facts flashed in an electric ticker tape at the back of the stage keep reminding you that the war happened. You realise that the men were not the simple heroes of war memorials and armistice day services. They were sceptical about the war, distrustful of their commanders. But they weren't incipient pacifists. A final scene with the French army making a charge baa-ing like lambs frighteningly suggests the way the men continued to respond to the often insane demands of their commanders.

Oh What a Lovely War does not have an original author. Charles Chilton (a BBC producer who has similar things on the radio with songs of the American Civil War) is credited with the idea on which the show is based. In the programme it is described as a Theatre Workshop Group Production. It clearly is. Everybody involved in the show makes an important contribution. The cast is magnificent. Victor Spinetti with his direct humorous control over the show as the Pierrot master; Fanny Carby catching the pleading sincerity of a pacifist agitator; Colin Kemball singing 'When this lousy war is over'; Brian Murphy impersonating a British general trying to contain his senility by a stiff bearing; Ann Beach's cheeky vitality and enthusiasm throughout the show. These caught my eye but other people's list will be different.

Apart from having the original idea, the collection of songs Charles Chilton has made for the show is one of the foundations of its success. Raymond Fletcher, the military adviser, gives it a factual historical framework that stiffens and hardens it. Joan Littlewood's contribution is so important it is impossible to detail. One example must do. A nurse sings 'Keep the Homefires Burning'. The song is deadeningly familiar. The physical movement on the stage and its placing bring the song very much alive. The drama builds to a climax. Haig dominates the proceedings, driving the men on and on. The figures of the dead flash on the ticker tape. There comes a mad scene as the stage is filled with men clearing the trenches of bodies and mud and singing "The bells of hell'. Haig appears at a balcony crazily singing the song as if he were at a mess party. Then the stage darkens, the men disappear and the lone figure of a nurse (Myvanwy Jen) moves slowly, swanlike across it singing 'Keep the Homefires Burning'. In this context a dead song comes to have the force of a Wilfred Owen poem.

At 18.00 yesterday, a group of cultural, temporary workers, students and “Precaires” (workers in precarious or casual labour), penetrated the prestigious Chaillot National Theatre.

ARNOLD WESKER, born in Stepney in 1932, is the author of The Kitchen, Chicken Soup with Barley, Roots, I'm Talking about Jerusalem, and Chips with Everything. He is the prime mover in Centre 42, whose origins and hopes he explains in this extract from a broadcast talk. 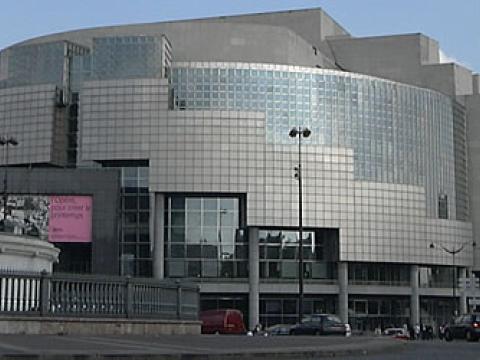 Workers at the Paris Opera have been striking since October 18th in defence of their pension regimes. 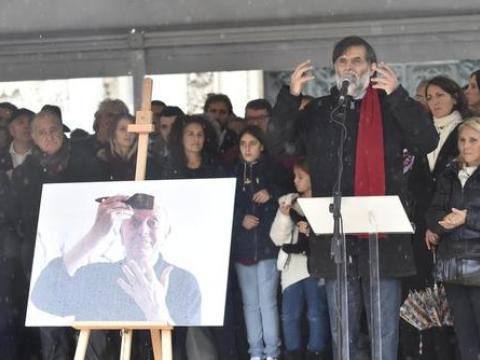