[VIDEO] The Capitalist Propaganda of Multi-Millionaire Andy Puzder: A Response

A response to two propaganda videos by multimillionaire CEO and author Andy Puzder where he argues that capitalism caters to human needs and empowers the masses as a form of economic democracy.

[VIDEO] Tax the Rich? Why More Is Not Enough

A critique of both the conservative and liberal perspectives on taxing the rich. Link: https://youtu.be/SJaoDBJC8M0 PragerU and The Daily Wire misrepresent the facts to exaggerate how much tax the rich pay. However, a large portion of tax revenue is indeed paid by the rich. The argument that liberal progressives make to justify this is: Those who can afford more should pay more. But this accepts the belief that the… 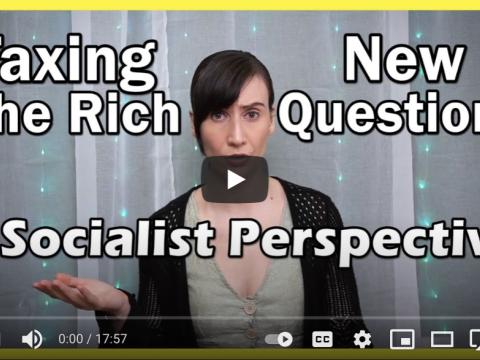 https://youtu.be/5q6j4Kh8LEA • Is it justified that high-salary workers pay a high portion of the tax revenue? If so, what is that justification?…

https://youtu.be/CY4pNGK7ccI Boomers get a lot of hate. The boomer generation is blamed for the awful state of the world, ruining the housing market, job market, and environment. Millennials and Gen Z are framed as their victims. This discourse promotes a confused misunderstanding of power dynamics in capitalism. It stifles class consciousness and diverts attention from the systemic causes of our environmental and…

Meritocracy: a sweet lie we’re told to make capitalism seem fair. But is this lie actually sweet? Is meritocracy something good to strive for, or is it trash? https://youtu.be/ENsrf27uLJg This video will: 1. Discuss how belief in meritocracy is used to manipulate us into supporting a system that’s against our interests 2. Present evidence that meritocracy is a myth 3. Argue that capitalists get rich not by merit…