The arrival of the Roma asylum seekers from the Czech and Slovak republics at the end of last year exposed the racism of New Labour and their collusion with rise of the far right in central Europe. The BNP and NF's attempts to capitalise on this reminded us of another danger. Standing against all this was the response of local people, anarchists, socialists and, mostly, people who wouldn't go near a political meeting. It is, however, clear that the Roma have not stood alone against the state and the fascists in central Europe. Human rights reports note the anti-fascist activity of anarchist groups and, most importantly, the collaboration between Roma and anarchist activists against the fascist groups. The following two articles, one from Solidarita, a Czech libertarian socialist group, and the other from an activist in Dover report from both ends. The conclusions are clear. There is no change under New Labour, the fascists' attempts to match their European allies can be opposed successfully here and support for anti-fascists in the former Eastern Bloc is crucial. Finally, when the Labour government is locking up Roma and bending their own rules in trying to deport them, how do we distinguish between them and the BNP? Food for thought come the local elections.

1. Gipsies are forced to leave the Czech republic because they suffer terrible social and civil discrimination based on their ethnicity. They are not economic refugees! They do not try to abuse hospitality of your country.

2. Gipsies used to lead the life of either nomadic artisans, settled artisans or peasants in the territory of former Czechoslovakia. Their different and independent culture and lifestyle meant they appeared useless to the ruling classes who constantly persecuted and spread racism against them amongst ordinary people. The first Czechoslovak republic was not much better in this respect than the Austro-Hungarian empire. The Nazis tried to exterminate the "gipsy scum" and so several thousand gipsies were murdered in concentration camps with a lot of help from the Czech authorities. The Communist regime did the most for integration of the gipsy community but for its own reasons. Stalinism required a cheap unskilled labour force rather than new technology, to do the work no Czech workers were willing to do. Ghettos were built in industrial centres and gipsies were forced to settle there, to go to work and school. The aim of their schooling was to better fit them for unskilled, cheap labour. Many gipsy children could not speak Czech very well, were not able to catch up with "white" children in their classes and were sent to special schools which ensured that they could not obtain anything better than basic or vocational education. Their culture and history were meant to have been destroyed and in this way a complete assimilation accomplished.

3. The reconstruction of market capitalism in our country meant for Czech gipsies another disaster. Gipsies as unskilled labourers were the first to lose their jobs and new private employers were not interested in them - there was a surplus of skilled white workers, who were ready to work for the wages of unskilled ones. Gipsies were also a despised black minority so it was much easier to sacrifice them than to sack majority white workers. The educational system did not offer Gipsies anything better: Quite the opposite. It is underfunded and even worse than it used to be. So the old discrimination has continued and gipsies are now trapped in a vicious circle of unemployment (70% of their community are unemployed), which leads to a decay of traditional community values and the ghettos consequently sink into crime, drugs, prostitution and desperation. These negative effects of discrimination cause even more xenophobia and rage from the white population. It means they are barred from pubs just because they are gipsies (sound familiar?), they are the targets of frequent attacks by Nazi gangs, they are bullied by the police and bureaucrats, they are afraid to send their children to schools and nurseries.

4. Disastrous summer floods which killed 46 people and left thousands homeless or without their belongings, brought perhaps the worst wave of xenophobia and racism towards Gipsies. It was much easier for the mass media and people to scapegoat a powerless minority for looting, abusing humanitarian aid etc. (most cases were fabricated) than to blame real causes of the misery; the state's inability and unwillingness to help adequately the victims; bureaucrats abusing their power and humanitarian aid; owners of shops overpricing goods; a market system which ditched the old emergency system because it was too expensive and had swapped environmental safeguards for profit. In this atmosphere of hatred a mass emigration started.

5. Politicians of all parties - left and right- have always used gipsies as scapegoats for crime, the housing shortage and cuts in social benefits. In this way they have assisted in creating a xenophobic atmosphere that allowed a rise of racism and of fascist organisations. Members or supporters of these organisations have murdered about 20 gipsies, anti-fascists or foreigners since 1990. Politicians and the state have turned a blind eye to this all the time.

6. Now the British threat of visas for Czech citizens (it would delay our membership of EU and NATO) forced the government to act. They are admitting that there is discrimination and racism in our country, but do not want to admit that the state practises discrimination as well. They are promising to start to resolve the problems of the gipsy communities, but gipsies haven't the slightest reason to believe them. The new solutions could possibly bring equality in access to education and public sector jobs and make it a hit more difficult for the police to bully gipsies and to ignore fascist activities. Nevertheless, it can not secure a right to jobs and decent housing for all, or more community and cultural programmes. It cannot secure that the gipsy minority will not be sacrificed again in the interests of the ruling capitalist class, that it will not be used again to divide working class people and divert them from struggling against real enemies and real problems. It cannot secure real equality and freedom for all - Gipsies and (other) Czechs.

7. Of course emigration is not a solution either, although it forced the government [to make] certain positive concessions. An overwhelming majority of Czech gipsies are so poor that they cannot afford to leave the country so they are starting to fight back. They are not just protesting against fascist violence. They are also demanding better education, jobs, decent housing, and equality. Libertarian Socialists of Solidarita support their struggle. Soldiarita believes Czech workers and youth have to throw away their prejudices and stand firmly side by side with poor gipsies - not with their leading middle class politicians, who are largely corrupted by the current system of social injustice - in their struggle against discrimination and unemployment. We all need jobs, decent wages and housing, free and accessible education, health care, public transport and a healthy environment. We are all deprived of these by the market system. It gives privileges and power to the rich and discriminates against the poor and abuses minorities even further. More and more social layers find themselves at the social bottom. Gipsies were the first, because they were a black minority, easy to sacrifice. White pensioners, young people and workers follow them. SOLIDARITA believes we have to start organising ourselves at our workplaces, in our communities, dole queues and schools to fight the institutions, individuals and the whole system that causes our social deprivation and discrimination. 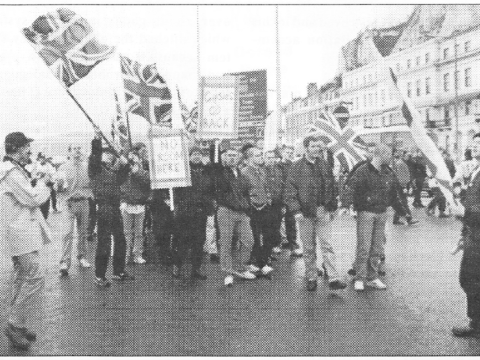