A helicopter monitoring protesters as they approach the security perimeter.

Black Flag article on protests against the G8 summit at Gleneagles in Scotland in 2005.

The G8 was like the United Nations of policing thousands of cops from every British force. And like UN peacekeepers, this was an imposed force that everyone, locals and protesters alike, could have done without. The G8 Legal Support Group provides a vivid picture of the repression we faced in the statement to follow, but more important is the way in which the policing was undermined by determined protesters using flair and imagination.

After the pointlessness of Saturday's white ring round Edinburgh, much of the Make Poverty History crowd left town (or else retreated to celebrity lobbying), clearing the field for those of us who recognise that poverty and capitalism are intrinsically linked and fair trade is an oxymoron.

Monday's action was aimed at the precarious nature of work in the new millennium whilst satirising the left's demands for full employment, but appeared more as a training exercise for both sides. The forces of the state played with their new riot gear and newly assumed draconian powers and the Insurgent Rebel Clown Army played with the forces of the state - their camp marching behind paramilitary ranks of riot cops was a particular joy to behold.

The protest on the following day had already succeeded - Dungavel Detention Centre had been cleared for the week for fear of mass breakout. Not only was this a symbolic victory; such dispersals of jailed asylum seekers are important for the circulation of information within the detention camp system.

Wednesday was always going to be the big day, the opening day of the summit and the arrival of the world's leaders. The direct action camp planned to blockade all roads leading to Gleneagles (and there aren't that many), whilst the left would march on the summit. All the acceptance of different tactics couldn't disguise the contradiction - the left would have to cross the blockades to reach the start of their march. In the end however it worked out better than could be expected.

Although some groups were rounded up before their blockades could begin, all roads were blocked at least for some of the morning. A variety of tactics were used, from the kids’ blockade, to locking on in and under cars to good old fashioned barricades. This may or may not have delayed the start of the summit (there are contradictory reports from a body with scant regard for the truth), but a number of support vehicles were certainly caught up in the traffic chaos that affected the whole of southern Scotland.

The left meanwhile reached Auchterarder, the starting point of the march, as did many clowns, samba bands, black clad anarchos and a sound system. The state had banned the march, but the left was in belligerent mood, threatening to march on the US Consulate instead, Since in central Edinburgh a demonstration was already underway by those prevented from reaching Auchterarder, threatening a repeat of Monday, the state backed down. The high point of the march was the promise that we could pass by the security fence. In reality however this was a fake fence, set a few hundred yards in front of the real one, the void filled with riot cops and horses. It was therefore a surprise to discover that round the next bend the actual fence was just a short run across a barley field. The entry was hesitant at first, but soon about 500 protesters had ignored the demands of the stewards and headed towards the fence. The state, caught off guard, had to fly riot cops in by Chinook military helicopter, but this was too late to prevent the fence from being breached.

The disgusting bombing in London cut across the protests as it did across every other aspect of daily life. Immediate thoughts were for family and friends in London, and the desire for confrontation evaporated. Unfortunately this was clearly a one sided feeling, as the cops broke up small protests as people attempted to express their feelings about the bombings and the complicity of the Labour Government.

The final day saw a small solidarity picket at Edinburgh prison, where male prisoners were being held. Disturbingly, the picket planned for the woman's prison didn't happen. In Glasgow meanwhile there was Boogie on the Bridge, a street party against climate change and the extension of the M74.The changed mood was best summed up by the banner that read "Dance for your sorrow, your anger and your joy". Local support was much in evidence, but unfortunately locals were not at the front when we left the bridge en masse, a fact that contributed to us being penned in on an industrial estate. After hot and frustrating negotiations with the cops, the demonstration proceeded under heavy guard to the Cre8 Community Garden, where permanent opposition to the motorway extension is based.

Given the current climate and the increasing threat to meaningful protest in the UK, that plenty of protests happened was in itself no mean feat and no one can have failed to have grasped the sheer scale of opposition to both the policies and the rationale of the G8. In summary, despite the enormous resources at its disposal, the state did not have it all its own way at Gleneagles.

The entry was hesitant at first, but soon about 500 protesters had ignored the demands of the stewards and headed towards the fence. The state, caught off guard, had to fly riot cops in by Chinook military helicopter, but this was too late to prevent the fence from being breached. 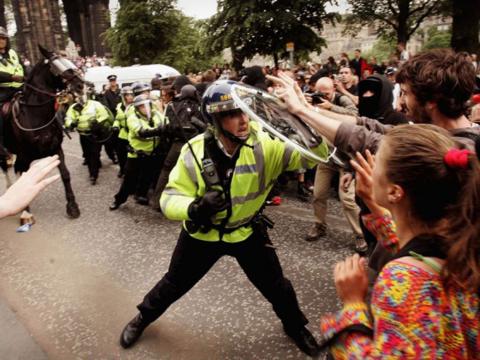 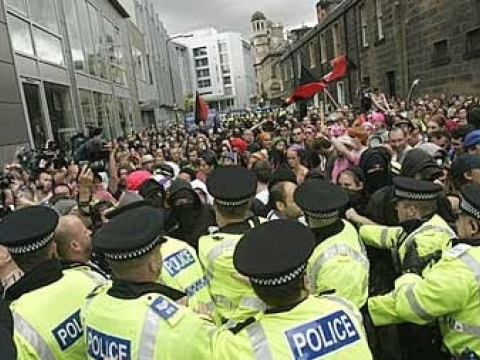 An article challening the tactics of set piece protests against summit meetings of heads of state. … 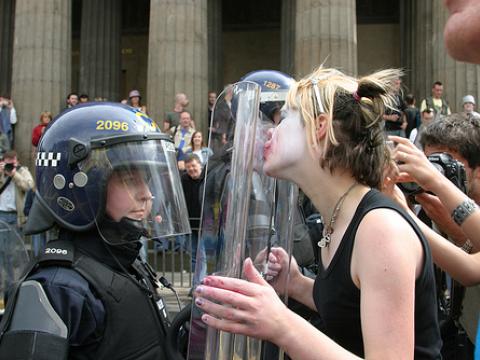 Report from the G8-resistance in Edinburgh, July 2005, by Prol-Position.