For years now the whole Brexit issue has diverted attention from the declining quality of life experienced by the working class in the aftermath of the financial crash. Now we have an election campaign where Labour and the Conservatives are vying to outdo each other as to how much they will increase state spending in order to end austerity. Labour's plans for a kind of soft nationalisation (a sort of John Lewis employee share scheme, “when the market will allow it”) and Boris' gob shite about the NHS (as the break-up continues) are not going to alter the fact that the working class is paying for capitalism's crisis.

One of the consequences of the biggest financial crash in capitalism's history was a leap in unemployment. More than a decade on we are told that unemployment is lower than it's been for decades. Hardly surprising, given the obstacles put in the path of anyone trying to claim Universal Credit or Job Seekers’ Allowance. Anyone who can stand up (and some who can't) is now classed as fit for work and being classified as 'employed' doesn't necessarily mean that the work you do pays enough to live on.

The real situation of the working class tells a different story. On top of all the benefit cuts the whole range of government services and amenities have been abolished or pared down. From libraries to bus services, to reduced funding for schools and house building programmes, and of course the NHS. Inadequate funding has pushed areas of public health and education to the brink of collapse. The number of food banks is increasing, the shortage of “affordable housing” will remain and reports of hidden and not-so-hidden homelessness will continue.

So, when we are told that more people than ever are “in work”, that Labour, Tory or whoever are ready to 'turn the country around' back to the good old days when there was a bright future for themselves and their kids we have every reason to be sceptical. Above all, we don't believe any of the political parties' claims to have the formula for a better life because we know that today's world is the outcome of decades of capitalist crisis: a crisis which will not go away. This is what we have to face up to as a class. More and more precarious, low-paid work; where the prospect of a decent pension is diminishing by the day and more and more pension-age people have to keep on working; where nominal wages have barely reached the level they were a decade ago (though inflation has not gone away); where life without resorting to the credit card and/or loan sharks is unthinkable for many. If you want a reliable statistic, check out the United Nations facts and figures — 60% of people “in poverty” in Britain are from working families, including 2.8 million in a family with a full-time worker.

Everyone knows that the gap between the rich and everyone else is now a chasm. However the ONS (Office for National Statistics) added insult to injury when it announced in March that it has been miscalculating “the very highest incomes in the country”. In fact “top earners (sic) incomes are twice as high” as previously portrayed and, what do you know, “This means income inequality is higher than thought”. In fact, the ONS admits, “even using the current method, top incomes grew sharply in 2018 while incomes for the poorest fifth fell”. (Financial Times, 4.3.19). Even the Financial Times is getting worried about the gross unfairness of it and has launched its own campaign for capitalism to become responsible! But a tiny increase in the top bracket of the income tax is not going to change that.

Hardship is Worldwide — Class Resistance Must Be Global

In any case, the answer to a worldwide capitalist crisis is not to dream of a better capitalism, a more egalitarian capitalism, a capitalism without 'elites'. As we write this, anti-establishment protest movements against the deteriorating quality of life are going on across the world but they are not demanding an end to the real cause of our misery — the capitalist system. For more and more people everyday life is a constant struggle to stay clothed, housed and fed. The local states prop up the capitalist system that generates this living hell. Many of our class sisters and brothers are forced to flee as refugees, risking their lives to seek any sort of hope for the future.

This picture is not changing for the better. We are not living in the post-war boom period of the 1950s and 60s. For decades now global capitalism has been grappling with its inevitable crisis of falling profit rates in the ‘real economy’ and turning more and more to financial speculation. The 2007-8 banking crash was the inevitable consequence. But the ‘solution’ to the crash — dole out billions of pretend-dollars, pounds and euros to the banks — has only postponed the next crash and made the capitalist debt mountain even higher.

Put simply, capitalism is unsustainable. It has no future to offer the working class anywhere. It is time to organise the resistance.

The above article is taken from the current edition (No. 49) of Aurora, bulletin of the Communist Workers’ Organisation.

...we don't believe any of the political parties' claims to have the formula for a better life because we know that today's world is the outcome of decades of capitalist crisis: a crisis which will not go away. 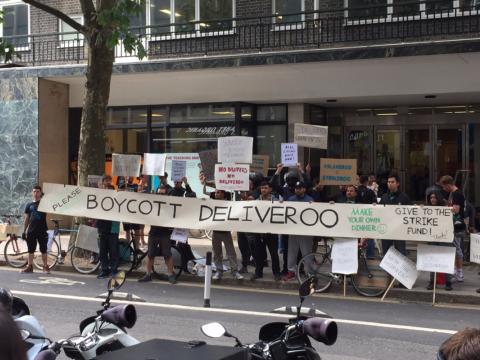 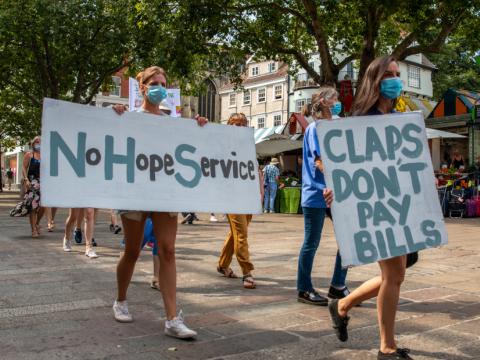 As we noted in our last issue, a pandemic is as good as any event to demonstrate the efficacy, or not, of a social system. This one has generally…