In 2003 the Zapatista movement of indigenous people in Chiapas, Mexico initiated some important new developments in the self-management of their 1,000 autonomous communities.

5,000 Zapatistas and thousands of supporters gathered in Oventik, Chiapas on the 8-9-10 August 2003 to celebrate a major step forward in the Zapatista's struggle for autonomy. The previous few weeks saw the rebels issue several communiques of major importance,

"It is possible to govern and to govern ourselves without the parasite that calls itself government."

Following the gutting of the Indigenous Law on Rights and Culture,

"the EZLN has decided to completely suspend any contact with the Mexican and government and the political parties, and the Zapatista peoples have reaffirmed that resistance is their primary means of struggle", declared a Zapatista communiqué. (www.indymedia.org.uk/en/2003/07/274932.html).
”Now is the time to put the autonomy, of the indigenous peoples into practice and to act on it throughout the entire country of Mexico. No one needs to ask permission to form their autonomous municipalities," declared Comandante Esther. "in the same way”, she continued, "we are inviting all indigenous Mexican women to organise themselves so that, together we can exercise autonomy and practise our rights which we deserve as women.”

The August event inaugurated five assemblies of 'good government' in Zapatista rebel territory, bringing an end to the five 'Aguascalientes', set up between 1994 and 1996.

"You are in autonomous rebel Zapatista territory; here the people govern, and the government obeys," read a sign al the entrance to the Caracol of Oventik.

A festive atmosphere prevailed, with the speeches by the Commandantes of the EZLN's General Command, and the introductions of the Autonomous Councils, interspersed with basketball tournaments and dancing late into the night. Delegates from each of the 30 Zapatista autonomous municipalities will comprise the five assemblies of 'good government' situated where the five 'Aguascalientes' used to be. Following the uprising in 1994 the Zapatistas have created their own systems of grassroots democracy, autonomous education, health care, justice, and production. In opposition to the Mexican government's 'Plan Puebla Panama', the Zapatistas have called for the implementation of the people's 'Plan La Realidad Tijuana':

"The Plan involves linking all the resistances in our country and, along with them, rebuilding the Mexican nation from below"

"AGAINST THE POWER OF MONEY"

The Zapatistas have declared their support at the world level for Venezuelan sovereignty, for the people of Iraq and for all those struggles in resistance against the power of money. The communique of July 19, 2003 declared:

“To the People of To the Peoples of the World: Brothers and Sisters: This is our word: FIRST - The globalization of power has demonstrated throughout the world that it has entered its most aggressive stage by making military war its primary weapon of domination. Nonetheless, the attack against the people of Iraq not only bore witness to globalization's true destructive nature, but it also provoked the greatest worldwide condemnation. in the history of humanity. Despite the fallen statues, worldwide resistance and rebellion have been maintained and are growing. The Zapatista rebellion is just one small part of the great demonstration of human dignity throughout the planet..."

Comandanta Esther-'s speech at Oventik in August struck a powerful blow for women's autonomy, in a traditionally patriarchal culture.

”It is no longer the moment to be silent or to humiliate ourselves in front of men. nor to ask them for the favour of respecting us. Now is the moment for acting on our own and for making men respect our rights. Because, if we do not do so, no one is going to do it for us. It is up to us now, men and women, to act and to carry on, in order to build our autonomy and to move it forward,"

One of the most fascinating of the recent Zapatista communiques was that by Marcos entitled "CHIAPAS: The Thirteenth Stele Part Five: A History" (www.indynriedia.org/uk/en/2003/08/275062.html ) This communique describes the operations of the Zapatista grassroots democracy, autonomous health and education services and other activities of the autonomous municipalities, such as questions of justice.

"The history of the rebel Zapatista Autonomous Municipalities is relatively young, at is seven years old. going on eight. Although they were declared at the time the December 1994 siege was broken, the rebel Zapatista Autonomous Municipalities (the MAREZ) still took a while to become reality. Today, the exercise of indigenous autonomy is a reality in Zapatista lands, and we are proud to say that it has been led by the communities themselves.
What I mean by this is that the EZLN's structure in some way "contaminated" a tradition of democracy and self-governance. The EZLN was, in a manner of speaking, one of the "undemocratic" elements in a relationship of direct community democracy (another anti-democratic element is the Church, but that's a matter for another paper). When The Autonomous Municipalities began operating, self-governance did not move just from the local to the regional, it also emerged (always tendentially) from the "shadow" of the military structure. The EZLN does not intervene at all in the designation or removal of autonomous authorities, and it has limited itself to only pointing out that, given that the EZLN, by principle, is not fighting for the taking of power, none of the military command or members of the Clandestine Revolutionary Indigenous Committee can occupy a position of authority in the community or in the Autonomous Municipalities. Those who decide to participate in the autonomous governments must definitively resign from their organizational position within the EZLN."

"In order to see to it that, in rebel Zapatista lands, governing is governing by obeying, the 'Good Government Assemblies” will be, formed on August 9, 2003. They shall be seated in the 'Caracoles,' with one assembly for each rebel region, and will be formed by one or two delegates from each one of the Autonomous Councils of that region. The following will continue to be the exclusive government functions of the Rebel Zapatista Autonomous Municipalities: the provision of justice; community health; education; housing; land; work; food commerce; information and culture, and local movement...Perhaps a new world is being built…”

While naturally anarchists and libertarian communists balk at the term "government", whether ‘good' or 'bad', we need to look beyond the superficiality of the words used. It is arguable that the Zapatista concept of "governing by obeying", and their practice of "consultas" whereby major decisions are referred back to the grassroots village level for the final decision, are in practice very similar to the concepts of "recallable mandated delegates" and "the administration of things" which anarchists and libertarian communists have long urged. Of course, as Marcos himself admits, the Zapatista autonomous communities are no utopia, and elements of bureaucracy and hierarchy exist, but from what we know the tendency is towards more power residing in the hands of the indigenous peasant peoples at local level.

"And these have been our words, and what.follows is dancing and struggling. Viva world resistance! Viva world rebellion! Viva the poor peoples of the world!”

"And these have been our words, and what follows is dancing and struggling. Viva world resistance! Viva world rebellion! Viva the poor peoples of the world!”

A variation of this Paper, originally prepared for the conference on "Globalization from Below" at Duke in February 1998, presented to the INET'98 Conference in Geneva in July 1998.
Image 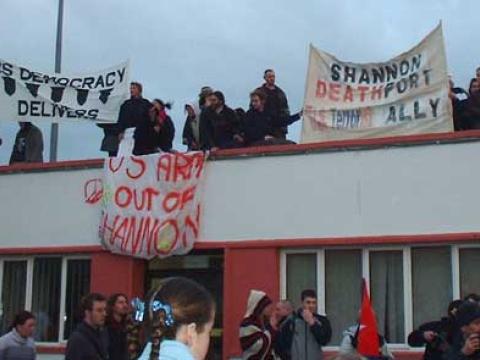 Direct Action against War - the battle for Shannon Airbase

All over the world millions of people have mobilised against the war in Iraq. These mobilisations…