ON Thursday, April 11 the day before Aldermaston '63, copies of the original 'Spies for Peace' pamphlet were received by the national press, southern regional papers, top security men, assorted politicians, prominent members of the anti-war movement, and others. Among these 'others' were a large number of Aldermaston marchers.

On the first day of the March, Friday 12th (I'll bet David Stratton thought it was Friday 13th) the pamphlets were widely distributed by the marchers themselves. They were well received everywhere. The State, on the other hand, didn't take it quite so well. Falcon Field and its environs were crawling with plain-clothes dicks of the rain-coated, beady-eyed, seedy, 'inconspicuous-in-a-crowd' variety1. In fact there were enough of them to form their own contingent on the march — you know the sort of thing, 'H-Bombs: No! Rhino-whips: Si!' There was however no truth in the rumour that they were circulating a leaflet entitled 'Police for Peace'. By Friday afternoon these busy little b's had made their first seizures of the pamphlet. They had begun questioning people, which process was to be repeated again many times the evening in Reading. No change.

Immediately before the scheduled lunch-break on Saturday morning the march was due to pass that little lane that leads off the A4 to RSG 6. This made a detour and demonstration at the rat-hole a very simple matter. By this time a large number of people had already decided to do just that. Leaflets were duplicated by Committee of 100 supporters urging marchers to make the detour and demonstrate. These were distributed all Saturday morning. The news was also spread far and wide by word of mouth. Militants also used Saturday morning to assemble in one particular section of the march, using the Anarchist and Committee of 100 banners as focal points.

As one might well imagine, the Duff-Collins clique being Establishment orientated, were by this time terribly upset by the whole affair. They were doing their utmost to prevent any sort of demonstration. On the Friday night and on the Saturday morning individuals had attempted to chalk mark or paint 'that turning off the A4'. They had been interfered with by the police. But not to worry — when we reached 'that turning' there was no mistaking it. On the one hand stood the red and black flag of the old London Anarchist Group and a silent Committee of 100 supporter holding up a placard pointing the way. On the other hand stood the vociferous Duff bawling into the microphone of a CND van. The gist of her patter was on the lines of 'Keep moving, marchers … On to your lunch break … NO FOOD DOWN THERE, MARCHERS … Carry on to your lunch break … No diversions, marchers … Keep moving'. "Anarchists" could turn left if they wanted, but "marchers" were to carry on. She screamed at Committee of 100 people that they were not to "muscle in on our march". However, to her horror, the militant section of marchers were more interested in unilateralism than in being fed and watered. Instead of trotting on along the A4, they turned sharp left. We should remember this little episode when Peggy Duff says that "the Executive Committee of CND had welcomed the revelations of the Spies for Peace''.2

The lane up to RSG 6 is a narrow winding one. It was soon packed with marchers, many of them by now singing the 'Official Secrets' song. Half-way up the lane, just in case anyone thought he had taken the wrong turning, someone had painted 'RSG 6' and an arrow on the road, in white letters six-foot high. Contrary to press reports there was no police cordon across the lane or anything like that.

When we arrived at the gate of RSG 6 we found that it was guarded by a contingent of the Berkshire Constabulary. This gate, although it possessed a gate-keeper, did not possess a fence. The area was immediately surrounded by demonstrators who then infiltrated through the trees and bushes. Within minutes the whole installation was swamped by demonstrators. The constables made a few abortive attempts to prevent demonstrators from entering the area. But, let's face it, all that Fenimore Cooper stuff just isn't their métier. The police then contented themselves with manhandling some demonstrators behind the boiler-house. When other demonstrators called for cameras they soon eased up on the rough-stuff.

A group of police stationed themselves at the entrance of the bunker — most of them apparently quite unaware of what they were so keenly guarding. Some time later police reinforcements arrived from Reading, including the Chief Constable of Berkshire. But they needn't have bothered because they were falling over backwards to avoid arresting anybody. At one point a police-woman asked demonstrators not to make a noise because it would frighten the one police dog present. This was after the dogs' handler had already set the animal on one demonstrator. In fact all the violence on the demonstration came from the expected quarter: the police.

Demonstrators remained non-violent throughout. After a two-minute silence had been observed (for the State?) the majority of demonstrators left the site to rejoin the main march. They had exposed the funk-bunker in very definite terms. A handful of anarchists and Committee of 100 supporters remained behind until about 7 p.m., when they were thrown right off the site by the police.
The Spies for Peace could scarcely have chosen a better time or a better place for the publication of their first secret. Total damage to the State resulting from this demonstration:
Damage to State property: £2
Damage to State's image (already pretty fly-blown): immeasurable.

1.That is to say, inconspicuous in a crowd comprised entirely of other plain-clothes dicks.
2. Guardian, May 16. 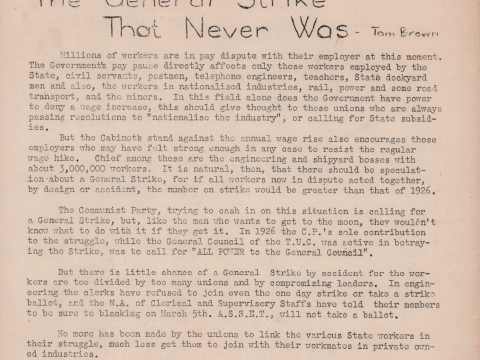 Volume 2, Issue 3 of Direct Action, with articles on calls for a general strike against a wage freeze, Guyana's supposedly anticolonial rulers… 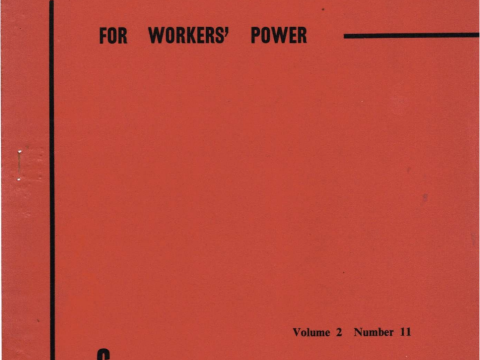 Eleventh issue of Solidarity for workers' power with articles on the lastest in the CND and at Fords, the Committee of 100, hitchhiking in the US…