ALDERMASTON '63 caught the CND leadership in a weak position. Steps Towards Peace had not been well received and administrative action had been threatened against certain groups. The gap between the leadership and the rank and file had been steadily widening.

On Good Friday it looked as if the CND were going to get the quiet, orderly, dignified march it wanted. The Canon held a big press conference. He talked about how his march was going to put unparalleled pressure on the government … by means of a petition to the Queen. And then the RSG bomb exploded. Without as much as a 'by your leave' from the Executive Committee.

Anthony Greenwood made it clear in the Times1 that 'We would not condone actions of this kind'. Mrs. Diana Collins 'did not take it very seriously'. She was 'rather amused by it all'. The Canon stressed again and again that 'it had nothing to do with CND'.1 Top CND marshals tried to pass it off as a 'joke', 'a tissue of lies', or 'just another Committee of 100 stunt'.

But the CND leadership was by no means united. Sanity published extracts of the secret document, together with favourable editorial comment. The leadership reacted fast. They first cut out the forbidden words, then tried to stop the distribution of the whole paper. Thousands of copies of Easter Monday's Sanity, were never sold, not for lack of willing sellers, but because further distribution of 'diversionary' views was thought undesirable.

On the Saturday morning the leadership realized that marchers might actually leave the carefully pre-ordained route and pay a passing visit to Warren Row. Frantic efforts were made to prevent the 'diversion'. Loudspeaker vans went up and down the march, warning marchers of the deviationists. We have already referred to Peggy Duff's activities at the turn-off to Warren Row.

After the demonstration, Canon Collins duly expressed his regret. 'It cannot help our cause'. An anonymous 'CND spokesman' summed up to the Sunday Times: 'The march has been much jollier and more
lively … more music, more singing, less slogan shouting … The marshalling arrangements have been more efficient'. The RSG 6 demonstration never really happened.

On Sunday things were quieter. The Labour Left, the union bureaucrats and the priest king were busy preparing their speeches for Hyde Park. Magna Carta was presented at Windsor and a delegation actually spoke to a member of the Household Staff. Naturally tired after their exertions the Executive Committee drove up to their hotel. They found time however to condemn the 'March must Decide' group as a disruptive influence. The Daily Telegraph was told they might 'have to consider dispersing the march and abandoning the final rally'. Rumour had it that after a visit from the police Collins considered enrolling CND marshals as special constables, with powers of arrest. Their nightmares were doubtless soothed by Fenner Brockway who accused the 'Spies' of providing targets for a nuclear attack. 'It has not done our movement much good', he pontificated from Frankfurt.

On Monday morning an extraordinary pronunciamento was issued in leaflet form. It was signed by 'John Horner, Chairman, Aldermaston March Committee; Ritchie Calder, Vice-Chairman of CND (for the Executive Committee); and Norman Frith, Chief Marshal (for the marshals)'. It was the reply of the CND bureaucracy to police fears of disorder and to canonical fears of disobedience. 'By decision of CND's annual conference' the leaflet stated, 'and in full consultation with CND regions and groups, this march has decided. On that basis people have been called on to join the March. On Easter Monday tens of thousands of supporters will respond to this call to join an orderly, self-disciplined march. We are confident that marchers … will co-operate as we have asked … avoiding any distractions and diversions. We believe that marchers want this Easter Monday march to be the greatest demonstration of completely united protest against nuclear weapons that London has ever seen'.

Little did the CND leadership realise that at that very moment 'Spies' and 'traitors' from every CND region and group were busy duplicating the revelations and distributing them to people along the march, in the most revolutionary act ever undertaken by the movement.

After lunch on Monday despite frantic changes in the order of contingents, and despite careful combined control by police and CND marshals, a couple of thousand people surged out all over the road, twenty or more abreast. George Clark was ignored at Hyde Park Corner when he urged marchers to proceed in fives (he had been asking for threes in the morning). CND marshals with armbands were allowed through police cordons, if they promised to try and regain control. Peggy Duff later2 described the scene in Trafalgar Square. After the 'motley, shouting band of shufflers' had left, the next contingent came 'into the suddenly silent square. They were orderly, quiet, restrained' and 'beautiful to see'. 'That' she said 'was the real Aldermaston'.

In Hyde Park the leaders gathered for the final rally. Michael Foot accused the 'Spies' of distracting attention from the real purpose of the March, (a march … is a march … is a march … etc.). He orated about 'this great democratic movement' which should continue to act democratically. Does this mean voting for Mr. Foot and his like once every five years … and in the meantime assiduously attending Labour Party ward meetings? He referred obscurely to those who sought to 'achieve the highest purposes by the lowest methods'. John Homer, of the Fire Brigades Union, agreed. He informed us that the Pope was on our side. 'A great democratic pope, quiet, orderly, restrained, and beautiful to see', you could almost hear Peggy Duff mutter to herself.

Later Peggy Duff told the Guardian3 that the 'Spies' pamphlet had not made much difference to the march one way or the other. 'It has probably affected the amount of publicity but that can't be helped'. She would doubtless have preferred less publicity. Perhaps a picture or two on the back page depicting the 'thoughtful pilgrimage of thousands'.

The March was over. The leadership reconsidered its position. It realised that hardly a member of 'their' movement did not support the 'Spies', and was not either reprinting or distributing secrets as fast as they were being revealed. The Daily Telegraph4 advised the Canon 'to discipline or expel his followers, or resign himself'. Much as he might have liked to do so, he was bowing to the biggest storm the leadership had yet faced. It was decided to hold a public meeting to erase the unfortunate image of Easter weekend.
On April 28, a most successful meeting was held in London. Some 400 people crammed the Mahatma Gandhi Hall. Michael Craft, Chairman of London Region CND said the purpose of the meeting was to express support for the 'Spies for Peace' and show solidarity with them. Speaker after speaker congratulated the 'Spies' and pledged support and solidarity. Messages were read from Bertrand Russell, Ben Levy and Robert Bolt. Canon Collins and Peggy Duff were flayed for their equivocations. Sidney Silverman said that the government were the traitors and that the 'Spies' had 'had done what the government should have done long ago … They are finding out the truth, legally or illegally, and revealing it to the people'.5
Peace News6 spoke of 'the blatant discrepancy between the CND leadership and the feeling of the meeting'. According to the Guardian7 it had been reported that the 'Spies' would use the occasion to make themselves known. There was a strong representation from Fleet Street to record the event. It is understood that the police were present as well, ready to conduct the necessary formalities. But the 'Spies' if they were there, did not announce the fact'.

We are glad they didn't. If these 'Spies' are supporters of CND their failure to 'own up' reflects the development of a new temper. Their success in eluding the authorities is itself becoming an important factor in the situation. It is showing what can be done by a few people against the whole bureaucratic might of the State. It is helping the movement against nuclear weapons pass over to the offensive. It is laying the foundations of a genuine resistance.

The last word goes to Peggy Duff. In a letter to the Guardian of May 16, a month after the demonstration at RSG 6, she said: 'The Executive Committee of CND had welcomed the revelations of the "Spies for Peace" concerning RSGs and the results of Fallex '62 because we felt that people were entitled to know, but we had reservations about the juvenile style and approach of some of the documents circulated'. So now you know. When Peg screamed at 'anarchists'. on the A4, on Easter Saturday, she was 'welcoming' their revelations. When Michael Foot whined about diversionary activities, he too was expressing his solidarity. When Anthony Greenwood said he 'wouldn't condone such action' he was actually expressing support. In fact, they had been supporting the 'Spies' all along! Within a few months, Collins will doubtless be claiming that every 'Spies' pamphlet went out with the Carthusian Street imprimatur!

Non-Violence as a Reading of History 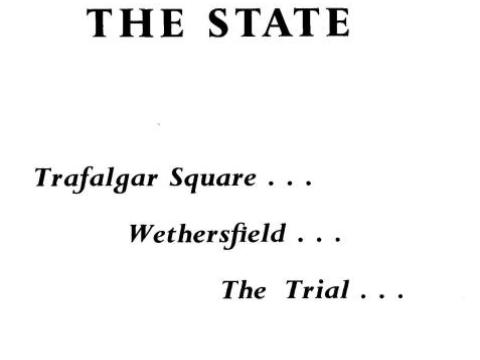