This pamphlet appeared recently with the expressed aim of being read by 'people interested in animal liberation who want to consider why animal exploitation exists, as well as how', and 'by those who define themselves as anarchists or communists who either dismiss animal liberation altogether or personally sympathise with it but don't see how it relates to their broader political stance'. Its overall argument is that animal and human exploitation are intrinsically related, and that the fight for communism is inseparable to the struggle against animal exploitation.

More particularly, the author identifies that there exists a striking commonality between the exploitation of humans and animals, and this is traced back to capital's domination over our lives and its subordination of every human or animal need to the needs of valorisation. The author thus says at some point: "...with animals and with humans, the factory system aims to restrict the movement of the body to maximise profit", or, further on, "....[both animals and humans are treated as] an inert, unthinking object, whose creative, bodily, emotional needs are ignored...".

Furthermore, the practice of mass extermination is linked to the treatment of 'unproductive' and 'redundant' (from capital's point of view) humans and animals. Vivisection, this disgusting element of advanced capitalism, is openly linked to particular interests of capital, whereas medical research (whether it uses animals for experiments or not) is exposed for what it really is: a profit-oriented business which "...would rather let people die than allow their patented products to be made available on a non-profit basis".

Moreover, animal exploitation is shown to be interrelated to capital's projection of itself through commodity fetishism. The fact that animals are only seen as commodities with a 'natural' exchange value attached to them, instead of living organisms (in the same way that humans are seen as such) is stressed, as well as the way in which capital's marketing practices manage to conceal this ("...pork not pig, beef not cow").

Coming to the analysis of political struggles, certain aspects of animal liberation are strongly criticised. The practice of boycotting particular companies for their part in animal exploitation is correctly discredited as a misleading view which ignores the totality of capitalism, while the disgusting practice of attacking workers in animal factories as equally responsible for the maltreatment of animals is shown to be a fucked up practice which shows a "...lack of understanding of the dynamics of present day society, of a class analysis...".

Finally, the author is quick to renounce any notion of 'animal rights' in the same way that 'human rights' are attacked as a capitalist construction aimed at disguising existing inequalities and exploitation, and as an institutional construction for the facilitation of capital's domination.

However, despite these valid points the article encounters a number of problems when trying to argue that "...the development and maintenance of capitalism as a system that exploits humans is in some ways dependent upon the abuse of animals."

In tracing the history of animal exploitation, the author makes the remark that in primitive societies, humans were initially vegetarian, thus trying to assert that there is something natural about choosing this sort of diet. Yet, he fails to recognise that in these primitive societies most habits were determined by necessity and not by a conscious and moralistic choice. A totally unjustified glorification of primitive societies follows from this approach, resulting in the author saying that "...[primitive] communities typically live in a harmonious relationship with their environment; it is their home and their provider and it is not their interest to destroy it, by for instance, exterminating animal species". Again, the author mistakenly glorifies the primitive community by presenting only one aspect of it and ignoring that this 'harmonious' relationship was also dangerous, limited and dictated by a kind of necessity which we have nothing to be jealous for. The wild characteristics of animals of that period, which the author addresses in a positive way, also resulted in the constant fear of humans of being consumed by them, and was also partially responsible for people's choice to 'domesticate' themselves and the animals. Moreover, to claim that people's harmonious relationship with their environment led them to refrain from destroying it implies that 'people' (in general) today have an interest in destroying the environment, an attitude which comes in contradiction with the way in which the author later on links the destruction of the environment with the class nature of society and not with 'people's' attitude in general.

At another point, the author quotes Cammate who argues that "...out of the 'animal husbandry' grew both the notion of property ad exchange value', a view which wrongly implies that exchange value (i.e. the mode of appearance of things produced as commodities) existed long before production was generalised commodity-production.

It becomes increasingly apparent that, in analysing the origins of animal abuse, the author exaggerates its development and argues things like "From the earliest stages of domestication meat consumption was the conspicuous display of dominant ruling power" (our emphasis), thus implying that even today, the same social status is given to meat-eating. Moreover, this exaggeration reaches ridiculous levels, when the author implies that even the practice of war between humans was only made possible because of the domestication of animals and the attachment of value to their ownership. The fact that conflicts over things of value was the origin of war between humans is clearly irrelevant of what exactly these things were.

This reversal of subject and object is further committed by the author, when he argues that primitive accumulation primarily dependent on the animal industry, in the sense that peasants were driven off from their land in order to make room for sheep. Although primitive accumulation was generated through the exclusion of peasants from the land, to argue that the animal industry was its primal motor only results in mystifying the origin of capitalism. Sheep were only an expression of capital's development and not its underlying motor. The author exacerbates the argument when claiming that "the animal industry was the starting motor of primitive accumulation, without which the subsequent gains for the ruling class (the creation of a proletariat, access to mineral wealth, etc) may not have been accomplished". The fact that sheep happened to be vital for primitive accumulation in its starting points does not imply in any way that capitalism would not have developed if animals were not regarded as commodities.

Coming to a more contemporary analysis of capitalist social relations, the author states that "...the development of the factory for humans in the modern period was influenced by [the] long history of factory farming", and that "...the origins of the assembly line production are to be found in the US beef packing yards of the late 19th century". To say that the assembly line production process started in one part of industry and later influenced others because of its effectiveness in innovating capitalist production, again says nothing about the actual product of this industry. And although it may be the case that "...Henry Ford acknowledged that the idea for the automobile assembly line 'came in a general way from the overhead trolley that the Chicago packers used in dressing beef'...", this is irrelevant. The fact that the first industry to use assembly-line organisation of labour was animal-related does not mean that it could not have been another industry. There is nothing inherent in the animal industry which makes it the cutting edge of technological/exploitative innovations in the factory system, and thus the link between the development of the factory system and animal abuse seems, to say the least, highly coincidental.

In his examination of the animal liberation movement, the author argues that there is something inherently subversive in its practice, something which is initially based on the fact that "...given that we have argued for the centrality of animals to capitalism, a movement challenging the position of animals could hardly help but impact on capital". However, if that centrality is challenged, the argument collapses.

In a way it is right to argue that "...saving [the] animals from suffering and an early death directly confronts the logic of capital, abolishing their status as products, commodities and raw materials by reinstating them as living beings outside of the system of production and exchange". From another standpoint though, the same argument could be made for shoplifting, which, in a similar way abolishes the exchange value of commodities, and reinstates (in a sense) their use-value. Yet, it would hardly be plausible to argue that capitalism is threatened by it. However positive shoplifting is, it essentially expresses a need for 'free consumption' of the existing commodities, and not a subversive relation to a system of commodity production. The re-appropriation of some commodities does not necessarily imply a starting point for a generalised critique of capital in its totality, and saving some animals from a lab is no more a pathway to revolutionary consciousness than a variety of other situations, which might even occur in meat-eating environments.

Following the general argument that humans and animals are equally mistreated by capital, and that the exploitation of the former is interrelated to that of the latter since both are considered as commodities, no obvious connection is made between the struggle of proletarians against capital and the struggle for the liberation of animals. Nobody would deny that animals are treated in despicable ways, and that this stems from them being seen as commodities. But this does not convincingly result in equating the struggle for the liberation of animals with the movement of communism. (1) In other words, although it is indeed shown that generalised animal abuse is as much a result of capitalist social relations, reading the pamphlet did not result in realising the inseparability between the struggle for communism and that of animal exploitation. It merely re-asserted the fact that animals are as much commodified as humans.

Communism is in fact the reconciliation of man and nature, and the end of the domination of one by another. Yet, the arguments brought forward in Beasts of Burden never manage to confront the inherent moralism of the animal liberation ideology, regardless of whether it can be shown that animal abuse is historically constituted.

At times when revolutionary practice is strikingly absent from our everyday life, when the movement that abolishes existing conditions appears to be in (temporary) retreat, and when the animal liberation movement attracts more people than struggles against capital per se, the pamphlet seems misplaced. Unless, that is, it convinces activists of animal liberation to reconsider the class character of animal abuse and to direct their attacks towards the society which gives birth to such practices and not merely one if its appearances.

-------------------
(1) At some point in the pamphlet, the author argues that "...Marxist political economy adopted the enlightened project of the domination of nature in its entirety with the natural world being perceived as an unlimited raw material for industrial progress", but with the development of capitalism and the ongoing destruction of the ecological system, "...some communists have begun to criticise this model". In fact, communists criticised and fought against this Stalinist model which identified revolution with the development of the productive forces and industrialism long before the destruction of the environment became the starting point of such a critique, and even for Marx communism "...as fully developed naturalism, equals humanism, and as fully developed humanism equals naturalism..."(Early Writings). 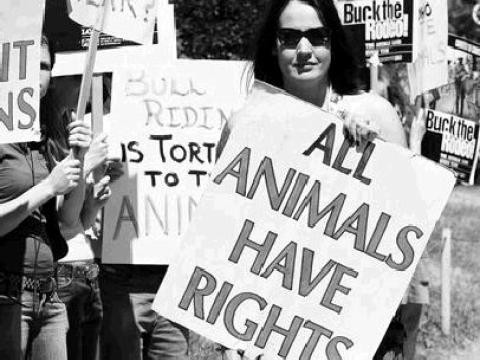 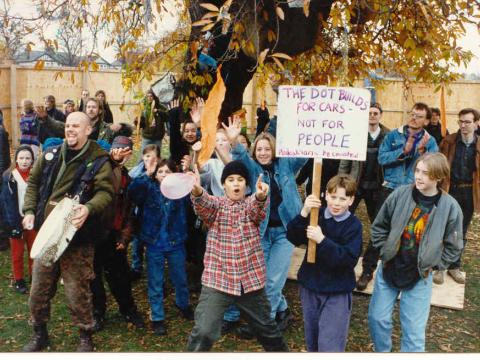 Aufheben article from 1994 about the anti-roads movement, its possibilities and its…