The Paris Commune of 1871
undercurrent #6

Recently, the Sussex University library dedicated part of its space for a small exhibition on the Paris Commune. At first this came with some surprise: how was it that, in the midst of the boredom of academic life and the total lack of interest in any issues of importance, the library was willing to commemorate one of the most crucial proletarian revolutions of the nineteenth century? Yet, our surprise quickly vanished when we gave this exhibition a closer look. Not only is the exhibition of a purely academic nature (looking at historical events as spectacles and thus a-historically), but it is also taking the Commune out of context, describing it by using some of the most common illusions found in the bourgeois world. This article comes as a response to the exhibition. Our aim is not to convince the people responsible to take into account another perspective, thus falling into the liberal ideology of 'all views should be heard'; rather, we aim to remind them that, even in the Disneyland they construct, the distortion of history does not go by unnoticed.

The Paris Commune emerged at the end of the war between Prussia and France. The defeat of France in the battlefields brought the Prussian army outside Paris, with the subsequent result of the formation of the National Guard. "Paris could not[...] defend itself without arming the working class, without transforming it into a military force and without training it militarily for war. But when Paris is armed, that means that the revolution is armed." (K. Marx, Declaration of the General Council of the International Association of Workers for the civil war in France in 1871). When the chief general of France, Thiers, decided to surrender to Prussia the armed people of Paris refused to give back their weapons and declared the Paris Commune.

The library exhibition claims that this was a result of the nationalistic ideas of the masses and the fact that "... many Parisians who had borne the brunt of the recent German offensive on behalf of their country only to have surrender forced on them, felt angry and betrayed" (quote from the library exhibition). Yet, this presupposition clearly ignores a variety of facts visible to anyone who looks at the Paris Commune: firstly, on the 30th of March, the Commune declared that all foreigners could be elected in the Commune because "... the flag of the Commune was the flag of international democracy". Secondly, this explanation fails to explain -or comprehend- the fact that the Communards destroyed on the 12th of April the monument of the victory of Vendome for being a symbol of nationalism and hatred among the people. The crucial role played by the foreigners in, and their treatment by, the Commune simply forbids the allegation that the uprising was a result of national pride.

Contrary to the ideological utterances found in the library exhibition, the Commune was to serve as the lever for uprooting the economical foundations upon which rests the existence of classes, and it did so by establishing its dominance over the organisation of social life on the basis of a rejection of capitalist social relations and of the state apparatus.

The establishment of the Commune started with the formation of the municipal councillors, chosen by universal suffrage, responsible and revocable at all times, the majority of whom were workers. For the first time after 1848, the streets of Paris were safe, and that with the absence of the police. "We, said a member of the Commune, hear no longer of assassinations, theft and personal assault; it seems indeed as if the police had dragged along with it to Versailles all its conservative friends."

At one point, the library exhibition claims that although "... from the very outset the Commune was associated in the public mind to Marxism, [but], beyond the similarity in name, the Commune had nothing to do with communism" (quote from the library exhibition). But what is communism if not the conscious decision of the workers themselves to take control of their lives through an armed revolution? How can this claim be accepted when all the acts of the Commune (abolition of private property; abolition of the military service; abolition of the rents owed to the rich; the creation of workers' councils by giving all power over the factories to those who worked in them; the equation of all salaries in the Commune to those of the workers; etc) point to the direction of the destruction of the class based society and of class dominance?

As soon as Thiers had realised what was going on, he begged the Prussians to help him liberate Paris. The refusal of the Germans meant that Thiers was to perform the task by himself. The army started gathering in Versailles, and the battles with the Communards began. Although the Communards managed to hold their positions for some time, the constant bombing of Paris and the lack of co-ordination eventually led to the downfall of the Commune. In the aftermath, more than 20,000 people were executed, whereas thousands were imprisoned or exiled.

Surely, many mistakes were committed. The refusal, for example, to seize the French National Bank at a time when money was desperately needed was of vital importance. Or else, the existence of the armed artists who defended the Notre Dame from the arsonists in the name of an eternal aesthetic value, signified that the Communards were still indecisive in regards to their objectives and aims.

The internal problem of coherence does fall upon the spectre of the Commune, but "... it is time to examine the Commune not just as an outmoded example of revolutionary primitivism, all of whose mistakes are easily overcome, but as a positive experiment whose whole truth has not been rediscovered or fulfilled to this day."(Internationale Situationniste, Theses on the Paris Commune, 1962)

The attempt to present the Paris Commune as a nationalistic revolt, mainly characterised by a senseless mob1 unable to even understand its own powers, testifies for the desire to eradicate the historical memory of any struggle for human liberation. Yet, what appears to have been one of the failures of the workers' movement, remains one of its most important successes so far.

1. At some point of the text accompanying the library exhibition, it is claimed that "... the generals were taken into custody by their own men and clumsily shot in front of the mob". Surely, the geniuses who wrote this might have done a little more research before uttering such nonsense. What actually happened was that the two generals (Lekonte and Thomas) ordered their troops to open fire at an unarmed workers demonstration. When the soldiers refused, the generals started swearing at them with rage, something which resulted into the soldiers turning their guns against the generals themselves and shooting them instead. Clearly, this was an act of justified proletarian outrage and not one of a ruthless mob as they wish to present it.

A short history of the Paris Commune, weak on details of the revolution and working class organisation but with good information about the makeup of the elected Communards and details of the fighting and repression at the end of the Commune.
Image 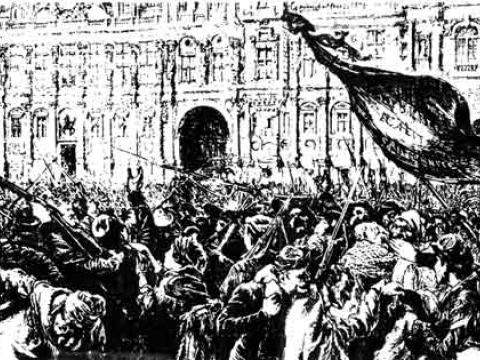 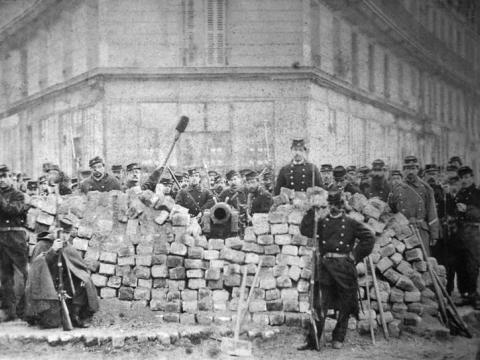 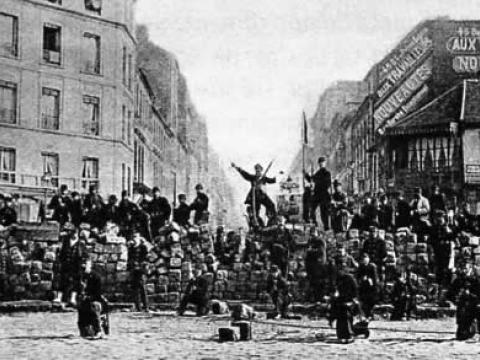