Article from Black Flag #219 (2000) on the hypocrisy of Unionist politicians' outrage at the appointment of Republicans to prominent positions following the Good Friday Agreement.

NB: This piece did not appear in the printed version of the magazine but was included in the web version at flag.blackened.net

The selection, 20 months on from the Good Friday Agreement, of the 12-member power-sharing executive, has left hard-line unionists furious. The Democratic Unionist party has described the holding of ministerial office by Sinn Fein's Martin McGuiness (education) and Bairbre de Brun (health) as casting "a shadow over the so-called new dawn in Northern Ireland." Ian Paisley probably gave the game away when he condemned the fact that McGuiness was in charge of primary and secondary education and the SDLP's Sean Farren had control of higher education.

For all the bluster, Paisley's concern was not with supposed "paramilitaries" entering the political arena, but the holding of office by Catholics per se. The Guardian (30/11/99) appeared fascinated by the idea that McGuiness, who "left school at 15 without qualifications" could presume to handle his brief at all. More than one taboo it appears has been broken – for the Unionists it was the presence of Taigs in the government, for the liberal middle classes it was the invasion of the unskilled working classes onto their terrain!1

As always, violence and the pursuit of political aims through the use of force are presumed to be a historical baggage of the nationalists and Loyalist paramilitaries of the Progressive Unionists alone. It's worth, then, looking at the background of the "respectable" Unionist leader in Parliament Buildings.
David Trimble is seen as a fervent opponent of the politics of the gun. Leaving aside the allegations made by Jim Sands in Sean McPhilemy's book "The Committee", Trimble was a member of William Craig's Ulster Vanguard movement, and was political adviser to Craig when he told a 1972 rally in Belfast's Ormeau Park

"We must build up a dossier of the men and women who are a menace to this country because if and when the politicians fail us, it may be our job to liquidate the enemy."

Trimble was also involved in the Ulster Club's opposition to the Anglo-Irish Agreement, and said of the campaign,

"I would personally draw the line at terrorism and serious violence. But if we are talking about a campaign that involves demonstrations and so on, then a certain element of violence might be inescapable."2

In July 1996, Trimble, who, at the time "would never talk to terrorists", met mid-Ulster UVF murderer Billy "King Rat" Wright at the church hall at Drumcree, around the time Wright was involved in the killing of a catholic taxi driver, Michael McGoldrick.

Nor is it the case that the guns, which have echoed throughout the period of deadlock over decommissioning, have been those of nationalists. A variety of Loyalist front organisations have continued to ply their trade throughout. In November, a Loyalist death list was discovered at Stoneycroft Orange Hall in South Antrim. The list contained over 300 names. Included on the list were Sinn Fein councillors Sean Hayes and Alex Maskey and Lower Ormeau Concerned Community spokesperson Gerard Rice. Only a handful of those on the list have been warned by the RUC of the threat against them. The lists are believed to include copies of British army files compiled as recently as 1997. Since the lists were discovered a North Belfast family on the lists have been targeted in a pipe bomb attack and five people in the Newry area have been sent letters containing a bullet and signed OV (Orange Volunteers).

Community activist Michael O'Hara, chairperson of the Short Strand Residents Group, was attacked by a machete wielding Loyalist group on 19 November. There is speculation that the attack was the work of the LVF. In the past few months there have been two pipe bomb attacks and 6 petrol bomb attacks in the Short Strand enclave and 2 British soldiers were caught by local Republicans after they took part in a loyalist gang attack on the area. Both the Orange Volunteers (a flag of convenience for the LVF) and the Red Hand Defenders (members of the UDA) continue to recruit and actively target nationalists. Among Loyalists recently arrested, one, Clifford Peebles, was a Protestant fundamentalist pastor, and member of Families Against Intimidation and Terror. Peebles was arrested in possession of a pipe bomb and hand grenades.

The majority of both communities in the six counties will welcome the "normalisation" of politics through the Good Friday Agreement. Whether the interests of working class communities of either side can be met through the Stormont coalition remains to be seen (although we can guess!) Amidst the mock-outrage over "paramilitaries" in Parliament, though, we should not forget that men like Trimble and Paisley were quite prepared to support violence in defence of a sectarian state, or that paramilitaries armed by the British state continue to actively target nationalists, using information supplied by that state; a state which purports to support the peace process.

Yes We Have No Bananas: Class and Sectarianism in Northern Ireland by T.J.

Black Flag article from the 2000s about class and other divisions in Northern Ireland / the six counties.
Image 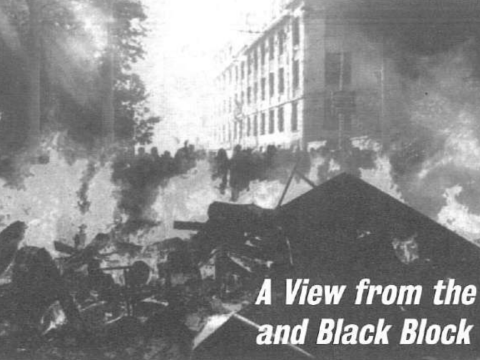 S26: Postcard From Prague: A View From The Red And Black Block 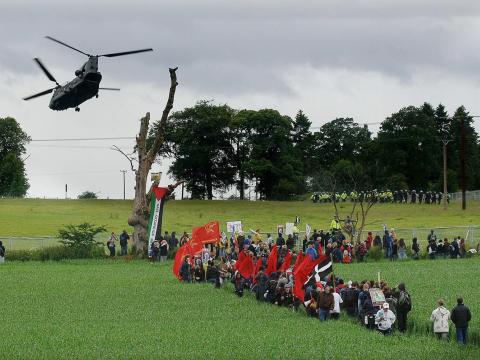 Black Flag article on protests against the G8 summit at Gleneagles in Scotland in 2005.