A short article about a strike against pay and break-time cuts at a Citroen factory in France, 2005.

The management tried with various measures to cut extra-payment and reduce break-time, which is made easier for them by the legal changes (see the 35-hours law). The strike kicked off when the management announced not to pay the days off which were imposed by the management itself. For 2005 40 days off were planned, the eight days in March would mean a wage loss of 177 Euros. The struggle started on the shop-floor level.

On Wednesday, 2nd of March, during an information meeting the management announced that the year 2005 will include 40 days off, some of which will not be paid. At the beginning of the afternoon, 17 workers from the ‚sellerie‘ department [saddlery], where the car interior is equipped with seats etc., put down their tools and demanded a 100 percent payment for the days in question. (This department is due to hard work conditions mainly composed of young, low-qualified workers). These workers went around the department getting other colleagues to come out on strike. At the change of shifts (1:00 p.m.) about 150 strikers welcomed the next shift.

Later on 250 workers were engaged in the conflict and when the night shift arrived (8:00 p.m.), production in the ‚sellerie‘ department had been brought to a stand-still. However, due to the production process and the stocks available, not the whole factory was blocked. The following Thursday (3rd of March) the three shifts of the ‚sellerie‘ (250 out of 350 workers) were on strike and tried to spread the strike to the ‚Talerie‘ (car bodies making [forging press department]) but without clear success. Surprised at the beginning, the unions quickly arrived (the CGT is lead by Trotskyist members of Lutte Ouvrière and some of them were among those who initated the strike) and tried to cool down things. As Friday, 4th of March, was already a day off, everybody was looking to the following Monday, 7th of March.

On the 7th of March somewhere between 400 and 700 workers marched through the factory (we do not exactly know which part of the factory was crossed by the demo) in order to convince others to stop working. But all they received was some sympathy, and not an all out strike. The management was forced to negotiate on one hand, but on the other hand they reorganized the production in the ‚sellerie‘ by regrouping workers as follows: one shift completely on strike, one completely at work and the third half and half.

A first agreement signed by the unions on Wednesday 9th (except by the CGT, for the above mentioned reasons) did not result in the end of strike at the ‚sellerie‘, but the strikers remained isolated. The production of cars was not blocked (to be more accurate we are looking for production figures for March to see what really was the percentage of drop in the production, but management seems not to be eager to display them openly). Tuesday 10th was a national day of action called by the unions. There were no banners from the strikers of Aulnay, but alongside the demo the workers distributed a short leaflet (signed ‚striking workers from Aulnay‘ and inspired by Lutte Ouvrière explaining the strike reasons and objectives).

After that, the strike slowly decreased. The management proposed that 30 days off will be paid during 2005, the 20 remaining during 2006 and even possibly 2007, plus some compensations for transport costs and shifting of some bonus delivery in order to reduce the cost of the strike for the strikers. Isolation of the strikers, adamant management and a not so bad agreement lead the remaining strikers to cease their movement on the 14th of March. As far as we know, striking workers do not have the feeling that the movement was defeated. Perhaps a first step in a longer fight.

Additional comment (sent later)
What we have heard about the strike:
1) Before the strike broke out on Wednesday, Lutte Ouvrière militants with other fellow workers had created a committee for the strike organization. During the strike it was this commitee which was promoted as the organizer of the strike by all those in struggle.
2) The workers of the ‘sellerie’ remained isolated not because of the union’s strategy, but because other workers did not want to go on strike.
3) Nevertheless the strikers remained united and perceived their strike as being successfull and the mood was high. After trying to continue the strike as long as possible they organised a big "fiesta" to celebrate their strike.

This is a comment on the Citroën strike, sent to us by a comrade from ‘Mouvement Communiste’.

Mouvement Communiste on a short wildcat strike of agency worker's in France in 2007. 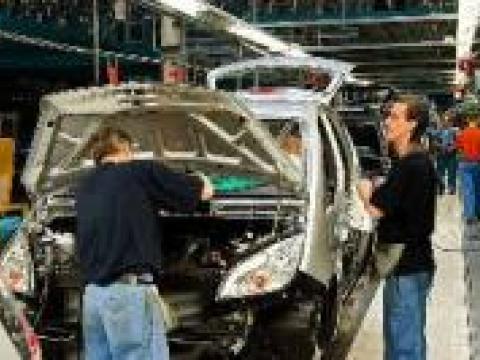