A short account of a little known political death in New Zealand. In 1982, an anarchist punk rocker attempted to blow up the Wanganui police computer. He blew himself up in the process.

A GELLY PARTY AT WANGANUI
By Class War Aotearoa

On November 18, 1982 at 12.35 a.m., Neil Roberts, a 22 year old punk anarchist, walked up to the entrance of the building which housed the Wanganui police computer. Two security guards in the building saw Neil approach with a carrybag on his shoulder. As the guard reached to activate a remote speaker in the foyer and ask him what he wanted, Neil bent over and there was a flash and a huge explosion. The blast could be felt for miles, and buildings were rocked up to 400 metres away.

Neil was killed instantly when the gelignite bomb he was carrying exploded. Pieces of his body were found up to 65 metres away. Nobody else was hurt, and damage was described as "confined to mangling the armoured glass main doors and the foyer of the building." But if Neil had in fact shut down the whole computer, we would of course expect to hear a similar story: "no damage, just ruined the front door", as they would be reluctant to let us know that it was so easy to take the computer out. The building was "designed to survive such a blast", and (according to the regime - and we know how accurate they are!), survive it did.

Before he died, Neil spraypainted a slogan on a public toilet block near the computer building: "WE HAVE MAINTAINED A SILENCE CLOSELY RESEMBLING STUPIDITY" followed by the anarchy is order sign (A circled by an O) and the words "anarchy - peace thinking".

There was an atmosphere of complete shock throughout Aotearoa after Neil's death. This type of thing occurred overseas, not here in little old conservative NZ. Newspapers could not understand why Neil had managed to blow himself to pieces. They called it a "bizarre act of self-destruction." There was a fear that there was an "anarchist conspiracy" to blow up government buildings throughout NZ. In fact, this is what the Prime Minister, Muldoon, suggested on TV. Security was stepped up outside key government buildings. But it was soon realised that no such "conspiracy" existed, as Neil had acted alone.

Letters flowed in to the press. To some, it confirmed the stereotype that anarchism means bombs and pure negativity and destruction. The Christchurch Press claimed that Neil was "the misfit son of a rich Auckland family" and that anarchism was a "sad, flippant kind of nihilism." Many letters defended Neil and anarchism. One writer stated: "Anarchism is ... based on the belief that humans can live with one another without coercion... The young man was sad and undoubtedly despairing, but hardly flippant. Surely we should consider why he and so many other young people are in such angry despair, rather than trivialise and discount his action as that of a 'misfit'. When we see the number of people on the dole, the preparations for nuclear war, and other evidence of our rulers' crazy incompetence and our own apathy, is it really so hard to understand why young people shout in our faces, 'We have maintained a silence closely resembling stupidity.'?"

THE ACCIDENTAL DEATH OF AN ANARCHIST

There is some debate as to whether Neil attempted to kill himself or accidently blew himself up. It is certain that he planned the bombing well in advance. Neil had visited Wanganui two weeks before the bombing with a friend, and were noticed by many locals because they were wearing safety pins and razors in their ears. The day he left for Wanganui, he told friends, "I am going to Wanganui to do something frightful. If I should blow up the Wanganui computer, the cops will be around."

The government in an inquest came to the conclusion that Neil was a suicide bomber. It suited them to trivialise the incident, to make Neil seem like a sorry misfit rather than consider why he actually targetted the police computer. It seems the main evidence for this was a tattoo on Neil's chest: "This punk won't see 23. No future." The inquest was conducted without any evidence from fellow anarchist punks. One Aucklander who knew Neil claimed he wanted to die for his anarchist beliefs, and talked of suicide, and either taking the computer centre or Beehive with him. Another friend claimed that Neil had "talked of suicide for three years and he had every intention of doing it [a suicide bombing]. It was not an act of cowardice... it was making a statement with his life." The amount of gelignite Neil had was many, many times over the amount needed to blow himseolf up. It is possible that Neil intended to blow up the Wanganui police computer, and by mistake, through inexperience with explosives, could have set the bomb off accidently. Whether it was a suicide or accident, it will never be known for sure.

It is important to put Neil's act in context. By 1982, there was a real climate of fear of a police state in NZ developing under PM Robert "Piggy" Muldoon. Muldoon was a complete authoritarian, a proto-fascist, a more rabid version of the ultra-conservative post-war generation that ruled NZ politics in the 1960s. Muldoon was the kiwi equivalent of Nixon in the U$A. What was scary is that he was popular with a large chunk of the population. Many people seemed to lap up his left-bashing, union-bashing, sexist, racist, law-and-order policies. Muldoon did things like dawn raids on Pacific Islanders (the accusation: "Over-staying"), and allowed the 1981 Springbok Tour by the apartheid South African rugby team to go ahead. The Tour (as it was known) was very brutal. Tens of thousands of kiwis got out on the streets and tried to stop the thugby games from going ahead, and the police beat many up in a massive operation. Many suffered severe injuries, including one actor, playing a clown in an effort to defuse tension between the sides, but who was severely wounded by police baton attacks.

In 1982, a year after the Springbok Tour and the climate of fear and polarisation that the tour had created, Neil targetted the police central computer at Wanganui because it held all the national police records: it was a symbol of the creeping fascism of Muldoon and sections of the ruling class at the time. In 1978, there had been massive protests against an attempt by Muldoon to increase the power of the secret police, the SIS. The computer had become a symbol of Muldoonist authoritarianism since it was first installed in the mid 1970s (when several protest groups including the PYM organised campaigns against it.)

Neil was part of the anarchist punk rock scene at the time, which was then in its infancy. A very loose community of anarchist punks throughout Aotearoa was being formed by the early 1980s, which was to flourish by the mid to late 1980s. Punk is often dismissed as negative and nihilistic, but in the early 80s it was a child of its time: not only a protest against the stifling and boring cultural conformity in Aotearoa, but also an understandably pessimistic reaction to the state of the kiwi society at the time. The recession in the economy from the 1970s created a new political mood that things in godzone were getting worse and worse. New Zealand slipped from being one of the richest countries in the world in the 1960s to one with unemployment and a recession and a severe authoritarian law 'n order government under Muldoon to boot. So Neil's reaction is more understandable in this context. Liverpool 1981 - An Eye Witness Account of the Toxteth Riots

First starbucks strike in the world!

It was bound to happen eventually -- and it happened today in New Zealand. Low-paid Starbucks workers walked off the job and formed a picket line. 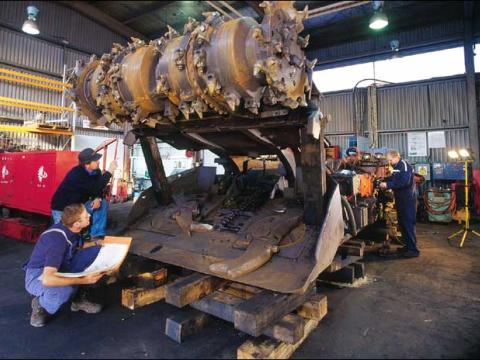